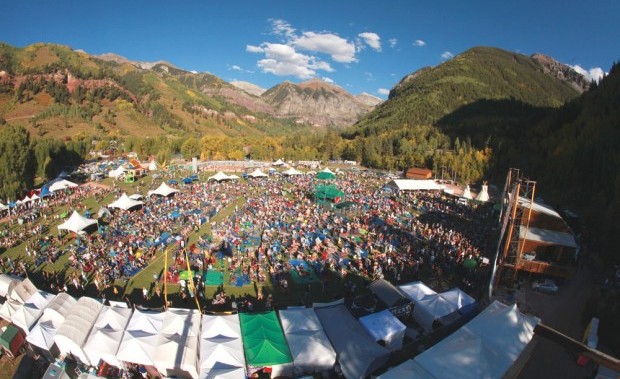 Field of Dreamers: Headliner Robert Plant will ignite the crowd at Telluride (seen here during Blues and Brews) this year. Photo: Barry Brecheisen

Waterfront Music Festival and Campout
May 20-22, Bellvue
The festival season kicks off with this affair near Fort Collins in a town famed for its grange and hoedowns.
Hot Acts: Head for the Hills, The Billy and Jillian Nershi Duo, Gregory Alan Isakov, Whiskey Tango
Escape the Crowds: Mountain biking on the Mill Creek Trail and Lory State Park.

Bands on the Rise

Three Things about Telluride Bluegrass that Chap My Ass

Collegiate Peaks Music Festival
July 28-30, Buena Vista
The music here is young and made for dancing.
Hot Acts: Keller Williams, Kyle Hollingsworth Band, Bonfire Dub with DJ Psychonaut, Missed The Boat, Elephant Revival, Super Jam, DJ Kalani, Moon Glory featuring Loulou from Thievery Corporation, The Eames Brothers, Euforquestra, The Motet
Escape the Crowds: Nab a 14er… we suggest Princeton or perhaps Elbert, so you can claim you got the highest in the state.

Telluride Blues and Brews
September 16-18, Telluride
Telluride’s “other” festival celebrates suds and the type of music that makes you want to drown yourself in them—or dan
Hot Acts: Lineup TBA.
Escape the Crowds: Nearby Mount Sneffels is an easy, yet aesthetically pleasing 14er.

Festy Gal: Enhance your festival experience with this gear!

Yampa River Festival and Paddling Life Pro Invitational
May 27–30, Steamboat Springs
Things will get even  wetter and wilder than usual in Steamboat this year as pros duke it out for cash and prizes at Paddling Life’s pro throwdown comp.
Don’t Miss: Emily Jackson

Outside in Aspen
June 10-12, Aspen
This new festival (in its second year) gets you out with elite athletes and outfitters learning and enjoying evryhitng from SUP to road biking to fly fishing. Everything revolves around an Adventure Base Camp with gear, talks on sport and giveaways.
Don’t Miss: Pool party at the Sky Hotel!

Lyons Outdoor Games
June 10-12, Lyons
“The little town that festivals” gets down with everything from whitewater paddling, to fly fishing, to mountian biking, to chainsaw carving.
Don’t Miss: The Canine Cannonball

Rocky Mountain Bike Fest
June 11-12, Denver
Held in tandem with the Denver Century Ride, this is the place to be if bikes turn your crank.
Don’t Miss: The Colorado Crusier Jamboree

FIBArk Whitewater Festival
June 15-19, Salida
At this point, it is as much cultural happening as it is whitewater festival. Anything you can float downriver gets in on the action here—everything from raft races to freestyle comps to non-river events including a bike race and running races.
Don’t Miss: Recovery yoga—the final “event.”

Fat Tire Bike Week
June 23-26, Crested Butte
No Colorado town is more proud of its mountain biking resume than the Butte and the eponymous fest bills it self as the oldest such happening on the planet. There are expos, races, rides, debauchery, everything you would expect from the various clans of the fat-tire tribe, but if you go for just one thing, dress in costume and make it to the chainless race.
Don’t Miss: A free concert with Karl Denson’s Tiny Universe.

Gunnison River Festival
June 24-26, Gunnison
The Gunny’s got it going on for this celebration that will showcase the town’s new New Wave whitewater park. Plus, you get all you’d expect from boaters—parties, a downriver race, freestyle comps, SUPs.
Don’t Miss: Jonathan Waterman presenting on the Colorado River (see page 14) at the Gunnison Public Library on June 27.

5Point Film Festival
April 28-May 1, Carbondale
Combining a film festival and a convocation of artists, athletes and explorers, 5Point is sponsored by Patagonia and takes place in core-outdoor Carbondale. Presenters/filmmakers include Timmy O’Neill, Pete McBride, Jer Collins, Fitz Cahall, Renan Ozturk, Nick Rosen, Nick Waggoner and—wait for it—The Baffin Babes.
Don’t Miss: EO illustrator and contributor Jer Collins’ “The Wolf and the Medallion,” a story of climbing untouched summits in China and Mongolia, as told through a letter home from father to son.

Mountainfilm
May 27-30, Telluride
Yep, another festival in Telluride… but leave the hula hoop at home. This event is a cultural happening, not just of films about mountains, adventure, culture, environment and exploration, but also a four-day discussion and celebration of the subject. Special guests will include convicted monkey-wrencher Tim Dechristopher, Shannon Galpin of Mountain2Mountain, two-cup of tea superstar Greg Mortenson, celebrity explorer David De Rotschild and author Terry Tempest Williams—and… the Baffin Babes.
Don’t Miss: Daily Coffee Talks, intimate get togethers with the presenters.

The Ballad of Mutt

Mountain Summit: Mountainfilm
August 25 – 28, Aspen
Can’t make the Mountainfilm event in Telluride. Catch it in Aspen, when the whole shebang goes on tour to the Wheeler Opera House.