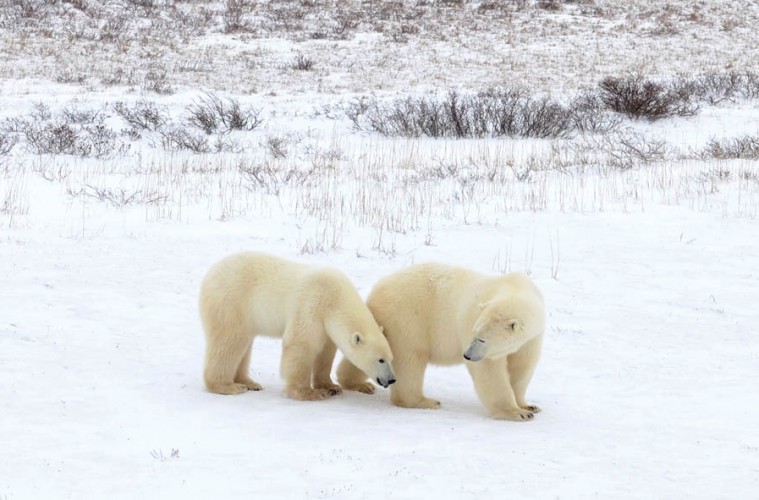 Greenhouse gases have one of the planet’s most charismatic megafauna in serious danger. The more people who see this sad fact in person, the more people care. But can “Conservation Travel” save the polar bear?

On the Manitoba tundra, a polar bear awakens from an early afternoon snooze in a patch of willows, stands, and begins to amble toward me. Were I not sitting inside a Tundra Buggy—a custom all-terrain vehicle designed to navigate subarctic terrain, and protect tourists from these carnivores—I’d be terrified. But inside the bombproof Buggy, which is elevated on six-foot tall wheels, I’m safe to observe the 1,000-pound bear in its natural habitat, take photos, and chat about its behavior with my fellow passengers—much like the wildlife safaris of Africa.

What’s different from your standard wildlife safari is that I’m sitting beside one of the foremost polar bear researchers on the planet, Steven C. Amstrup, PhD, the chief scientist at Polar Bears International. The trip is a first-of-its-kind offering from Canadian outfitter Frontiers North Adventures, where ordinary tourists spend four days in the field hanging out with wildlife biologists and scientists like Amstrup, viewing polar bears, and learning about conservation efforts. If “wildlife safari” and “ecotourism” had a lovechild, this trip would be it.

By day, we follow old military paths worn into the tundra, tracking the normally elusive Ursus maritimus at the time of year when their movement is most predictable—early November. At this time, the bears gather along the shores of Hudson Bay, eagerly awaiting the winter sea ice formation so they can hunt seals after a long summer fast. At nightfall, back at the lodge, tourists and scientists mingle over drinks, dine together, and watch world-renowned polar bear experts present slideshows.

During one such presentation, I learn that since the early 1980s, the Hudson Bay polar bear population is down 22 percent. The culprit? Greenhouse gas emissions, which are causing the Arctic to warm, and the ice on Hudson Bay to form later (and melt sooner). This is shrinking the window when the polar bears can hunt seals—their main food source—out on the ice.

It’s a lot to absorb, both the exhilaration of seeing the bears in their native habitat—moms and cubs, curious young adults approaching the Tundra Buggy, males sparring—and the agitation in learning the details of their impending demise. Amstrup predicts that unless we take action to stop climate change, we will lose two-thirds of all polar bears by the middle of the century, and the rest by the end of the century.

The strong emotions I experience during my visit are exactly what conservation organizations like Polar Bears International are banking on. “Coming up here and seeing a polar bear, looking into its eyes, it can change people, change how they care about the environment,” says Amstrup. There’s even a buzzword for the type of tourism that’s going down in the subarctic tundra: Conservation Travel. And Manitoba, Canada is not the only place where it’s catching on.

In 2013, Colorado-based Natural Habitat Adventures launched an expedition to Mongolia called “In Search of the Snow Leopard.” The trip—a partnership with World Wildlife Fund (WWF), the world’s leading conservation organization—brought 12 tourists together with scientists focused on tracking the snow leopard for conservation research. “The trip sold out in minutes. Literally,” says Ted Martens, VP of marketing and sustainability at Natural Habitat.

Snow Leopard searchers spent the trip out in the field tracking the endangered cat; in remote places few of us have heard of, like the Yamaat Valley near the Russian border, and the Jargalant Hairhan mountains in Khar Us Nuur National Park in central western Mongolia. Despite the team’s concentrated effort, the stealthy snow leopard was not to be found. But the tourists were so inspired, that upon returning home they reconnected and spearheaded a fundraising drive. They raised $24,000 to purchase new data collection equipment for the researchers back in Mongolia.

“That is the culmination of what we’re trying to accomplish with conservation tourism,” says Martens. “Get people out into the field, and inspire them enough that they take action back home.”

The WWF confirms that travel can lead to conservation action. From their donor pool, the people who travel end up giving seven times more over their post-trip lifetime than those who do not. Natural Habitat Adventures has since made their prototype “In Search of” format a regular trip, with the next happening in Namibia in the fall (see below), in search of the desert rhino. Likewise, Frontiers North Adventures has scheduled another “Conservation Journey” for November 2015 (see below).

Still, can conservation travel actually save the polar bear from being melted off the face of the planet? The bears, unlike the snow leopard in Mongolia, aren’t in danger of being shot for poaching or retribution killing. The nearby town of Churchill—the polar bear capital of the world—even has a Polar Bear Alert program that relocates (instead of shooting) bears that get too close to town. Of the 20 of us aboard the Tundra Buggy, a quarter are scientists and researchers already invested in the bear’s survival. That leaves 15 people to potentially change the beasts’ fate. And the problem seems more nuanced than making a donation to Polar Bears International post-trip.

Polar bear experts like Amstrup agree that polar bear conservation is complex. We chat about it over hot cider on the Tundra Buggy, while watching two young bears wrestle. “It kind of turns classic wildlife conservation on its head,” he says. “Polar bear conservation can’t be done in the Arctic, it’s not a matter of putting up a fence or designating a preserve; it’s about stopping the rising temperatures that are destroying their habitat. The only way we can do that is to stop the rise in greenhouse gases, and that happens back home.”

It’s a daunting truth, but Amstrup is hopeful.

“We haven’t yet crossed an irreversible tipping point with climate change,” he says.

Nor are we powerless to act. He says that simple things we do around the house can make a difference. “If everyone in America turned down their thermostat down by one degree, it would save an amount of energy equal to all the energy used by the state of Iowa in one year.”

I look out the window and watch the bears. They’ve quit their wrestling session and one has lain down in the willows to rest. The other catches a whiff of lunch being served on the Tundra Buggy and walks over to investigate. It sniffs the front tire, then walks over toward my window and stops. Rearing back on its hind legs, the bear plants its frying-pan sized paws on the Buggy just below my window and peers up at us.

Amtrup chuckles at the bear’s curiosity. “What we’re really doing is inspiring people to go home and work more toward a sustainable world,” he says. “We can save polar bears.” Looking down through the window at the polar bear as it stretches up even closer toward me, I realize how badly I want Amstrup to be right.

Get out on these conservation tourism trips.

In Search of the Desert Rhino, Namibia

Learn firsthand about rhino conservation in one of Africa’s largest expanses of pure wilderness. nathab.com

Join Biologists to study giant leather back turtles at the Pacuare Nature Reserve, and indulge in a rainforest adventure retreat. adventure-life.com

Explore natural wonders, track tigers and sloth bears, and learn now to be a naturalist on this family adventure. bigfive.com