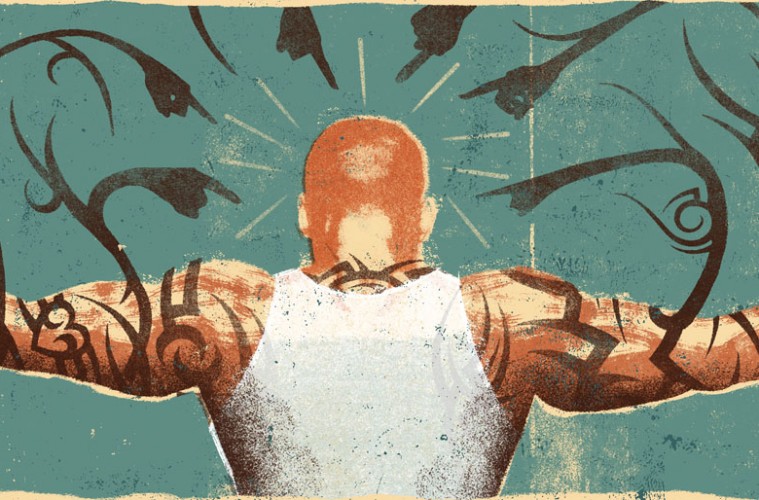 THE JOYS and perils of enjoying SUMMER IN COLORADO

Summertime is critter time, and there is currently a collection of birds, bunnies, lizards and snakes making a season of it in my—I mean our—backyard. I used to be creeped out by the snakes. But now they fascinate me. I especially like how they keep the place clear of mice and gophers.

The only local fauna that isn’t welcome are the tomato-thieving ground squirrels, giant black centipedes (one of whom bit my toe a few summers back, which stung like brimstone) and skunks. Skunks are the worst of all.

Anyone who has ever personally been skunked knows that rectal mist doesn’t smell anything like dank weed or spoiled German beer. It’s more like a diamond-pure corrosive chemical that atomizes in the middle of your brain. Two doggies of ours got an up-close dose to the face once, and I thought they would suffocate in the cloud. Immediately, the red-haired girl and I got splitting headaches and couldn’t sleep for days.

To get the smell out, we tried to bathe the boys with store-bought skunk soap, then Pert shampoo, then can after can of tomato paste which resulted in them running around the yard like furry cannelloni, all to no avail.

Finally, a friend suggested douche, and the red-haired girl went to Walgreens early on a Saturday morning to buy two cases of Massengill. She thought she would escape without undue notice, but four “cute boys” got in line right behind her, eyeballing her purchase as her neck turned as red as her hair. It did get the smell out of the dogs, but it was another month before she would go back to that store.

Speaking of douchebags, is there something about summer that makes them so much more noticeable? Does the sunburned, drunken jackass only emerge after winter, when it’s easier to wear wife-beaters to show off tribal arm tattoos (“And what tribe are you in, Chad?”), and high five “BROS!” while spilling beer on you and your friends at a Red Rocks show?

My dad had a saying about not caring what anyone else was into, as long as they took the time to do it well. But I don’t think being stupid is something anyone would consider doing “well.” And I honestly believe true douchebaggery is a product of stupidity first and foremost.

I mean, what thinking person would wear Vibram FiveFingers as casual wear? Leave their dog in the car with rolled up windows? Get their cat high? Deny climate change? Crowd bicyclists on the shoulder of the road? Dress like a lumberjack in skintight jeans when it’s 80 degrees outside? Honk in standstill I-70 traffic? Leave shitty tips? Crank their stereo at the campground? Or insist on cataloging their dietary restrictions during every meal?

To be more succinct, my working definition of douchebag is anyone who thinks they are the center of the world. Like the kind of people who shoot elephants, because they will be so much more interesting once they have some more intelligent, more iconic animal’s head mounted on their wall.

To misquote Ernest Hemingway, dodging douchebags is key to a successful summer. The first way to do that is to hike into the backcountry—long and far. The second is to go full shut-in, soaking up Vitamin D on your patio or in your backyard, and only venturing out for groceries and alcohol. The third is to immerse yourself in the anonymity of everyman, and go get out front and center of the madding crowd.

Nothing eliminates the sour smell of D-bags more than the immediate connectivity of finding out who your neighbors really are, and learning more about your hometown, too. So if you want to up your level of interactivity and feel more like a local in Elwayville this summer, here are three low budget options to consider.

Have a Picnic: Denver’s outdoor urban recreation system really is first class—including Cheesman, City, Cranmer, Congress and Washington parks in particular—with green fields, a couple geese-filled lakes and well-kept jogging trails local developers would pay billions to be building multi-level apartments on right now. So pack some sandwiches and lots of cold drinks, bring a Frisbee for the dog, and go lay in that grass and daydream about how lucky you are.

Rock Broadway: Colfax gets all the credit for being the most eclectic, freaky thoroughfare in Denver, and Federal has the best Mexican food, but for me, Broadway offers the most ‘all-world’ feel. It’s the one street that lets you tour the Capitol, hit the library, take an art museum detour, stop in several thrift, antique and used bookstores, visit unique dispensaries, catch an independent movie at the Mayan, water up at some classic—and sometimes scary—dive bar, then rock the night fantastic at Herman’s Hideaway before you take the bus (or Uber) home.

Do Something for Someone Else: I say this every summer, mostly because I mean it. But also because giving a homeless person a cup of coffee or a couple bucks, donating blood, adopting a stray, or planting a tree somewhere you can drive by and see how much it’s grown every year also makes you feel better about yourself.

You need to be nice to yourself.

Elevation Outdoors editor-at-large Peter Kray is the author of The God of Skiing. The book has been called “the greatest ski novel of all time.” Buy it here: bit.ly/godofskiing