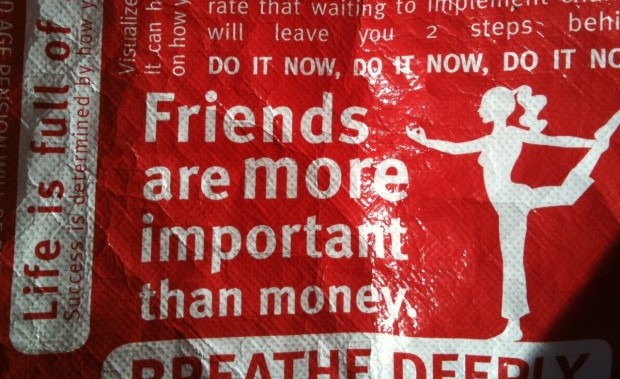 Lululemon: The Worst Copywriting Ever Perpetrated on Consumers?

Ya think? The gang over there must have a hotline directly to the Dalai Lama for this kind of wisdom.

OK, I’m being snarky, I admit it, but because I’ve copped to it I am now immune to all karmic and legal repercussions.

Nevertheless, I’ve been meaning to write something about this for quite some time. I got the itch after we somehow acquired a reusable shopping bag from (presumably) Lululemon Athletica. I can’t be sure because I didn’t bring it home, but I’m assuming my flyass wife did…because she’s got some of those tight-fitting Lululemon pants.

First off–kudos to Lululemon because those things look GOOD.

Secondly, Lululemon, who in god’s name is doing the copywriting and marketing over there? I must’ve carried this rumply sack around for weeks before I noticed the dunderheaded, vacuous drivel printed on the outside. I assume I looked like a 14-carat imbecile with that thing, but only through the kindness of others was I not beaten or at least publicly humiliated. The bag, though, is covered with the most inane platitudes I’ve ever read in a public place (I read my own platitudes in the privacy of my home, thank you very much, where most horseshit platitudes should remain).

After carrying the thing around, it ended up on our kitchen counter and I began absentmindedly (shame on me, because the bag itself demands I live in the moment) scanning the text contained thereupon. Sadly with each successive slogan I only became more outraged. I mean, it’s like you took the rejects from the cutting floor over at White-Liberal-Yogi greeting cards or something. Either that or somebody got one of those daily calendars with inspiring yoga quotations on it and decided to pass it off as original ad copy. Another gem: Yeah, well, Thomas Jefferson and a few others might disagree, dickweed.

It’s not like I’m cheap-shotting here. This is the easiest stuff imaginable. I mean, is anybody at Lululemon the least bit self-conscious about sounding like a pack of completely self-absorbed, clueless, congratulatory and entitled white weenies? Is anybody actually reading the Yoga Sutras or some substantial Buddhism, instead of this hackneyed, cursory, bumper-sticker pulp? Of course the perfectly sculpted Land Rover-driving hipcrowd “practicing” yoga at any of a dozen studios in Boulder can do this…but the rest of the non-slow-food-eating folks working for a living? And you need a goddam semi-colon or period before Vancouver. Dammit!