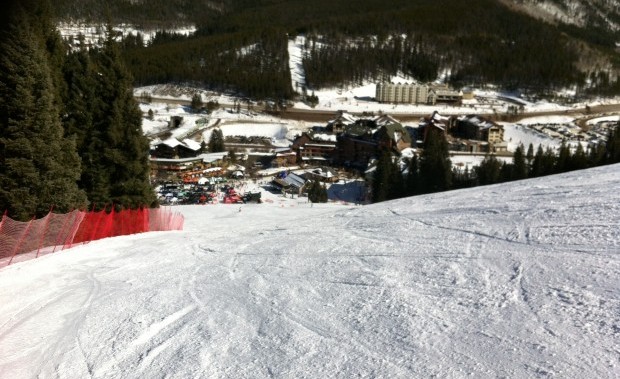 For my second rando race of the year I chose the relatively short event at Winter Park. The race ran as part of the Ski Industry Association trade show, so there were actually people standing around at the start, besides the racers. Right on! Bluebird weather and a fun scene at Winter Park

Monday, January 30 delivered splitter weather, in addition to the news that three Italian National Team guys would be on the start. My buddies at SCARPA had the perverse idea to import them for the race in Crested Butte the weekend prior, so they hung out and decided to deliver the beatdown at the SIA event the following week. Lucky us.

Naturally I was not the least bit intimidated. In fact, I overheard one Italian say to the other, “Guarda a questo tipo qui…e un cinghiale.” I looked it up online and it means, “Check out this baller. He’s tough as nails, let’s gang up on him.”

Had the Italians–dressed in one-piece speedsuits–played by fair means, I have no doubt I would have vanquished them…but alas. A map of the pain

Back in the day, when Winter Park was less than $30 a day for a pass and my knees still had good cartilage in them, we used to ski much of the terrain the course covered–which made the event double cool. Balch and Outhouse were two of our favorite bump runs and I skitched down both of them on my 161cm crazy-light Dynafit skis.

I’m betting I looked better back in ’88, but I know one thing: I go way faster uphill these days. I’m still loving my Dynafit TLT 5’s (yes, the badass carbon ones!) and believe it or not, I’m back under 165 lbs. Not exactly bike-racing weight, but getting there.

All joking aside about results and the Italians (who were totally cool guys, chatting at the start and being pretty relaxed) aside, I’m still amazed at how fast these guys and girls go. The Italians finished in 45 minutes–and I bombed through at 1:08, in 19th place (I think). On a course that short, to put 23 minutes into me…holy cow. The winning trio looked like Nordic racers more than skiers, so I guess that’s the drill at the elite level.

If you haven’t done a COSMIC rando race, you should. The vibe is really chill, everybody’s relaxed, and the races are a total blast…in addition to a crusher workout. I ended up side-by-side with my bud Brian McGovern from Steamboat, whom I’d finished beside at Sunlight. He’s a patroller and has a really cruiser style, like he’s not working at all. Me? Well, you know the drill–I sweat, I moan, and somehow finish. There are a couple long, partner events coming up (Breck and Aspen). Grab a friend and go steady all day–you will DIG it!

The expo area at the base had the usual to-die-for gear. Dynafit was showing off its new 115mm-underfoot Huascaran ski–and Eric Henderson was actually next to me for most of the first climb of the race wearing it. Ouch! The SCARPA gang was showing off its impeccable footwear, too, including their Alien rando boot, which looks awesome. I’ll try to ski it soon. Handmade in Italy, by craftsmen and women, in the Dolomites

I dropped by SkiLogik booth, too, and hefted its featherweight Piton ski. It’s not quite as light as a Manslu, but my gut tells me it’ll handle hard snow a bit better, given its flex and snap. I’m dying to ski it, but to date they don’t have any mounted with Dynafits…which, ladies and gentlemen, is the only way I roll these days. My jingus iPhone photo of the Piton. Check it out online–as gorgeous as the rest of the SkiLogik boards. Must. Have. Some.

Big thanks to Pete Swenson and the Dynafit gang (including you, Donny Roth, you sexy bald man) for the hospitality and helping to get rando racing out there. Big kudos to SCARPA for importing three DOC Italian racers and organizing–it’s a great community here in Colorado and rando skiing is just one venue in which to enjoy it. Come check it out!