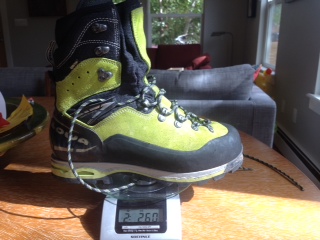 Rob CoppolilloOctober 11, 2013
Master of None0 Comments 0

The best all-around boot I’ve ever worn–the Lowa Weisshorn ($460; 2 lbs. 2 oz., 981 g without footbed each; home verified). I’ve been lucky enough to try a bunch of boots over the years, including similar models like SCARPA’s Mont Blanc and LaSportiva’s Nepal Extreme, which are both excellent in their own right(s). The Weisshorn, though, walks better than the Nepal and climbs better than the Mont Blanc. The Weisshorn sets a pretty high bar for alpine footwear. Loving the ankle mobility in the Weisshorn

I pulled out the stock footbed, which is a nicer rig than most. It’s aluminum- and fleece-lined, but I prefer my customs. Once I slid these in, the Weisshorns felt like a lightweight hiker, rather than an insulated winter boot.

Lowa starts with a Vibram Dolent sole, which sports a significantly different lug pattern than old-school Vibram versions. I didn’t notice a difference in terms of grip or wear (I’ve put 30 days on them so far), just the usual Vibram quality.

A full-length layer of polyurethane (with a 6mm/8mm stabilizer in there, too) spans the footbed and above that is an embedded carbon midsole. I suspect this is the key to the Weisshorns ultra-comfortable walking performance. The boots have a bit of rocker built into them, but also allow tiny bit of flex in the last quarter of the sole, beneath your toes (not enough that it felt sketchy in a crampon like BD’s Cyborg or Petzl’s Vasak). The magic of carbon lies in its ability to be absolutely strong in one dimension (torsionally), while flexing a certain amount in another (under the ball of your foot). Cycling engineers have long known this, effectively “tuning” a bike frame’s performance in just this way. Crazy stiff here, supple there. Lowa does it to great effect in the Weisshorn.

Vibram’s Dolent sole, with a nice climbing zone on the front

I tested these on everything from an 8.5-hour hike on dry, rocky trails above Boulder (pre-flood, when we still had trails!) to an all-day affair on exposed glacial ice on Mount Baker to a 15-hour day of mixed climbing and on Mount Shuksan’s north face and Fisher Chimneys. The Weisshorn is the only mountain boot I’ve ever tried that doesn’t leave you wondering if you should take a more comfortable boot but sacrifice climbing, or vice versa. The only time I wore anything else is when I didn’t need insulation and wanted to save the weight. They’re more comfortable than my red Trangos (boots I absolutely love) and climb rock almost as well. That’s saying something!

The Weisshorn fits wider through the front of the foot than Lowa’s Vertical GTX, a boot I reviewed HERE. The Vertical is more specialized for ice and mixed, and is a bit lighter, too. The Weisshorn leaves your toes a bit of wiggle room. I sized mine a half-size larger than my Verticals and think it was the right call. The Weisshorn also feels more traditionally lasted, while the Vertical feels more straight lasted (meaning it’s designed for a person whose foot is roughly divided in half in terms of volume by the second toe). Lighter than a Nepal or the Mont Blanc, the Weisshorn’s main competitors

Lowa uses a similar lacing system to LaSportiva, allowing you to have the ankle and lower foot tightened or loosened independently of the other. I’m usually indifferent to stuff like this, but coupled with the Weisshorn’s ankle design, the lacing comes into play. Both the Vertical and Weisshorn allow more range of movement to the rear than any boot I’ve worn, red Trangos included. As you can see from the pics, Lowa cuts the leather upper downward, towards the Achilles. Compare the difference in height between the lower extent of the green leather in the rear to the upper laces–super support up front when flexing forward, but relatively little to restrict movement when flexing to the rear.

I did my advanced alpine course and aspirant exam this September in the Cascades. Examiners graded our French technique (flat-footing or pied a plat) throughout the exam and in prepping for this I noticed my Weisshorn’s huge range of motion to the rear. Not necessarily that important for some people, but on a route like Shuksan’s north face, with thousands of feet of moderately angled ice, being able to keep the feet flat is important. Anyway–the Lowa ankle is awesome. Demo a pair to find out if it works for you. Lowa uses split-grain leather (they literally split full-grain cow leather in two), saving some weight, but hopefully not sacrificing durability. My Nepal Extremes (10 years old and still crushing) have made do with split-grain, so I bet it’s all fine. There’s a bit of Cordura on the exterior, too.

I’m not a huge fan of Gore-tex, but it’s the standard waterproof liner in high-end boots, so there you have it. Gore’s insulation product, Duratherm, feels plenty warm, on par with Thinsulate and other materials, though I’ve never seen any hard data on R values, etc. In my experience, though, if it keeps up with Thinsulate, it’ll be great. I’ve only used the Duratherm in relatively mild temps thus far. Stay tuned for more info, particularly if this shutdown ends and we can get up to the Park!

The Lowa folks expect a women’s version out this winter, in dealers possibly as early as January–keep your eyes peeled.

Lowa doesn’t have the traction out here that it does back East, but if you plan to attend the Bozeman, Ouray, or North Conway Ice Fests this winter, you’ll find Lowa there. Try ‘em! Make sure to do some walking and flat-footing, too–don’t just jump on steep ice. The Weisshorns climb really well, but I think their strength is in doing everything else just as capably. Check ‘em out!

Rob Coppolillo is a freelance writer based in Boulder, Colorado. He’s the author of Holy Spokes: A Biking Bible for Everyone and a contributing editor at Elevation Outdoors. He’s also an AMGA/IFMGA aspirant guide in the rock, alpine, and ski disciplines, as well as an AIARE 1, 2, and 3 avalanche professional.