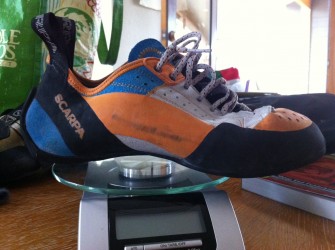 SCARPA’s New Techno (Worth the Wait!)

The venerable SCARPA Techno gets an upgrade, though not necessarily a redesign, for 2014 and here’s your sneak preview. I manged to snag a set from the offices here in Boulder and sadly they keep asking for them back. Before I surrender the goods, I thought I’d snap a few pics and share the new shoe with the world.

The new Techno will be out spring 2014 and retail for $145 (282g versus 266g for the older version), last I heard. I had the chance to chat with designer Heinz Mariacher a bit this summer and he had a few things to say about the new version. My Italian isn’t perfect to begin with and add to that Mariacher’s Sudtirolese accent, and well, let’s just say I verified all this with SCARPA’s (English-speaking) Sales Manager, Mark Matthews.

“The last is the same, just different patterning,” says Matthews. Mariacher explained the newer shoe feels like a more “performance” version, with only a little change in the construction and materials.

I had the chance to taste wine with some real experts once and one of the things we did was try the same wine in different glasses. I would’ve never guessed it was the same juice, that’s for sure. Climbing in this year’s Techno seems like the same exercise–it might be the same last, but slight changes to the heel and toe dial this thing up, big time.

I’ve climbed and guided in the older Techno for two years now and I’m on my second resole in ’em. They’re currently being discontinued, so it’s a great time to snag a cheap pair. I’ve loved mine; they’re comfortable, they climb slabs and cracks really well, and the only time they feel like a compromise is on overhanging terrain (particularly in the gym) or on tiny edges.

The new Techno, though not downturned at all, feels like a much more aggressive, high-performance shoe. I did two gym sessions in them and climbed about 20 pitches outdoors (Eldo, BoCan sport) during my temporary ownership. I wouldn’t have guessed they’re on the old Techno last–they climb far better on steep terrain.

The biggest difference between the two shoes is the heel. Where the old model used a small piece of webbing to snug it up, the newer model uses Mariacher’s characteristic active randing around the heel, putting the toes in more of a performance position. The trade-off is a bit of comfort. I have both models in a 42 and the older model breaks in much more in the tradition of the LaSportiva Mythos (though it doesn’t bag out nearly as much), another Mariacher shoe. The new Techno, over my time with it, climbed consistently from start to finish, without any loss in performance or sensitivity. I have a high-arch, low-volume foot, so take that into account with my blathering about fit, performance, etc.

The toe profile on the two shoes ends up being slightly different, too. The old Techno is a thin-crack weapon. The toe chisels into tiny seams where other shoes are left to edge along the outside of the crack. The new Techno’s performance in the toe seems to mean a slightly more traditional profile. Have a look. SCARPA/Mariacher puts a bit of their less grippy rubber across the toe patch, where the older Techno had more traditional, unlined suede construction. I’m betting this accounts for the new shoe’s consistent performance pitch after pitch.

I’ve hung on to the Technos as long as I can. The SCARPA folks are ready to put out a fatwa on me, so it’s time I bring ’em back. I’ll be waiting for the production models and my only real suggestion in the meantime would be the color scheme. This version has a bit of a Bronco thing going on–not totally heinous, but not quite as chill as the older Techno. I’d stick with green-tan theme, but that’s just me. Outdated, old-school, or something like that!

Another great shoe from SCARPA and one to watch for. The new Techno climbs really well, it’s still Italian made, and the new fit should fit a wider variety of feet, according to Mariacher. Find out for yourself come spring 2014.