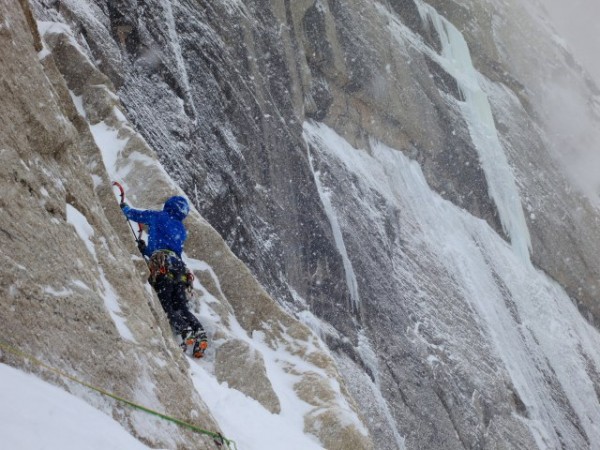 A few years back I wrote a review of Lowa’s Weisshorn boot and over the past few seasons I’ve tried a bunch of competitors…but I keep coming back to the Weisshorn.

Despite an “old-school” feel to the boot—it’s leather—it walks well, no integrated gaiter, handmade in Italy, it climbs vertical ice and rock capably and features new-school technology to do the impossible—it walks better than most boots half its weight, but still climbs waterfall ice as well as anything I’ve ever tried.

I love the Weisshorn.

Lowa offers another boot, the Latok, which has an integrated gaiter similar to the SCARPA Phantom Tech or LaSportiva’s Batura 2.0. I’d love to try it, but honestly, the Weisshorn is warm enough I’m afraid I’d find anything burlier overkill for Colorado, the Cascades, and summer in the Alps. The Latok also features much more synthetic upper material, as well as a zippered closure, all of which are less durable than a traditionally constructed leather boot like the Weisshorn.

Seems like the general public is defaulting to gaiter-boots these days, but I’ve tried to politely suggest to a few guests that just because it’s the new thing doesn’t mean it’s the right call. In the lower 48, for most days (Wyoming and Montana included!), a non-gaiter boot is usually enough. They’re more versatile, more durable, and less expensive, too.

The Weisshorn paired with a Cassin Blade Runner crampon–great performance.

I’ve climbed steep, thin ice in the Weisshorn, glacier-slogged in the Cascades and Alps, and short-roped fourth-class rock in them. Always great, no matter what.

Weight-wise the Weisshorn (980g) falls somewhere between the Nepal Evo (1012g) and the Nepal Cube (895g), which makes sense, given the Weisshorns are almost entirely leather and feature a real rubber rand, rather than the lighter, but less sticky, stuff on the Cube.

Lowa achieves a fantastic balance between walking comfort and vertical performance, thanks to the carbon inlay hiding within the gray polyurethane (PU) portion of the sole. (Good choice on the PU, as it’s way more durable than EVA.) Carbon has nearly limitless capability to be precisely built to deliver whatever performance characteristics a designer might want. In this case it’s just enough flex to make the Weisshorn feel comfortable on the approach, but enough torsional rigidity to feel stable and predictable while climbing. Perfect.

Most manufacturers tout the fit and flex of their boots and the good ones, like Lowa, SCARPA, and LaSportiva, mostly deliver on their promises. Lowa’s ankle, though, is just a cut above anything else I’ve worn—I get better ankle flexion in the Weisshorn than I do my Trango Cubes or red Trangos, both boots that weigh hundreds of grams less, but somehow don’t deliver equal mobility.

Lowa calls it FlexFit Syncro and like the carbon inlay, the ankle somehow gives fantastic support (it’s three eyelets high), but allows the wearer exceptional flex to the rear. You can also leave yourself a bit of

wiggle room to facilitate flat-foot French technique while wearing crampons. Like most alpine boots, the Weisshorn has locking lacing studs to control the lower boot’s fit, which leaves the upper laces free to be tightened/loosened depending on your preference at the moment.

Lowa has finally made a women’s version of the Weisshorn! Definitely check ‘em out if you’re looking. I find the fit roomier than some of their lighter boots, like the now-discontinued Vertical GTX.

If the Weisshorn seems like overkill for what you’re doing, there’s also the Mountain Expert (880g), which has a lower ankle collar, no carbon in the sole, and PrimaLoft insulation in place of the Weisshorn’s Duratherm. Might be a cool summer boot? I’ve not tried it, but I’d be psyched to.

The bottom line in boots is fit and the Weisshorn fits my low-volume, high-arch foot really well. I run a custom footbed in it, which helps, too. They’re not nearly as widely available as a SCARPA or LaSportiva boot, but the quality is on par with those brands, so if a local retailer has them, give them a look.

I imagine Lowa will update the Weisshorn in the coming years. The boot hasn’t had a major change in the past several years, so it’s about time. Hopefully they’ll leave the good and perhaps visit the weight a bit. That’d be about the only thing I’d change with it. Other than that, A-plus!