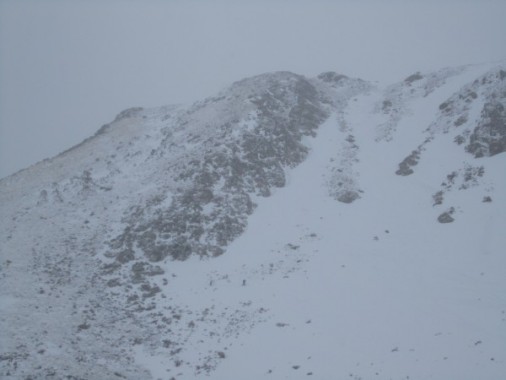 Two snowshoers can be seen just starting into the slide path(s), with another two trailing in the rocks behind.

With a relatively late start to the winter, it’s been quieter than usual for avalanche incidents…but our hiatus is sadly over. Two in-bounds fatalities in California this week, a couple spooky articles/videos making the rounds on the Web, and a few close calls in Colorado have me feeling like the madness has begun. Maybe the early season was as busy as usual, but whatever the case…it’s “game on,” friends.

A patroller at Alpine Meadows was caught and killed while doing control work and a snowboarder was fatally buried at Donner. Near Leadville, two skiers triggered a slide and luckily one remained on top–he deployed a balloon pack–and was able to rescue his buddy. Many of you may have read/viewed an interesting, moving piece in the New York Times, called “Snow Fall,” a recreation of the events at Tunnel Creek, outside Stevens Pass resort. Just days after “Snow Fall” made the rounds on social media, another video appeared, this one called “Crystal Mtn. I-5 Northway” on YouTube. It’s an in-bounds event at Crystal, one in which a lone skier is caught, buried, and eventually rescued–but not before total chaos ensues during the rescue. (I’ve yet to read the official report from this incident, so that’s my best understanding of the case so far–if anybody has the link to the case study, please share.)

It’s online bloodsport doing the Monday-morning QB routine with avalanche incidents. I’ve posted my own experiences here and they provoked the usual “dude-you’re-gonna-die-and-you’re-a-total-gumby” responses, in addition to an interesting discussion from which I learned plenty. The videos above (and the incident involving the skiers and airbag) have already inspired a bunch of second guessing from the peanut gallery, but it’s a seductive exercise, criticizing people in the field, with the benefit of 20/20 vision. Let’s give folks the benefit of the doubt, especially until we read accident reports, hopefully prepared by knowledgeable investigators. The Times article and Crystal video portray a bunch of interesting material, so they’re definitely worth a look and discussion within your backcountry team.

I guided on Berthoud on Chrimstas Eve. Marginal skiing at best and as usual I witnessed what I thought were alarming travel techniques. Being on Berthoud constantly amazes me…I see tracks on stuff that I consider totally off limits, but somehow 99-percent of the time people get away with it. Maybe I’m just too conservative? Anyway, I watched a group of four snowshoers traverse the “Current Creek Bench” slide path, then regroup in the middle, turn downhill, and descend towards the aqueduct. The bulletin called “moderate” danger at that elevation/aspect, but remarked on people triggering slopes from long distances. It seemed like a pretty aggressive route, but maybe they were more familiar with the snowpack or more confident with the call than I would’ve been.

Avy science and safety is endlessly interesting to me, so I’m psyched to be reading more and learning new stuff for the coming year. Colorado’s Front Range gets hammered with traffic, so there’s always something to discuss, debate, and study. Keep your eyes peeled and if you haven’t done your AIARE 1 yet, find one with a reputable provider and jump in! We have some of the best avalanche educators in the country located right here, so there’s no reason not to get informed.

Condolences to those affected by the fatalities in California. Here’s a good moment to pause and recommit ourselves to not becoming a case study this winter. Watch out for each other, build a good backcountry team, and play safe, amigos. Like I tell my nephew, “The mountains will always be there; the trick is making sure you are, too.” Words to live by!

p.s.–I’ve seen that quote attributed to Hervey Voge. Anybody know differently? Write in and do tell!