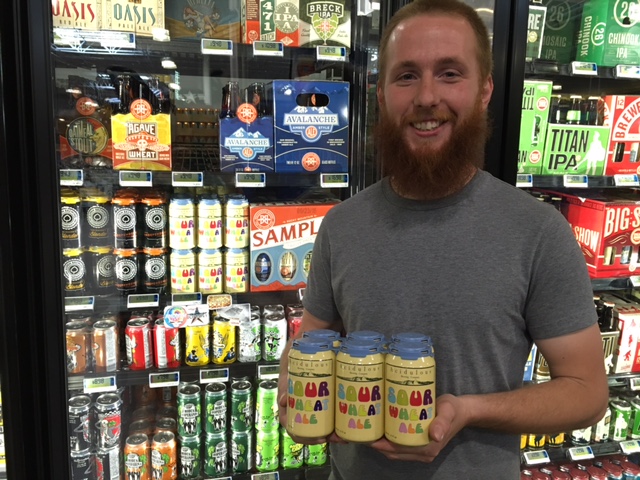 If you go looking for Acidulous Brewing Company’s tap room you won’t find it. Nor will you see their delivery truck driving around town. Hell, you would have to look hard to find their inaugural release ‘Sour Wheat Ale’ in most liquor stores, and that is just what owner and head brewer Nick Garrick wants, for now.

Sounds like a crazy business plan, doesn’t it? But, here is the rub. Their unconventional launch might be the way of the future in the craft brewing industry. Let me explain.

Three years ago Garrick started homebrewing sour beers in the living room of his apartment in Boulder. Fast forward a few years and he found himself wanting to share his creations with a wider audience. The dream of owning his very own brewery seemed forever out of touch. Start up costs for even a small brewery run in the several hundreds of thousands of dollars. That’s a lot of money for anyone, much less a twenty-five year old. That’s when someone suggested contract brewing with an existing microbrewery that had extra space.

For decades the words ‘contract brewing’ have brought frowns to the faces of craft beer aficionados, for good reason. Back in the early days of the craft beer movement there were numerous faux brands that were little more than poor beer disguised as craft beer. Often they were flaccid attempts by bigger mainstream brewers to test out new items. But, that was before the country embraced craft beer. At last glance there were over 4,000 breweries in the United States. The American drinker knows   their beer, and has high standards; crappy beer just does not fly any more. The explosion of breweries has also led to many brewers having unused brewing space. By allowing an aspiring brewer the chance to use their high-end equipment to chase their dreams not only makes the brewery extra money, it also allows them to share their knowledge while paying it forward.

A quick email to Crazy Mountain Brewing in Edwards confirmed that they did indeed have extra space, but there was a caveat. Any product created onsite had to meet their high standards. “In my first meeting with them they told me they are constantly turning people away, they only work with people serious about their beer,” says Garrick. After sampling several of his homebrews, and talking about his plans they agreed to let him use their facility.

While he slogged through the necessary paperwork to satisfy both the Federal and State governments, he joined the Brewers Association. He was officially a brewery.

Next up he contacted Mobile Canning Colorado who helped him design his packaging and made an initial run of 5,000 cans for his Sour Wheat Ale.

Finally in early April of this year he arrived at the Crazy Mountain facility. They had all of the ingredients ready and their brewers worked side by side with him as he started his first batch. Two weeks later he had 30 kegs and 144 cases of beer ready to sell, Acidulous Brewing Company was in business.

Within one and a half weeks Garrick had sold all of his cases of beer, and half the kegs. Working mornings before he went onto his full time job each night, he would visit liquor stores and bars scrambling to sell his beer. Delivery was done out of the back of his car. His Sour Wheat Ale was a hit. Fruity with a pleasant sour touch it was the perfect beer for spring. While peddling his beer he already had plans for his next release. In early June their Flanders Red will roll out followed quickly by a fruit version of his Sour Wheat.

Profits are minimal right now, as most startups are in the beginning, but there are bigger things on the horizon. “The plan all along was to use this as a starting point to attract an investor,” says Garrick. “I needed to show that my beer would sell.” It worked. He is currently scouting locations for a small brewery and tap room. From there, who knows what’s next.