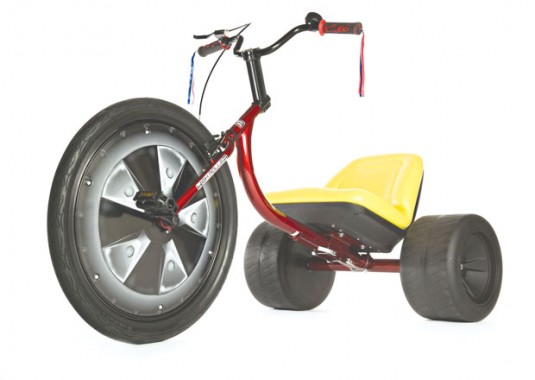 While pursuing an aerospace engineering degree at CU in the late 1980’s, Matt Armbruster couldn’t have imagined a career crafting big wheels, let alone Big Wheels for adults. But after 16 years designing spacecraft, the Lafayette resident decided it was time to have a little fun. In 2010, he created the first High Roller prototypes—five steel-frame adult-sized big wheels—and debuted them at the Interbike tradeshow in Vegas. He was overwhelmed by the enthusiastic response.

“Everyone has these incredibly vivid memories of how much fun they had on their Big Wheels as kids,” Armbruster says. “It may not be something they’ve thought of for a while, but as soon as they saw mine, the memories just start gushing out.”

Armbruster, 44, returned home to Colorado and began refining his design. Last year, he launched a Kickstarter campaign to fund production for 300 High Rollers, raising more than $89,000, and committed himself full-time to his new company, High Roller USA. “I’ve got both ends of the spectrum covered, “ says Armbruster. “I’ve designed stuff on Mars and I make toys.”

Deciding to devote his life to Big Wheels isn’t as big a stretch for Armbruster as his former aerospace career would suggest. He says he was an avid Big Wheeler as a child, and went through at least three growing up. Twenty years ago, he founded the Big Wheel Rally (BigWheelRally.com) in Boulder, a zany bar crawl on Pearl Street done on kids’ Big Wheels. It was then that he first discovered that there were no adult-sized models available for purchase, anywhere. As the event grew, more participants, including Armbruster, started retrofitting their low-riding trikes to be more grown-up compatible. “They were frankentrikes,” Armbruster jokes. “I kept looking around for experts, someone else who was already doing it, but found no one. I realized it was going to have to be me.” Armbruster’s High Roller design fuses cycling technology with time-honored big wheel favorites like handlebar tassels and an “I my bike” bell. The front end is modeled after a mountain bike with a steel frame and fork, an alloy V-brake and levers, a 26-inch rubber front tire and a custom free wheel hub (which lets riders coast instead of “egg beatering” like children’s Big Wheels). On the backend, he added a cushy seat, but chose to stick with traditional plastic wheels instead of rubber. Rubber would have enabled riders heavier than 275 pounds, but negated the ability to do “power slides,” an aspect of Big Wheeling that Armbruster wasn’t willing to sacrifice, even now that he’s an adult.

The High Rollers weigh about 45 pounds and cost $600 (plus $99 for shipping). The first batch shipped from a Longmont warehouse in November. While Armbruster pre-sold more than 200 big wheels during his Kickstarter campaign, he produced 300, meaning that at press time, there were still some available for purchase. highrollerusa.com