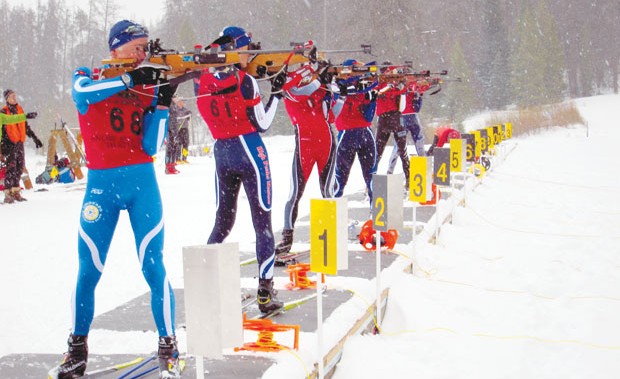 Mention the sport of biathlon to most people, and you’ll be rewarded with a blank stare. No U.S. athlete has ever won an Olympic medal in biathlon (cross country skiing and rifle shooting), since it debuted in Squaw Valley in 1960. And at the World Championships held every two years since 1958, we have scored a total of two biathlon medals (less than Slovakia but more than Romania!) in the countless individual and team race formats and distances for men and women. The medal count for the Soviet Union/Russia, Norway and Germany far outpace every other nation.

Why? Those places are cold (so every man and woman skis from the day they’re born) and northern Europe has a well-established tradition of rifle hunting (and warfare), so people know how to shoot. And while many folks in the U.S. like to shoot, you don’t often find them on skis. And vice versa.

It’s worth noting that Americans have fared much better at the discipline of Nordic combined (cross country skiing and Nordic Jumping), but Billy Demong’s historic 2010 Olympic gold in Vancouver did not exactly light up sports talk radio across the nation. In fact, his win was the first U.S. Olympic gold ever in any Nordic discipline dating to 1924, which makes the three silvers won by his teammate Steamboat-local Johnny Spillane in Nordic Combined relay, big hill and normal hill all the more amazing. Could these sports be entering a new era? Um, no.

“The sport of biathlon is basically about shame,” jokes Walter Warwick, president of the Colorado Biathlon Club. “Typical for something invented by the Germans.”

Though he’s simply explaining how penalty laps work for missing targets on the November day we meet at Snow Mountain Ranch, the sport’s technical and physical difficulties do (and will always) keep people away.

“At this level, the races are won and lost on the penalty laps, not how fast you ski,” he adds

I can deal with that. Growing up in Sweden I simultaneously learned to ice skate, ski and walk, and I’ve been fascinated by this obscure Nordic sport since seeing races on grainy TV sets as a child. In 2005, I competed in Sweden’s signature sporting event, the 90-kilometer Vasaloppet, which commemorates a Swedish king’s escape—on skis—from invading, bloodthirsty Danish troops in 1520. And I’ve published an outdoor magazine from a defunct ski jumping tower on the outskirts of Stockholm, so competing in Nordic combined is definitely on the bucket list.

These are not, however, easily accessible sports in the U.S. and that’s what makes Snow Mountain Ranch in Granby, Colorado, near Fraser and Winter Park all the more special. This 5,000-acre YMCA facility has 80-kilometers of Nordic trails and boasts Colorado’s only biathlon course, complete with a 14-target shooting range.

This winter, I’ll be competing here in my first biathlon race, and to prepare I recently attended a “dry-shooting” clinic with former U.S. Olympian Haley Johnson, 30, and skied and shot at Snow Mountain Ranch. Feeling the Primal Urge: What other sport can claim the cardio pump of nordic and the camo cool of shooting? Photo: Courtesy YMCA of the Rockies

Polka music blasted from the outdoor speakers at the Nordic center when I pulled up earlier in the day. A hand-carved wooden sign embellished with flowers hanging over the waxing room door reads: “Välkommen min vän” (Swedish for “Welcome my friend”). These touches warmed my heart and are typical in the Alps and Scandinavia, but in the Rockies they’re just dorky. Just like how the American football teams that would practice on soccer fields near my apartment in Stockholm looked ridiculous and totally sucked and never had any cute girls watching, Nordic skiing in the U.S.A. always feels out of place.

A mid-November storm had dumped a foot of snow the night before, and I got to experience the weird sensation of skiing powder up hill as Warwick and I skate skied to the shooting range. Haley Johnson’s excellent instruction (sighting, body position, breathing, etc.) from a few weeks earlier had prepared me well, and I hit my first five targets at 50 meters lying prone. I was 60 percent effective standing up, but once we started doing hot laps and shooting winded, my aim suffered dramatically.

“Shooting requires a quiet state of mind not usually associated with strenuous physical competition,” Johnson had told our group of seven fit 40-something professionals at Devil’s Thumb Ranch near Fraser, where I first met Warwick.

This had registered intellectually at the time, but she’d also praised World Cup competitors for how quickly they run through their “process,” when preparing to shoot and exiting the range. “It’s like watching in fast motion,” she’d said, glowing.

I was lost. “Putting on a backpack fast is impressive?” I thought to myself. Now I got it. Biathlon guns—some of which cost $3,000–$5,000 and look like svelte, bored-out kitchen utensils/sling shots—are carried on the back when skiing and the elastic shoulder straps are permanently affixed to the rifle stock. Taking one of these .22 caliber rifles on and off requires yoga-like contortionism, and sighting the target when you’re breathing hard is like balancing on a floating cushion in your cousin’s pool.

“Consistency in site alignment is more important than being on the bull,” says Warwick. I clearly needed more “dry-fire” training to establish my handholds, body position and breath control routines to line everything up. This would engrain the necessary muscle memory to calm me down and mitigate distractions like wind, other racers and stress from skiing. But miss one shot, and I find myself rushing to compensate. Bad.

Still, I was hooked. I’ve always loved the speed of skate skiing, but add to that rush the awesome power of shooting a rifle and hearing the satisfying clank when I’d knock down a target, and I wanted more. Philip, the modern 10th Mountain Division weekend warrior!

Warwick and I are out on the course for two hours with temps in the low 20s and eventually ski out in darkness. Tight-fitting, sporty, stretch apparel works fine when you’re moving, but lying on the snow, my fingers and toes quickly freeze. Haley’s instructions ring in my brain: “Use the structure of your body. Less muscles, more bone.” It’s clear that the more I smooth out my “process,” the more stable the shooting positions and the more efficient my shots. I need to take her advice and practice in slow motion—biathlon Tai Chi.

Warwick’s out-of-breath shots are better than mine but not that much better. He takes a philosophical approach: “Get through a book on position shooting, and half way through it turns into a self help book. It’s like, ‘It’s ok, I can do this.’” He is exceedingly precise in his instruction and keen to point out ways to economize motion. Warwick has honed his system, and his motions are fast and unthinking—flip up barrel guard, flip up sight guard, hook shoulder strap, remove spent magazine, insert new magazine, cock the bolt, etc.

Endurance athletes tend to be technical and a bit nerdy, biathlon athletes more so because of the potentially deadly firepower. Warwick could discuss gear, diet and interval training ad nauseam, and Nordic skiers like him accept fanny packs, ear warmers and wraparound, yellow-tinted shooting glasses without question. I’m cool with that. I’m one of them. Wait, where are you going?

Philip Armour is the editor of American Cowboy magazine and former editor of Outside Sweden.