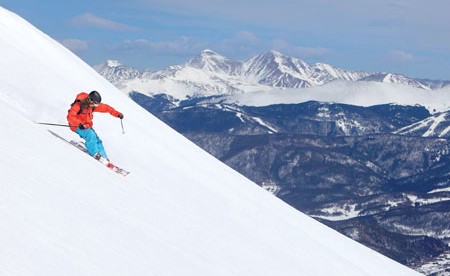 In July, Breckenridge Ski Resort began construction to add 543 acres of new terrain in the Peak 6 area. The addition is Breck’s first in 10 years, and the first terrain expansion on National Forest System land in Colorado since 2008. Along with the expansion, which will include 400 acres of lift-served terrain and 143 acres of hike-to terrain, the resort is adding a new high-speed, six-person chairlift and a new fixed-grip chairlift to access the area from Peak 7. The move will add three bowls and 10 trails, increasing the resort’s skiable acres by 23 percent.

Breckenridge is the most popular ski resort in the U.S., with 1.6 million visitors per year. Parent company Vail Resorts hopes the new terrain will not only increase the resort’s overall carrying capacity, but also improve the skier experience by offering above-treeline skiing for intermediates. “The new terrain will feature high-alpine, intermediate bowl skiing—a rare find among our eight world-class resorts and in North America,” says Rob Katz, chairman and CEO of Vail Resorts.

Not everyone’s psyched about the changes. Peak 6 is a popular spot for many locals, and sees significant use by people who prefer to earn their turns by skinning up before skiing down. Locals are bummed to lose what they consider a safe swatch of sidecountry. “It’s a loss, for sure,” says Boulder resident Don Elsborg, who has owned a condo in Breck since 2006. “But I guess it gives me reason to try skinning Peak 5.”

Breckenridge expects the Peak 6 lifts to be ready for the 2013-2014 season and will announce the official opening in early winter. Until then, all roads and trails within the area are closed to pedestrians, wheeled motor vehicles and all other forms of motorized and non-motorized travel. breckenridge.com