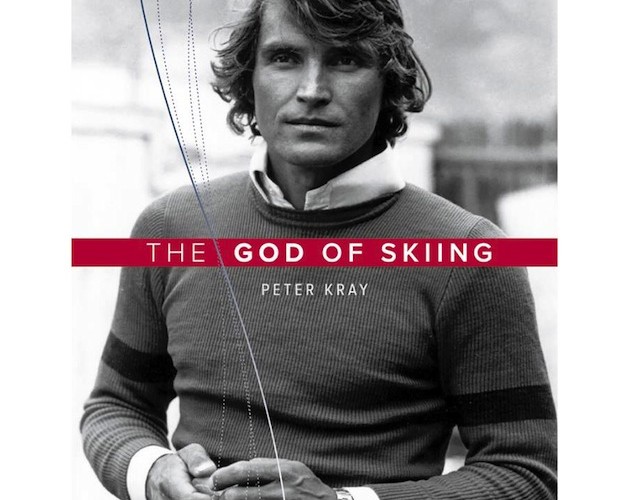 Elwayville: The God of Skiing Has Arrived

The Sports Illustrated story was called, “In Search of Strau: What’s become of the daredevil king of collegiate skiing?” In the photo Tack Strau was standing on stage at the NCAA Championships on the top podium, golden and glowing like a statue in the sun. Like a movie star with his broad Swiss face, his white crooked smile and his wheat white hair blowing in the wind.

He was the quarterback just come off the bench to win the game, except with something tattered and about to be broken. In the scar that cut from his right temple to his cheek. In the careless way he raised the silver trophy in his right hand. You wanted to be there to catch it for him. To show him how the other two skiers on the stage, the posters, banners and people in the crowd were all falling out of focus in a swirl of color behind him.

The story counted up the long list of come-from-behind victories and heartbreaking wrecks in two columns right beside each other until they began to seem like the same thing: the stunning wins where he careened down the course and everybody forgot to breathe, or the quiet after the crash before the blood hits the snow and the skis are still sliding. From triumph to tragedy, one after another, they read like the made up rumors of some distant, crazy cousin.

His fluid, aggressive style in the giant slalom was described as “angry,” “feral,” and even “pathologically transcendent.” He skied so close to the gates that they would explode. Sometimes it seemed he skied right through them.

He won races from way back in the field when the spectators were starting home and the courses were rutted and rotten. He ran from the top of the mountain all the way to the bottom on icy blue pavement like tilted frozen lakes through the trees where only because of their balls, their fear or their fuck-it-all that skiers first see if they can survive, then win. And Tack won by a whole second sometimes, which is an eternity in skiing. Or he crashed so spectacularly that a hush ran up the hill: Is he dead? Will he ski again?

They would rush back to the orange fencing when they heard his split-time come over the PA system. Those early East Coast drunks, leaving their beers on the bar as they ran outside for that glimpse of a shooting star—the vapor trail of snow as he was passing. Shouts erupted from the finish line as the adrenaline went through someone. Or there was a collective gasp as he sailed into the woods like a car off the road and everybody waited for the explosion.

But he never missed a race. No matter how badly hurt he was, he was always back the next weekend. He hid his broken wrist with bigger gloves. He took off an eye patch on the lift and stayed off the drugs to pass the piss test. Between his ribs, his arms, his legs and hands he broke 17 bones.

He drank after races with his growing legion of fans, the “Scarecrows,” who took to making phony casts, wrapping themselves like mummies in toilet paper and blacking their teeth with markers and charcoal to cheer him. At the NCAA championships in Lake Placid, he annihilated the field in giant slalom. Then, almost as a joke, he entered and won the slalom. In the post-race interviews he revealed to a reporter he had torn the MCL in his right knee during a training run. He said the doctor told him he needed surgery and at least four months off before he could ski again.

“It’s like being pocket rich,” he said. “You spend it when you can.”
And then, that immortal quote: “If it weren’t for gravity, I’d probably be in Nebraska building engines.”

—This is an excerpt from Peter Kray’s The God of Skiing. More than 10 years in the making,  the book has been called “The greatest ski novel ever written.” It will published in early December by Shred White & Blue Media. For orders, check out TheGodofSkiing.com.