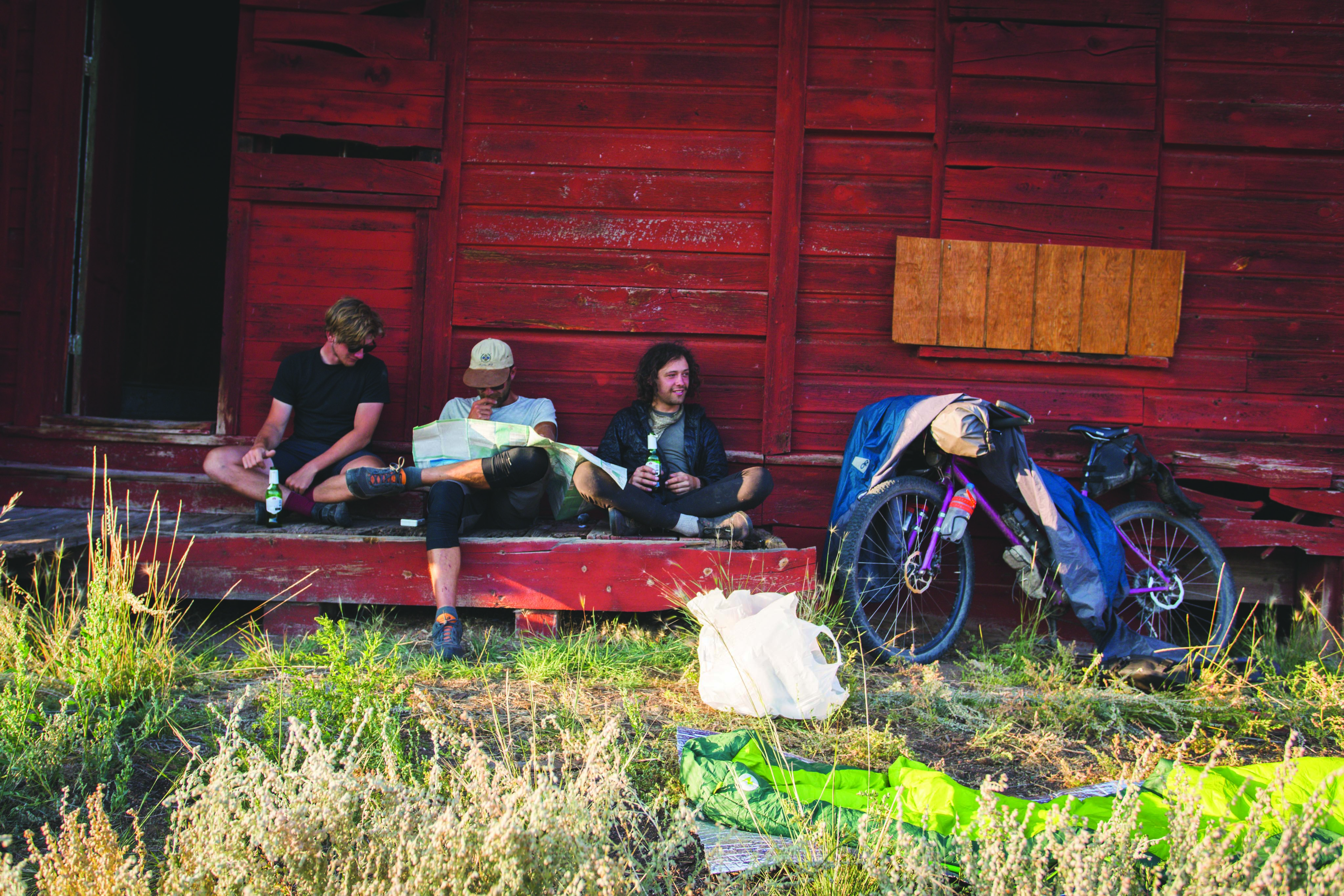 Spend 40 days riding 2,800 miles of dirt and gut-wrenching hill climbs with friends new and old, and you may want to keep riding forever.

It’s a late September morning in Hachita, New Mexico. I’m sitting in front of Hachita Food Mart, the only business in this border town of 49, a one-pump gas station that’s part convenience store and part second-hand clothing shop. Jeff, the proprietor, has a pot of coffee on. It’s free to Great Divide Mountain Bike Route riders like us, but, honestly, just about anyone who happens to pass through this forgotten desert town could have some.

I take a sip from a Styrofoam cup—it’s my first coffee in weeks—and  settle in to a cracked red pleather chair. The blister-white sun is already high in the sky, again. On any other day, I would have been on the bike for two hours by now, too anxious about the mileage I had to put down to putz around during the coolest part of the morning. But not today. It’s the last day of a nearly 3,000-mile journey that began more than a month ago in Canada, and I’m not ready for it to end.

The Great Divide Mountain Bike Route is the longest off-pavement bike tour on the planet according to the Adventure Cycling Association. Consisting of primarily dirt and gravel roads with some single- and double-track mixed in (and just a bit of pavement to connect the route in spots), it follows the backbone of the Rockies for 2,800 miles from Banff, Alberta, to the Mexican border. It’s remote and grueling, running up and down over 200,000 feet of elevation gain (that’s more than 71 feet up for every mile you pedal forward). And there are grizzly bears—but, believe me, they are not as scary as the hills.

It is precisely because the ride is so hard that I wanted to take it on. After years of watching friends finish thru hikes, I was determined to do a self-supported adventure of my own. About a year ago, I settled on tackling the Great Divide along with my boyfriend Adam, even if I swore I would sleep every night with bear spray strapped to my chest. That I could end up left for dead like Hugh Glass was my biggest fear, overshadowing any doubts I’d had about my ability to finish the route.

I rarely questioned my determination. Amateur cyclists had been setting off on the Divide with trailers and 80-pound rigs since the gravel tour’s inception in 1998. I had no trailer and half the weight. Surely, I could put my head down and grind, if only the bears would leave me be. Now, six weeks in and just a day’s ride from the end, it seems laughable that it was the grind, not the bears, that nearly took me down.

The other Jeff in this dusty town, Jeff Sharpe, is sitting across from me. He’s wearing a perfectly crisp white-collared shirt tucked into a pair of plaid cargo shorts. A Bluetooth headset perches on his ear. Why he needs a device like that, out here in the vast Chihuahuan Desert, I can only imagine.

“Do yourself a favor,” he stops and says to me. “Don’t ride too close to the white line. That’s where the rattlesnakes like to hang.”

I’ve been emailing with Sharpe for weeks. He’ll be giving Adam and me a lift from the Mexican border to the Greyhound station in Lordsburg to finish up our more than month-long tour. As we hunker in the fading shade with our coffee, Sharpe spouts off tips not just on snakes but also border patrol and how to score an ice cream sandwich at customs.

Eventually, we mount our bikes and point our handlebars south for the last time. On our way out of town, we pass a hand painted sign hanging in a tree. It reads, “Hachita NM Rest Area.” There’s a toilet below it, propped up on a couple of cinderblocks, and for whatever reason, the sight of that rusty little bowl makes me sad.

Stormy clouds brew in the sky above and a stiff headwind kicks up dust devils on the horizon. To the east, the craggy Big Hatchet Mountains from which Hachita gets its name dwarf the sagebrush-studded plains. To the west rise the Animas Mountains, and ahead, directly due south, is New Mexico State Road 81, fast, straight and insufferably flat.

Adam and I ride alongside Val and Arlo, two Bostonians who’ve pedaled with us since day five, the first time we crossed a border from Canada into Montana. We ride hard into the wind, four abreast across both lanes, merging single file occasionally to let border patrol zoom by us.

The mile markers pass with cruel indolence. One mile feels more like three. We make a little bit of small talk, but it’s forced. The four of us have ridden so far together, seen so much. Weather-beaten and weary, the skin on our asses now hardened like leather, we should feel relieved knowing that it’s all coming to a close. But we don’t. What more is there to say?

I put in my earbuds, seeking comfort or distraction or both, but it’s impossible to hear much of anything above the roaring wind. I rip them out. A tidal wave of emotions wash over me: a mix of anxiety and foreboding, frustration and boredom. I stand out of the saddle to give my seat bones a rest, but with no undulations in the landscape, I can’t stop pedaling for long. Banking into one of only a few turns on this interminably straight stretch of pavement, I realize, begrudgingly, the source of my frustration—I miss climbing mountains.

Of course, three and a half weeks and 1,700 miles earlier, I was begging for the flattest, straightest pavement. Funny how that works.

It was the day after the total eclipse. We were camped at the base of Togwotee Pass not far from Moran Junction, Wyoming. The morning dawned clear and bitter cold. Everyone was slow to get going. Someone stoked the embers from the previous night’s fire, and we crowded around the welcomed flames to eat our breakfast. I knew the day called for a heavy dose of climbing—the first four miles ascended over 1,500 feet with a nine-mile climb up 9,120-foot Union Pass not long after that—so I left camp before our companion Ross had even packed the tent.

When you spend this much time riding with people, they become like your family. You get to know their quirks. You bond. An English-born Sydney transplant, Ross was a new addition to our motley crew of five. We’d picked him up just the day before. Then there was Greg from Sheffield, England, who, like Val and Arlo, had been with Adam and me since day five. We called him Detour Greg for his uncanny ability to take wrong turns and make unnecessary crossings of the Continental Divide. Val was our hopeless romantic. His pal Arlo was a bike mechanic in Boston. He didn’t carry a tent or a stove, often ran out of food, and whenever he got drunk he would read aloud the ingredients in his frozen burritos, but he never complained and, damn, was he fast at climbing.

They all were. Which is why I set out early to crawl up the first pass at my immeasurably slow leisure. We climbed for hours and hours. An endless procession of recreational vehicles and RVs dusted us on our ascent up Union Pass. The gravel was soft and deep and killed what little momentum we could muster. Even when the dirt was hard packed, the road was rutted out with washboards.

I bonked, ate a PayDay, recovered, and then bonked again. It seemed no amount of gummy bears could save me. It was roasting hot and late in the day by the time we crossed the Green River—I seriously considered jumping off of the bridge into the swift-moving current below, never to be seen on a bike again. We’d ridden over 60 miles already, and if we were to make it to Pinedale that night, we still had 30 more to go.

I forced down a generic brand sweet-and-salty granola bar and started riding again as the road deteriorated even more. A brutal headwind blew in from the east and every rock and rut rattled my brain. I’m not a religious person but I prayed for smooth pavement. When that pavement finally did come, with only 23 miles left to Pinedale, I was spent.

The boys pressed on to town, but I couldn’t keep up. Adam hung with me while I shoved fistfuls of trail mix in my face, shouting incoherent profanities between shattered sobs. A woman who lived nearby saw us on the road and stopped. She regularly hosted cyclists, she said, and had plenty of yard if we needed to camp.

“Will you be heading on to Pinedale then?” she asked, completely unaware of my meltdown. And there it was, the question I was too afraid to ask but knew I had to answer: Are you going to quit or are you going to push on and, in the words of Jack Kerouac, climb that goddamn mountain?

Never have my mind and body been so at odds. While that meaty matter between my ears swelled with pride for pushing through the worst of it (for today at least), my withering limbs begged to stop.

Just a few hours later, we arrived in Pinedale. No matter how badly I had wanted to quit back there, I knew that living without trying would have felt worse. We found a seat at a cozy hole-in-the-wall Mexican restaurant and I looked down at my shirt, crusted in sweat, nearly every part of my body aching from those excruciating 93 miles. But after two margaritas and a plate of huevos rancheros, I knew I was exactly where I was supposed to be.

Now it’s all too suddenly over. When we pull up to the U.S. Customs and Border Protection sign, Jeff Sharpe is already there with his silver station wagon and makeshift bike trailer. No one is in the mood for an ice cream sandwich. The stormy skies begin to spit rain. We take some group photos, unsure of whether we should be celebrating or mourning.

The shuttle ride back to Hachita takes 45 minutes, which seems laughable compared to the nearly four hours it had taken us to ride the same distance. I watch the Big Hatchet Mountain range from the passenger side window, feeling more at ease, though not entirely satisfied. It’s no exaggeration to say that many days on the Great Divide felt like punishing reenactments of that slog into Pinedale. With every obstacle, every mountain climbed, there was always another one ahead.

And yet, some part of me liked that, the challenge, the effort, the hard-earned miles and the camaraderie that evolved. So when we finally said goodbye to Val and Arlo and boarded an eastbound plane out of Phoenix, that feeling of dread settled into a calm resolve, for though I had climbed many mountains between Canada and Mexico, I knew there would always be one more around the bend.

—Jess Daddio is the travel editor at  Blue Ridge Outdoors and formerly managed the Live Outside and Play Road Tour.