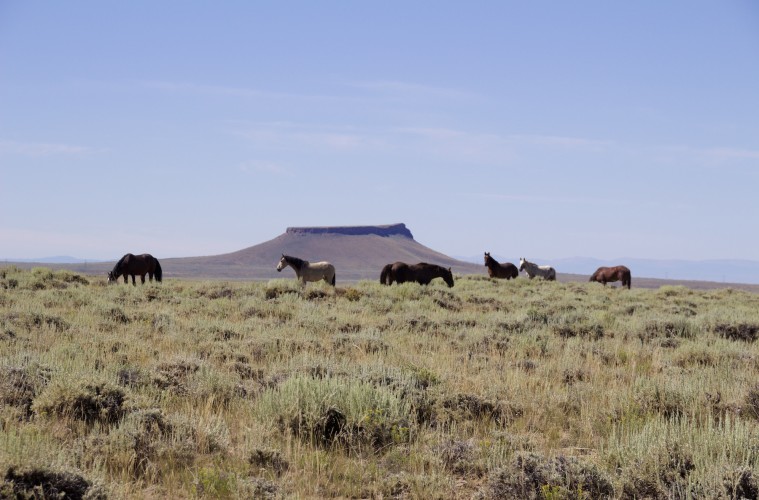 The jarring sounds of rocks striking the undercarriage and the cool mountain air moving through the windowless truck served as a better wake-up call than a steaming hot cup of coffee, as the old army vehicle we were traveling in careened deeper and deeper into the rugged Wyoming wilderness. It was 8 o’clock in the morning and Rich Nobles, owner of Green River Wild Horse Tours and our driver and guide for the day was busy shouting out all of the different types of creatures that called White Mountain home. There’s the pigmy rattlesnake, and the ancestor-less pronghorn, and white tail deer, and mule deer, and coyotes, and badgers, and porcupines, and mountain lions. But as the sun settled into the vast blue sky above Sweetwater County on this crisp summer morning, it wasn’t Wyoming’s typical wildlife we were in search of. We were on a mission to catch a glimpse of Green River’s famed wild horses.

Traveling west, is like traveling back in time when freedom was something that was much bigger than a three-day weekend or leaving the office an hour early on a weeknight. White Mountain encompasses every bit of the west’s wild independence and free nature. Even the grains of sand at the Killpecker Sand Dunes only answer to the wind, rambling along the mountainside with each gust, forming a brand new landscape as it blows along. In this land, the sun is king, and the sky bends down to touch every sandstone and shale rendered rock formation that gently rise from the earth below. It wasn’t until that day, as my fingers dug into the side of the truck that raced faster and faster along the rocky dirt roads, that I truly grasped what it meant to roam free. Our truck and tour guide maneuvered us through a spider web of dusty mountain trails for close to an hour, veering from the main county roads that make up the self-guided wild horses scenic loop tour, to the lesser-known areas off the beaten path, before we spotted the messy manes of one of the herds of wild horses that call the mountain home. As we crept closer, we could see the scar markings on their bodies, and bite marks in their ears. Protected by the Federal government, the 250-some head of horses that roam White Mountain don’t answer to anyone. They wander the land, politely lining up single-file to drink at the watering holes, and answering any and all disputes within the herd, or with members of other herds, the only way most feral animals know how. But as the horses stood defiantly before us, with the wind rustling their tangled manes, and Pilot Butte Rock framing the background, it was clear that they understood what it meant to be free.

The guided tour lasted approximately 6-hours and included visits to the Killpecker Sand Dunes, the White Mountain Petroglyphs, Boars Tusk Rock (an ancient volcano plug), and amazing up-close views of Wyoming’s wild horses. A long-time local, Nobles not only offered up a rare look into the area’s history, but also provided great insight to the best hiking and biking trails on the mountain along with the best camping locations, and important safety information pertaining to the land. Roughly a six-hour driver from Denver, the Green River Wild Horse tour is something I would highly recommend, especially before you head out into the welcoming world of White Mountain on your own.

If you go: Late spring through early fall are the best times to go. While many tourists crowd nearby Jackson, WY and Yellowstone National Park in the summer, the area around Green River in Sweetwater County remains free of crowds, making exploring the area by bike or by foot a pretty wonderful experience.