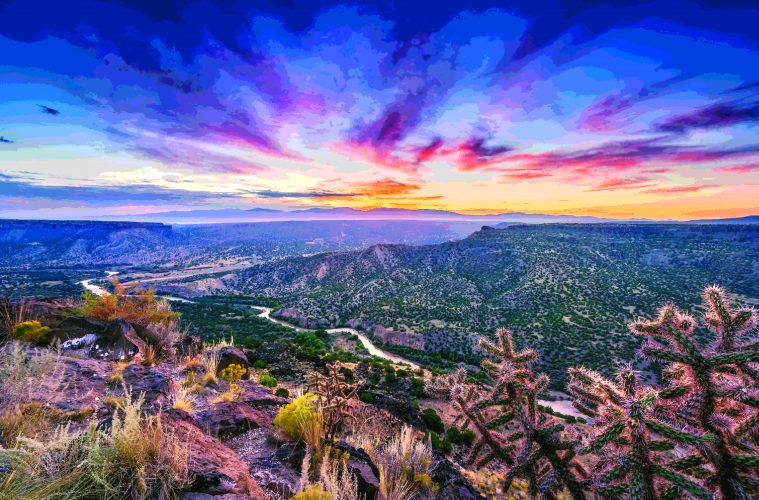 Cross the state line into New Mexico and start to study the landscape— the colors will draw you in, as they have artists and dreamers throughout history. Everything here is in a constant state of change. In The Land of Enchantment, no two days are the exactly same and there’s always a new adventure to keep you busy. Here you will find everything from big mountains and forests to large, open valleys to arid deserts to white gypsum dunes to a small trout brook trickling through farmland. The sun shines more days than not, and always remember: The red and green chile goes with everything. In the West, the most interesting places and people usually reside near the Continental Divide. It’s no surprise, that it was here, at the southern end of that great spine, where the concept of wilderness was born. Swaddled in mountains, with the Continental Divide Trail (CDT) trail cutting through the heart of downtown lies Silver City, New Mexico, the center of this wild landscape.

Southeast of town, New Mexico’s “City of Rocks” serves up great camping and mind-bending formations that look like volcanic marbles scattered across the Chihuahuan desert. North of town, the Gila National Forest complex engulfs the landscape. Within the forest boundaries you’ll find roughly three million acres of wilderness, including the first federally designated wilderness area, the Gila, as well as the Aldo Leopold Wilderness, namesake of the great conservationist who worked here. Both have excellent fishing and hot springs that have yet to be mapped. On the opposite side of the forest is the Cosmic Campground (3.5 acres), that was designated a sanctuary by the International Dark Sky Association in 2016 because it’s more than 40 miles away from a major artificial light, making it perfect for stargazing.

This April 28-30, Silver City will host the CDT Trail Days kickoff event. Northbound through-hikers embarking on the 3,100-mile trek to Canada will revel in a city-wide celebration featuring presentations by hiking experts, booths, food vendors and gear specialists holding drawings for shoes, trekking poles and other gear. Starting April 19, the annual “Tour of the Gila,” a five-day endurance bicycle race, kicks off. On the final day, riders race out of downtown to the Gila Cliff Dwellings, and turn around and race back to Silver City for a beer and good company. High in the tail end of the Rocky Mountains—and nestled between New Mexico’s two tallest mountains—lies the village of Eagle Nest, elevation 8,238 and population 276. The wide-open valley holding the town feels far from the crowds and lonesome trails, walked mostly by elk, crisscross the surrounding mountains. From the ridges above the village, one can gaze out on the clear blue 2,000-acre Eagle Nest Lake that drains into Cimarron Canyon, the water flowing east to the Arkansas River.

You won’t find many people in this part of northern New Mexico. What you will find is forests, snowy peaks and empty highways, so take a long drive. One 83-mile loop, named the Enchanted Circle, connects the village of Eagle Nest to the towns of Taos, Angel Fire, Red River and Questa, all small population centers near streams full of trout, and millions of acres of surrounding National Forest that hold rugged trails. It’s the perfect road trip for solitude seekers.

Eagle Nest Lake and nearby Cimarron Canyon are part of the New Mexico state parks system, meaning they’re public land. The parks offer lakeshore campsites and waters filled with trout, salmon and perch. At the foot of the reservoir, where the water begins to spill into the canyon, a hiking trail follows the stream as it descends beneath a 300-foot-tall granite cliff, called “the Palisades Sill,” a photographer’s dream.

In the summer, Eagle Nest comes alive. Each July, the village hosts fishing derbies, a motorcycle rally, a big arts and craft festival and Eagle Fest, a weekend of music and wine and beer gardens. This year, don’t miss the 100-year celebration of the creation of Eagle Nest dam, with fireworks on the Fouth of July over the lake. New Mexico is a truly unique place with a wide variety of odd and wondrous landscapes. Don’t forget: It’s the fifth largest state by area in the U.S., just behind Montana. New Mexicans hold tight to their heritage, and they’ve designated 35 state parks throughout the Land of Enchantment. They span the entire state, from the flat southeastern corner, and the scuba-dive-able waters of the Bottomless Lakes State Park, to the high northeast mountains, where you’ll find magical spots like Sugarite Canyon State Park with its rugged hiking and some of the best trout fishing in the state. Hot tunes in the open plains.

Don’t miss the wide eastern plains of New Mexico and the town of Clovis. The hallowed town is west of Lubbock, Texas, and east of where Billy the Kid and Pat Garrett fought in the Lincoln County Wars. It’s also one of the most important spots in the history of American Rock and Roll music. The Norman Petty Recording Studio here is where Waylon Jennings, Buddy Knox and Roy Orbison recorded some of their biggest hits. Every year, the town celebrates its musical heritage with the Clovis Music Festival, which will take place September 9-10 this year and feature Clint Black.