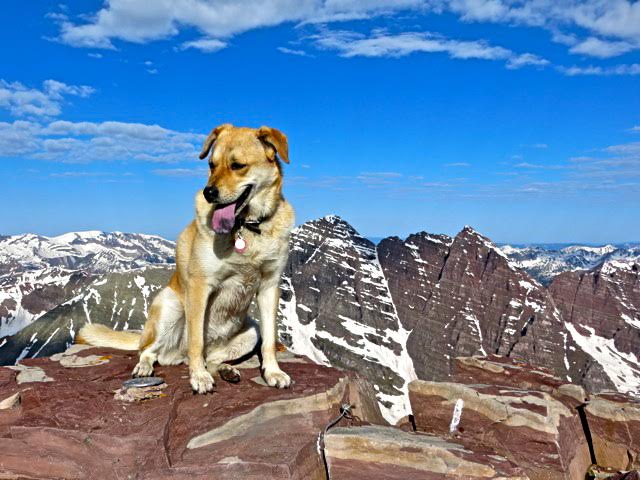 Any avid Colorado hiker understands the allure of peaking a “14er”. Defined as a summit of at least 14,000 feet with at least 300 feet of prominence, Colorado boasts an impressive 53 registered 14ers in the state. Ranging from mild hikes with evident trails, to multi-day, technical trips, the Rocky Mountains offer a diverse and exhilarating spectrum of accessible 14ers underneath our feet…or paws.

On any given 14er hike, you are bound to come across a four-legged furry friend scampering up the side of the mountain – generally at a much quicker pace than your own two legs. One pup in particular, however, has surpassed many human summits and has officially reached her 100th 14er summit on April 8, 2016. Meet Sophie – an adorable rescue coming from the rural areas of North Carolina, likely from a battered home. As any other Colorado transplant can tell you, “the mountains are calling and I must go” holds as the classic John Muir mantra, and Sophie is no exception. A lover of the outdoors, she and her human, Ryan Kushner, have been exploring the mountains for years, with Sophie’s first completed 14er in 2009. Originally from San Francisco, Ryan himself moved to Colorado after living in Minnesota for two years, wanting to try something new and get a better feel for the outdoors. Overweight and unemployed, Ryan began to hang out with Sophie, who was his roommate’s dog at the time. After extenuating circumstances forced his roommate to move out of Denver, and unable to care for Sophie, Ryan immediately agreed to take Sophie as his own. Ryan had vowed to shed some pounds and become a healthier individual overall. He hiked Mt. Beirdstadt in 2009, with Sophie ahead of him the whole time, to check off each of their first 14ers. “She must have climbed the mountain 10 times with all the running around she did. I could tell she was having the time of her life,” said Ryan. Sophie sitting next to the summit marker on Pyramid Peak

By the time hiking and climbing really clicked for Ryan, he was in much better shape and taking on more difficult routes to the summit. Tackling Kelso’s Ridge of Torrey Mountain, Ryan had Sophie right alongside. Considering it is a much more technical route, Ryan was slightly leery to bring Sophie, but in no time she was prancing ahead, scrambling over rocks most people have difficulty with and sporting a big smile on her face the whole time. As a pup that has been trained off leash with Ryan by chasing him around on his mountain bike for 2-3 miles just about everyday, it’s no wonder Sophie is in great shape!

Ryan describes one of his favorite moments with Sophie as a particular hike up Pyramid Peak. By mid-2013, Sophie and Ryan were a well oiled mountain machine. Ryan had just come back from a successful summit of Denali, and they were eager to get back on the mountain together. While dealing with some personal issues in the back of his mind, Ryan decided to get the clarity only the peak of a Colorado mountain can provide – and Sophie was his obvious choice in climbing partner. They trekked up Pyramid Peak, which boasts steep and rugged terrain, making it notoriously difficult for dogs to reach the summit. Ryan claimed he thought there were less than 5 dogs that had successfully completed the route, and was planning on having to tie up Sophie at the saddle before the last 1,000 feet of technical terrain. But before he could even consider this, Sophie was bounding up the mountain with ease. As Ryan was ascertaining his own route through some residual snow and rock, Sophie poked her head over the ledge with that big smile on her face, as if to say “Hurry up, Dad!” As they reached the summit, Ryan recalls being so proud of Sophie and having an immense weight lifted off his shoulders as he revels in this moment of the mountain and man’s best friend.

Ryan’s intent was to take Sophie to Crestone Needle during winter for her 100th summit. She had previously completed this 14er three times outside of winter, but accomplishing it now would have made her the only dog to climb this peak in the winter season. But with the weather forecast calling for an insurmountable -15 degree wind chill there that day, Sophie’s 100th summit came on a quick trip to Kelso’s Ridge, Ryan’s favorite route in Colorado, with the sun shining. She peaked number 101 immediately following Torreys Peak as they crossed the saddle to Grays Peak. As with any hiking venture, there is always the chance of adverse weather conditions on the mountain. While Sophie battles through most hikes without complaint, Ryan has found that anything below 0 degree wind chill or temperature with Sophie is unmanageable. To keep her paws warm on those chillier days, they use Musher’s Secret.

While Ryan has said he would be lying if he hadn’t thought about tackling all of Colorado’s 14er with Sophie, it is more a matter of making sure she can do the hike. As part of a National Park, Longs Peak does not allow dogs nor does the train needed to take to the four Chicago Basin 14ers. But for Sophie, it is more about getting outside and enjoying spending time with her human counterpart. Ryan is currently training for a trip to Pakistan this summer to tackle the 13th tallest peak in the world, Gasherbrum II, which stands at a mighty 26,232 feet. While Sophie won’t be along for the ride on this one, she plays an integral part of Ryan’s training by helping to push him on his favorite training peak, Mt. Morrison in the foothills of Colorado. By trying to keep up with Sophie, Ryan knows he is working incredibly hard to keep pace and to ready himself for the oxygen levels in the “death zone” on Gasherbrum II. As a pup that is going on nine years old, Sophie will continue to bask in her days of that Colorado mountain sunshine, and accompany Ryan on all the adventures she can. Ryan and Sophie sitting on the summit of Mt. Oxford

Special thanks to Ryan Kushner for sharing Sophie’s story.