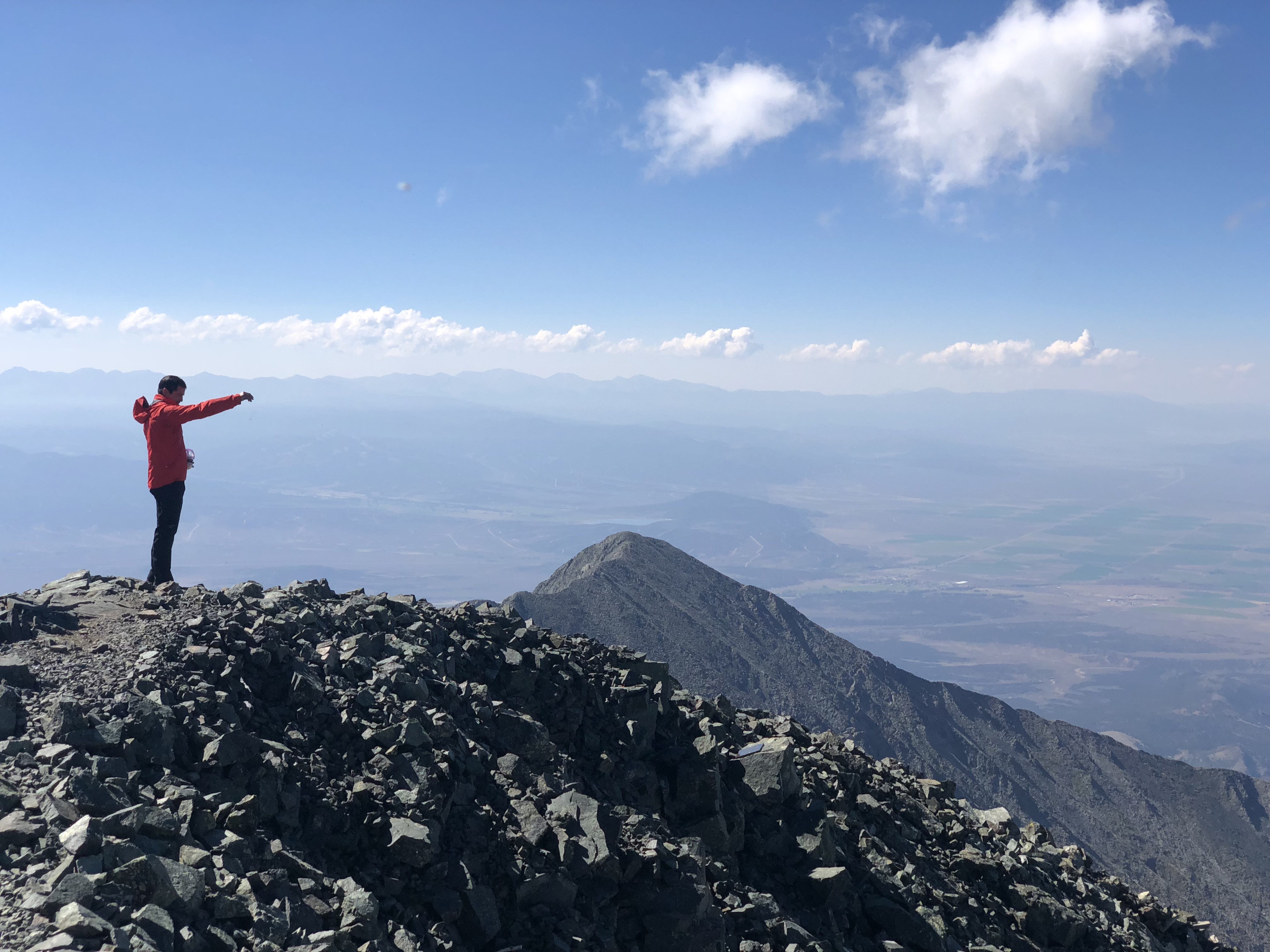 Back in 2016, five tribes and the outdoor industry united around one national monument. In 2018, Colorado state officials want to turn that historic coming together into a lasting alliance and long-term policy.

During the first morning of the summer Outdoor Retailer trade show in July, five climbers, ultra-runners, and outdoor sports advocates—all ambassadors for Natives Outdoors—circled a table at the Patagonia booth. The air buzzed with a vibe that had nothing to do with the newest gear. The energy stemmed from the previous day’s summit, which convened representatives of a dozen tribes from seven western states to talk about outdoor recreation.

“We’re natural allies, the outdoor industry and the tribes, and now we need to figure out how we navigate that relationship,” says Lydia Jennings, a Natives Outdoors ambassador and ultra runner. Natives Outdoors was founded by Len Necefer in 2017 to promote images of indigenous people at the crags, on the trails, aboard boats and with freshly caught fish in hands, and it has branched into efforts to restore tribal names to peaks and to make the outdoor industry an economic driver for tribes often located near public lands. Necefer worked with the Colorado Commission on Indian Affairs and Colorado Outdoor Recreation Industry Office to organize the event.

What this industry is and how to integrate it economically are a core qustion for the group, but so are increasing opportunities for outdoor recreation for tribal membersand securing tribes a spot in steering management of Colorado’s public lands. Summit attendees at the July meeting even had a chance to review an accord signed by representatives from eight states with outdoor recreation offices to align around shared principles, one of which calls for engaging tribal governments.

With a shared interest in causes like preserving Bears Ears as a national monument having sparked tenuous alliances between the outdoor industry and tribes, the two gourps have turned their attention toward solidifying that relationship. But these alliances don’t always come easily. Like any use of the land, outdoor recreation has its impacts, and historic animosities stem from climbers and rafters ignoring the sanctity of spaces like Ship Rock, the Snake River, and Devil’s Tower.

Take Colorado’s 14,000-foot-tall Blanca Peak (Sisnaajini) which is one of four mountains that bound traditional Navajo lands and figures in their creation stories. Necefer has hiked up to the lake below Blanca, a popular spot for peak-baggers and off-roaders, and found scattered garbage.

“This is a sacred place and has a lot of significance, so just tread lightly,” Necefer says. “The principles of ‘leave no trace’ and minimizing impact come back to respect not only for the natural environment and what’s around you, but for all of the thousands of years of people that have come here before you.”

If people knew this place’s cultural history—or, for example, that Rocky Mountain National Park has traces of human presence dating back 10,000 years and continuing into the 1900s—perhaps they’d take a little more care.

“There still is a population of people who don’t think Native Americans are around anymore and would be surprised to know there are 573 federally recognized tribes,” says Ernest House, Jr., executive director of the Colorado Commission on Indian Affairs. The state recognizes 48 tribes who claim traditional homelands in it, and roughly 83,000 American Indians or Alaskan Natives still live in Colorado, according to Census data.

“We’re still here, we’re still thriving, and we’re still around trying to honor our culture and our heritage,” House says.

As Colorado wrangles a booming population and a growing pinch on its resources, House and Necefer both argue, who better to turn to than the people who have the longest history of stewarding these lands than Native people? For the first time, the state plans to do just that this year.

The Department of Natural Resources’ Parks and Wildlife Department is working on the latest draft of the State of Colorado Outdoor Recreation Plan. That plan is rewritten every five years to qualify the state for federal grant funds, including those from the Land and Water Conservation Fund, and is maturing into a vision document for the outdoors.

“It’s looking at how we treat our natural resources, our wildlife, other users on the trail, outdoor rec, and cultural resources,” says Jody Kennedy, public involvement planning specialist with Colorado Parks and Wildlife. “Our state’s population is growing so rapidly that the need for a stronger stewardship ethic is really critical. That is kind of a core piece that brings these diverse users together. We can all recognize that need.”

So the state is trying to involve tribes in that work and ensure the final plan includes their priorities.

“Tribes often have been left out of management structures and haven’t been consulted on lands that are bordering the reservation,” says Aaron Mike, owner of Pangaea Mountain Guides, native lands regional coordinator for the Access Fund and a Natives Outdoors ambassador. Mike grew up exploring Monument Valley with his grandfather, discovered what rock shoes and a chalk bag can do, and has been climbing for the 17 years since. “It would be a huge step just to have that seat again.”

One way Necefer, who holds a Ph.D. in engineering and public policy, argues these new allies could cement ties between state governments and Native people is through economic integration.

“If tribes have a major stake in jobs or employment, that relationship can be really solidified and force the need to work together,” he says. “I think the alignment of interest is already there in a big way, especially around environmental issues.”

Kennedy, like Necefer, says outdoor recreation could secure the economic vitality of Colorado’s rural communities, including those on and near tribal lands. While it’s too soon to say quite what projects could stem from this plan, there’s hope it will also imbed some of that cultural sensitivity Necefer says is needed.

“The tribes connect us to Colorado’s history in a really important way and we need to think about doing a better job of connecting people who are in the outdoors recreating, whether they’re climbing a fourteener, on a trail or in a state park, to the historic presence of tribes,” Kennedy says.

The renewed efforts from the state have been met with some interest from the tribes and they’re working out what their input might be, House says. There’s also been a little skepticism. Tribes have previously seen surveys on community needs identify those issues, and but agencies have never put services on the ground to address them. What remains to be seen is how the state responds to the feedback to this survey, which was tailored to ask about management issues specific to tribes. Kennedy says a first read on feedback shows tribes asking the same questions a lot of communities come up with around outdoor recreation and conservation, health benefits, and how to increase opportunities to sports that aren’t always affordable or self-explanatory.

As it stands now, it’s like tribes are deliberately left out of the discussion around Colorado’s full-speed charge into becoming a booming outdoor sports destination. “There’s been an initiative to create more mountain biking trails and loops through southwest Colorado, and sometimes when it comes to tribal lands, it just stops,” House says. “I think sometimes people are afraid to approach the tribes.”

Stepping into these conversations may at least help people get past some of the fears about engaging with the tribes, if not learn how to obtain permission to enter tribal land or to understand why some areas are off limits.

“If we continue to stay silent, it just perpetuates that division,” House says.

One of the places the state is working to ease those divides is in its annual Partners in the Outdoors Conference, organized by Dan Zimmerer, statewide partnership coordinator for Colorado Parks and Wildlife. The event assembles outdoor industry advocates, business owners, hunters, anglers, and conservationists to talk about Colorado’s public lands.

This year, House was invited to speak on a panel with Necefer and Steve Whiteman, director of wildlife management for the Southern Ute Tribe, which runs a wildlife and conservation program. It was his first invitation to that event, House says. They’ve been working to add diversity each year, Zimmerer says, and will continue to as they plan next year’s event.

“We need to make sure all Coloradans are connected to the outdoors and feel like they’re represented, and when that happens, it really sets the stage for good things for conservation and recreation in Colorado,” Zimmerer says.

If all of this sounds like a lot of good intention and not a ton of change on the ground, that’s because, in some ways it is. Tribes are expected to reconvene at an upcoming Outdoor Retailer show—but the state outdoor recreation plan won’t be enacted until 2019.

“We might not know the answer, but we’re starting the conversation,” Zimmerer says. “We’re trying to get the right voices in the room talking, and we don’t know where it’s going to lead.”

To continue those talks, shortly after Outdoor Retailer’s booths were packed back down into storage and the convention center in downtown Denver emptied of ultralight tents and next season’s cut of rain jackets and yoga pants, Necefer and Zimmerer headed out into the field. They made the hike up to North Table Mountain above Golden, and there, between pitches of basalt—a new hobby for Zimmerer—they talked about next steps for this work.