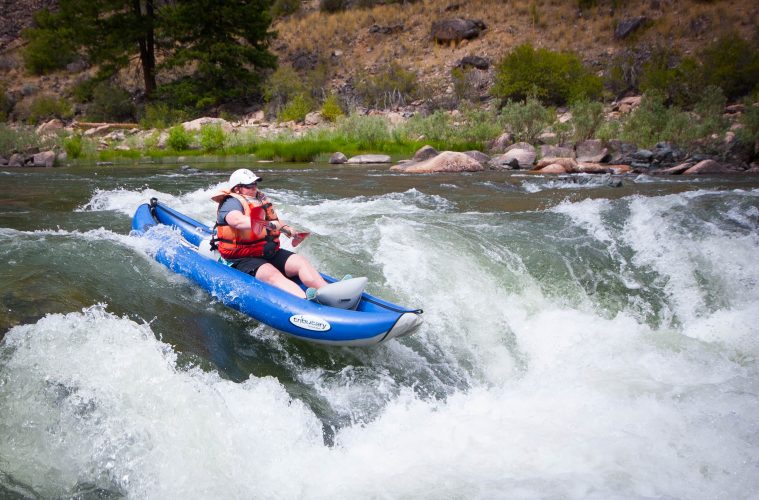 Living in the Stream

Fifty minutes after leaving Boise, Idaho, our Cessna bumps to a stop in one of the most beautiful places I’ve ever seen. We’re deep in the River of No Return wilderness, the largest protected roadless area in the continental U.S.

The weather, however, sucks. A cold drizzle casts a grey film between us and the sun. We shiver in layers of polypropylene and neoprene foam. But the river water is emerald clear here at the confluence of Indian Creek and the Middle Fork of the Salmon River where tinfoil-bright fish swim a thousand-plus miles from the Pacific to spawn and perish.

That’s a thought I keep to myself, since I am on this trip with 16 men and six women, ranging in age from 26 to 40, who have refused to die. They’re cancer survivors taking part in First Descents (FD), a non-profit adventure-therapy program that offers healing through surfing, climbing and kayak trips. Our plan is to negotiate 75 miles of wild, untamed river, littered with 30 Class III and IV rapids. For safety, we’ll follow world-class FD kayakers Willie Kern and Corey Nielson, with guiding and support from Greg McFadden’s Idaho outfitter Canyons Incorporated.

We set off, and paddle a flotilla of oar rafts, paddle rafts, one- and two-person duckies and hardshell kayaks into water with jouncy riffles. I share a ducky with a young woman named “Ativan,” a nickname earned from her drug of choice for in-flight panic. Other participants have nicknames too: “Truffles,” “Birdshit,” “Peaches,” each acquired on previous FD trips. Each has also undergone hideous rounds of chemotherapy and radiation, just as each, at some point, was healed. They then faced another obstacle: a dearth of post-cancer support for their age group. But at some point, each found FD, which, since 2001, has provided hundreds of trips for young adult cancer “fighters and survivors.”

Ativan is in remission, like nearly everyone in our group. Only one person still actively battles cancer. She’s “Rev,” so named because she’s an ordained priest. Rev’s the one I most want to boat with. I was abused as a child. I ran away at 14, nearly leaping off a 400-foot-high bridge. Leap I did not, and eventually I found healing in the outdoors. Or at least I thought I was healed. My therapy grew into a career connected to wilderness, and I even confronted my abuser. But sexual abuse survivors suffer many lifelong after-effects, including fear, shame, guilt and feelings of powerlessness. Abuse and cancer differ, but studies show survivors of both share some of the same mental struggles. To me, First Descents makes sense—and so does running the Middle Fork with this group.

I ducky with Ativan but my eyes keep drifting toward Rev. She’s five-foot-four and weighs 190 pounds. Years ago, she was a Crossfit fanatic. She laughed on day one when we sat around after paddling, sharing stories on the beach. She told us how years back, she’d gone to a Crossfit championships and, hungry, sought a burger. “But get this,” she said. “With my meal ticket, I could get an organic, grass-fed one with a gluten-free bun. A bun with gluten, though? That was $2.50!” Then the real kicker: Rev had done the Crossfit comp with only one lung.

She told me this one day as we lounged on a riverbank: Back 2005, at 29 years old, she felt “just down, just crappy.” She went to several doctors. None believed she had a problem at her age. It took seven weeks between the first scan that showed “an area of abnormal density” until she could convince a doctor to operate. “It wasn’t until they were inside that they realized what we were up against  and decided to remove the lung,” she says.

Then in 2010, she met FD co-founder Brad Ludden. “He started bugging me about coming on a trip,” she says, “and I kept saying, ‘No thank you.’ Then it got to the point where he wasn’t asking me if  I would come on a trip, but which one would I come on.”

She finally enrolled in a surf trip in Santa Barbara. It was the fall of 2012 and she felt relieved to have had an incredible adventure. Perhaps more importantly, she met a young woman named Lisa Panici with metastatic brain cancer. Despite near-total spine immobility, several FD’ers got ‘Nini up on a surfboard. With the help of a guide, she caught a small wave, rolling in from the steel-blue Pacific. “There’s ‘Nini, and she’s yelling, ‘I’m surfing! I’m fucking surfing!’” Rev remembers. “That was September. ‘Nini died in December. But for that week she was happy.” Now I am witnessing Rev’s enjoyment. Over the days, we talk and joke. Paddling alongside me, Rev seems healthy. But she’s taking a cocktail of seven different medications. She can’t eat—strange, given her recent 80-pound weight gain. By day three, she’s losing her spark, mostly because her pain drugs counteract her lung drugs. As a result, she foregoes her pain medication, which leaves her body feeling as if it’s burning in acid.

The usually upbeat Rev retreats from her ducky to an oar raft while the rest of the group goes on whooping down the river. In the morning, she seeks relief by dunking herself in an eddy. But by lunch, it’s all she can do to walk the hundred or so yards from the beached oar boat to a tree, collapsing beneath it.

We carry on, but later that night, I hear a terrifying hacking coming from her tent. Just as I’m about to call out, it goes silent. During this stretch I’m frightened. But then the hack starts up again, continuing most of the night. The next morning, though, Rev’s up, saying, “I have lung cancer. I cough. What do you expect?”

It goes on like this, as I watch my now-friend act in the bravest manner possible. It’s not easy running a river, in the middle of nowhere, with bucking-bronc rapids. It’s not easy enduring blazing sun or freezing rain with no real shelter to retreat to. It’s not easy realizing that even with hardships, this place is paradise, and you’ll soon be leaving paradise. And it must be a thousand times harder battling the effects of cancer than the effects abuse.

By day four, Rev seems to be feeling better. Team FD rises early, with 15 river miles to tackle, and in those, no less than nine rapids rated Class III or higher. Over the course of the trip, I’ve surprised myself by being more afraid of big water than I’ve been in the past. I have whitewater kayaked before, but of late I’ve grown chicken. On this trip, when others tried kayaks, I didn’t. Now, inspired by Rev, I decide to win back my courage. I talk my way onto a stand-up paddleboard, and take off feeling brave and special.

Before long, we come to a stretch of water with two technical rapids. The first goes great—I stand, proud albeit wobbly. But in the second, I hit colliding, offset waves, drop to all fours, and flip in fast, hissing water. Fortunately, one of our guides rescues me in his kayak. It was exhilarating, swimming in the icy shock, but also disorienting, and after the swim-to-near-rock hit, I get jumpy. That night, I join several FD ladies to sleep on the beach. But instead of soothing me, like it has in the past, the sound of my favorite river spooks me. The next morning, our last, we wake, eat breakfast and do yoga. When we board our crafts, Rev and I take the single duckies and head toward the most rapid-heavy section of the river.

I still feel off, which works against me. At the top of a Class III wave train, I freeze up, flip and come out of my boat. I’m underwater, getting sucked into roiling hydraulics. I’m stuck—no idea which way is up. I’m recirculating in a frothing hole. For several interminable seconds, I think I might actually drown. I make a decision: fight. With lungs screaming, I curl into a ball, thrash my arms and pop out of the chaos. Almost immediately, I see our guide Sweet D’s kayak, and, beyond it, Rev’s face.

Within seconds, someone grabs my PFD and pulls me onto a raft. Then for some fucked-up reason, I start laughing and crying. Cold, shuddering sobs wrack my body, followed by wild, maniacal laughter. I know why. Here’s what’s happening: I’m so relieved, because I just lived—and so sad, because Rev might die.

But that’s what we all will do, isn’t it? Die, with or without warning. And maybe Rev is so strong because she knows more viscerally what’s coming. I look up river and see her in her hot pink ducky. She’s on the middle of a tongue of water leading to the rapid. She’s going straight for the one that sunk me.

I see her face, squished atop her size-XL life-vest. At first, I think she’s afraid, but no—she’s focused. Our guide grabs the nose of her boat and angles it so she’ll hit the line just right.

She’s already paddling when she crashes into the rapid. Then she keeps paddling, for her life.

Tracy Ross is the author of The Source of All Things.