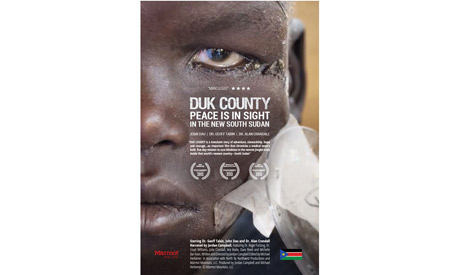 The Jordan Campbell film Duk County: Peace is in Sight in the New South Sudan won both a Moving Mountains Award and the Indomitable Spirit Award at its premier at the Telluride Mountain Film festival in May. The acclaimed documentary about curing blindness in South Sudan is showing in Boulder at the Adventure Film Festival October 3–5. Campbell took a moment out of his busy film tour schedule to talk to EO about climbing mountains, storytelling and changing the world.

You’re the Director of Public Relations at Marmot. What inspired you to become a filmmaker?

My passion, outside of my core job, is storytelling. Film was an evolution from photography and journalism. In South Sudan, I went in with the intention of capturing the work that Dr. Geoff Tabin, John Dau and Dr. Alan Crandall were doing to bring eye care to villages, in as many mediums as I could. Right after I returned, there was a flash of tribal violence that killed 3,000 people. At that point, I felt a moral imperative to tell the story. The most powerful way to do that was through a film.

Is there a connection between climbing mountains and creating positive change in the world?

I’m 25 years into this, in terms of traveling the world and living adventure, so I’ve realized that as a climber-mountaineer, you go to these really far off and remote destinations where sometimes you’re the only outsider to bear witness to it. And it’s not always pretty. You see people who are sick and downtrodden. You see war, natural disasters, and extreme poverty. There comes a time, maybe it’s part of getting older, when you start taking a look at your outdoor experiences and start doing a cost-benefit analysis and wondering, what’s the best application of my skills? The natural progression seems to be a desire to do something that gives back.

How has South Sudan changed you?

For me, seeing South Sudan’s enormous struggles firsthand, the life take-away is really about global stewardship in the 21st century—a need to reach across borders with a sense of urgency. So many people in the developing world can benefit from our actions in the industrialized, modern world and we’re infinitely capable of making a difference. I also spent a ton of time reviewing BBC and UN archival footage—some of which was included in the film—that showed in graphic detail the horrors of North and South Sudan’s 40-years civil war. It really got under my ribcage and inspired me to do more with my life as writer/photographer/filmmaker.