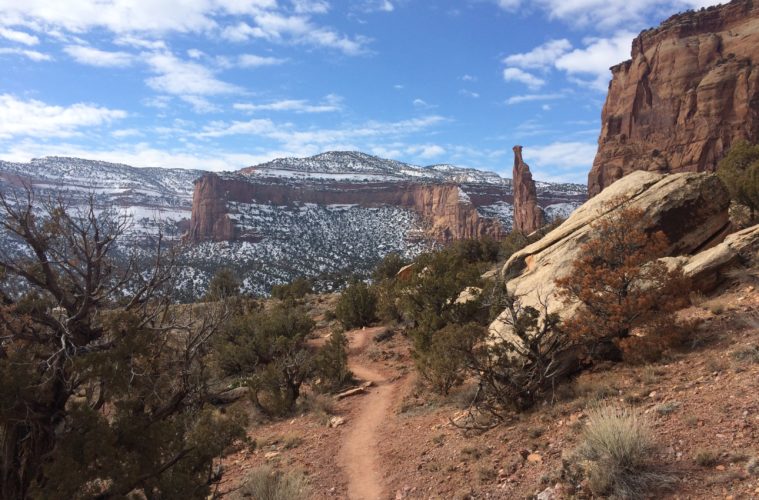 Photo by Will McGough

A Wintery Weekend in Grand Junction

When I first arrived in Grand Junction on a wintery afternoon, I did what every visitor should do upon arrival: I made the short drive to the Colorado National Monument. There was no guard at the welcome shack, and I drove up the winding roads, through small canyons that reminded me of Arizona and Utah. Snow was sprinkled at the tops of the canyon walls and in the shady corners, but for the most part, the rocky landscape was dry, rich with juniper trees and showing alternating variations of beige and red. Most of the trails were empty – a few cars here, a few there. Along the Monument Canyon Trail, I discovered tall monoliths and slick rock. It was not what I expected to find in Colorado.

The next day I drove to the local ski hill, Powderhorn. There couldn’t have been more than fifty people on the slopes that day, and I was pleasantly surprised by the lack of development. There were one or two condo buildings as you passed the main entrance, but otherwise, it was pretty simple: One big, basic lodge at the base of the runs, and a cafeteria-style lunch room and bar that was on par with street-level pricing ($9 for a big burrito, $5 for a craft beer). And the skiing was good. Very good. It’s a small mountain compared to some of the Front Range resorts, but it has everything you want, including some fine tree runs and side country opportunities, whose appeal is enhanced by the fact that no one is there. At 3 p.m., a half hour before the lifts closed, I was still getting fresh corduroy on many of the groomed runs.

Just above Powderhorn is the top of the Grand Mesa. Apparently, it’s the largest flattop mountain in the world, the hub of recreation for both summer and winter activities in the Grand Junction area. Whereas the National Monument had been more like Utah, the Grand Mesa was the Colorado I was expecting – it had that Rocky Mountain, backcountry feel, dominated by alpine lakes and tall pines. The Mesa Scenic Byway runs 63 miles through the national forest, and it’s the gateway for trails, campsites, small cottages, lakeside lodges and pine forests.

Down in the valley, adjacent to Grand Junction proper and beside the Colorado River, is Palisade, a small agricultural town with more than a dozen wineries, a distillery, a brewery and a reputation for the best peaches in the State (Palisade Peaches). I tasted at a few of the wineries, which were mostly empty, then went to check out the distillery. There were a few people hanging out when I arrived, but not long after, my friends and I were the only patrons. Later that evening we walked the quiet streets of downtown Grand Junction, passing restaurants, breweries and old-school, single-focus shops, like a shoe store, book store, art gallery, music store and fishing-supply store.

Sometime on the third or fourth day, after all we had experienced, I looked around at my friends and wondered aloud, why is no one here?

I asked as many locals as I could throughout my trip and the conclusion was simple: Most people in Denver view Grand Junction as little more than a place to get gas on the way to Southern Utah. I suppose that viewpoint is understandable to some degree. Passing through Grand Junction on I-70, very few of its secrets are revealed – for example, there is no direct exit for the downtown area from the highway. For Denverites passing through, there is not much to bait them in. And besides, there are closer ski hills, there are closer trails, and if you’re going to drive four hours, there are sexier destinations to be had. Right?

Well, perhaps it’s time to take another look. Grand Junction is much more than a pass-through place – in fact, it is placed perfectly. It’s on the Colorado Plateau, the Colorado River runs right through it, there’s a wine country and ag land, an affordable ski hill (day pass at Powderhorn is $71; season pass is $260), a university (Colorado Mesa University), and an evolving downtown area. Plus, you can still make that jaunt to Southern Utah, as Moab is less than two hours away.

Here are a few things to keep in mind, next time you “pass through” and decide to spend a couple days:

Downtown Grand Junction: Unless you’re renting an apartment or a room on the Mesa or in Palisade, your best bet for a hotel is in downtown Grand Junction along Main Street. The lodging itself is simple – there’s a Hampton Inn, a Springhill Suites and a Fairfield Inn – but it puts you in walking distance to the restaurants and shops. Try the Dream Café for breakfast, Rockslide Brewery for local beer and pub food and Bin 707 for a nice dinner and cocktails.

Powderhorn Ski Resort: Though this experience is offered in some form at many ski resorts, consider trying out the Ski Patrol Ski Along at Powderhorn. It is a good place to try out this kind of offering, one because it’s cheaper than at other places ($95 for four hours), and two, because the size of the mountain allows you to really grasp and understand the job (and life) of a ski patroller. You’ll dip into the ski patrol huts to learn about daily rounds and routine, then hop out on the slopes to check out avalanche conditions and hazards. Perhaps the best part is the time in between, when you are simply skiing and riding the lifts with the patrollers. Not only do you essentially get a guide to the mountain, but you get to kick back and hang with some of Grand Junction’s coolest residents.

Grand Mesa: The 63-mile Mesa Scenic Byway is a good place to start exploring the 300-plus lakes. There are many trails for snowshoeing, and the Grand Mesa Nordic Council has developed a system of cross-country ski trails. Otherwise, check out Vega State Park.

Palisade: Even in winter, wine flows in Palisade. Pop into a few of the tasting rooms and meet the local characters/employees, who are much more accessible for conversation during the slower winter months. If you catch it on one of those clear, sunny winter days, rent a bicycle to get around town between wineries.