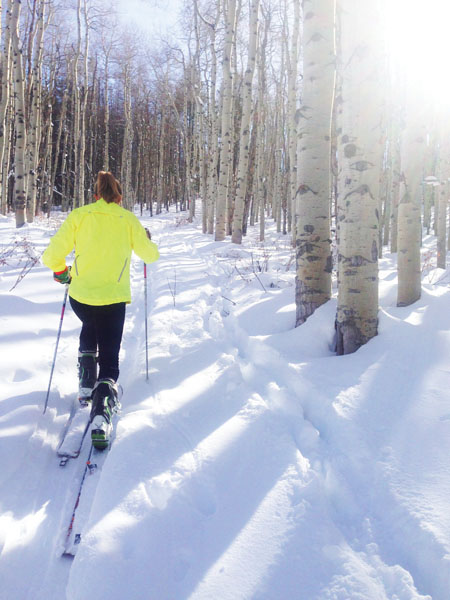 As a backcountry skier who has more ski days than partners, I used to tempt fate by skinning uphill on the outskirts of Eldora Mountain Resort, then skiing down the glades or groomed slopes inside their boundary ropes. Lift tickets are for those who use the lifts, I assured myself. But ski patrol tended to disagree—vehemently. On one occasion they even attempted to chase me down to my car in order to call the police and cite me for trespassing. And if they’d been a bit faster skiers I may have landed in jail—for skiing uphill on forest service land. As it turns out, Eldora owns the parking lot, but we collectively own the forest service land they operate on.

Driven by equipment innovations and an ever growing interest in fitness, backcountry is one of the only growth segments the snowsports industry has seen in the past few years. It seems like everyone—from environmentally-conscious skiers, to split-boarders, to cross-training endurance junkies and recreational fitness-skinners—wants to climb up the mountains they then ski and snowboard down, whether for fun or exercise or both. This makes the local resorts the obvious option for training and fitness efforts when the backcountry avalanche conditions are questionable, or when you can’t find a ski partner.

Ski-mountaineering, or “skimo,” was also recognized this year by the International Olympic Committee as a sport for possible inclusion in an upcoming Olympics. “Recognition essentially means that the IOC believes the sport is mature enough, has sufficient support, and sufficient competition for inclusion in the games,” says Nick Francis, President of the U.S. Ski Mountaineering Association. “It is doubtful that we would be in the next games, but China 2022 is a possibility.”

You might expect that ski resorts would be scrambling to accommodate these new skiers. After all, growing the community inevitably leads to increased sales in one form or another, whether it’s in food and beverage, season passes, or day tickets. But so far, adoption and inclusion has been a somewhat slow and painful process, which has resulted in a patchwork of regulations across the country. Some areas allow skinning only before or after lift operating hours. Others have vague policies, where it’s generally allowed, but depends mostly on who you run into on your way up. Then there is the scorched earth, cease-and-desist-or-you’ll-be-carted-off-in-a-paddy-wagon attitude.

“Resorts started seeing this trend take off around 2012 and it’s really snowballed into a sought-after activity,” says Jennifer Rudolph, Director of Communications for Colorado Ski Country USA. “They are now seeing guests and out-of-towners who are looking for places where they can ski uphill.”

A few of the Mountain West’s finest ski resorts have embraced this new wave of human-powered skiing by developing policies that allow for uphill travel within ski area boundaries. “The Aspen area and Vail, especially, are on the forefront of resorts that really see the value in this as a community builder that establishes a new level of engagement,” says Francis. “It’s something very small that they can do that creates a community that’s very much to their benefit.”

In 2014, Crested Butte began to capitalize on the energy and excitement of the trend and they now have the most progressive uphill program. “Crested Butte is the epicenter of uphill resort travel,” says Francis. The resort sells single-day uphill tickets for $10, an uphill season pass for $100, and even groom a free trail on Snodgrass Mountain, adjacent to CBMR, for those who don’t want to pay for the workout. There are 122 ski resorts in America that operate on National Forest land, including Vail, Aspen, Crested Butte and Eldora. Surveys show that hiking is the most common recreational reason for visiting a national forest, with downhill skiing a close second (roughly 25 million skier visits). “The majority of the resorts are operating on public land,” says Francis. “They have a lease and more or less control the property, so they can limit access as they see fit.”

Purchased in June by Utah’s Powdr Corp, just under half of Eldora’s ski resort is on forest service land, for which it has a special-use permit to operate the business. New blood brings new attitudes and for 2016/2017 Eldora is finally going to allow uphill traffic. “Quite honestly it wasn’t in our operating plans in the past,” says J.P. Chevalier, Eldora’s Director of Marketing and Skier Services. “But, we’ve talked to a lot of people and we’ve got a solid grasp of where the market is today and what people are looking for. AT [alpine touring] can present its challenges since we we are a tiny 650-acre place, but we’re going to be doing something small this year, to allow it as a trial.”

To avoid a Bond-like ski chase, Rudolph says, just know before you go. “The smartest thing people can do is just be prepared and know what each resorts rules are before they head out.”

Five resorts where you can earn your turns.

Two uphill access routes head to the top of Ptarmigan and the top of the Continental Divide. Dogs under voice command are allowed only when lifts are closed. Free, but you must sign up for an Uphill Access Card, good for the season, at the ticket office. skiloveland.com

Vail has an incredibly accommodating uphill policy but the mountain and Forest Service ask that you call 970-754-3049 for updated information (it can change daily) before you go. Dogs are only allowed when lifts are not running. Free. vail.com

The resort is allowing uphill skiing on a trial basis this season. You must stay on the designated route, only ski during area operating times and obey blackout dates. $16-$25 day pass, $89-$99 season pass add-on, $149-$129 season pass. eldora.com

Matt Hart’s work has appeared in National Geographic, Outside and Men’s Journal and he’s a former professional endurance coach. To atone for his sins, he bought a seaon pass at Eldora the past two seasons.