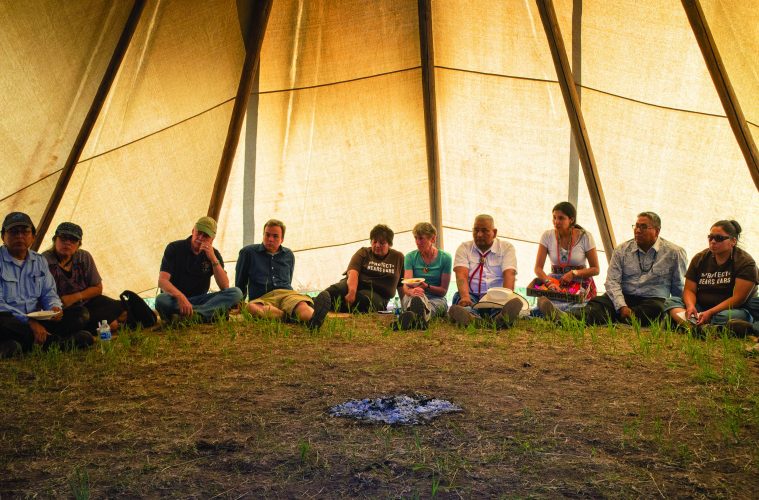 Wednesday, December 28, 2016 was a momentous day for the Native American residents of San Juan County, a day their people would remember forever. It was a day for celebration, when they finally got an equal seat at the table. It was a day Native Americans finally  got to right a few of the wrongs that had been inflicted upon their ancestors. On that day, the Obama White House announced the creation of the long-debated Bears Ears National Monument. It also may have been the day that changed the management of our natural resources forever.

Tucked into the dry and dusty southeastern corner of Utah, Bear Ears encompasses a whopping 1.35 million acres of high desert filled with solitary sandstone canyons, high lonesome mesas, remote wilderness areas and remnants from the Native Americans who lived there for millennia before the arrival of European settlers. It’s bigger than all of Utah’s national parks combined. Five different tribes (Navajo Nation, Hopi Tribe, Ute Mountain Ute Tribe, Pueblo of Zuni, and the Ute Indian Tribe) consider the area sacred and the land plays into many of their creation stories.

“It is one of the most important pieces of land to my people,” says Mark Maryboy, Utah’s first Native American county commissioner and a longtime local activist. “The area is so special, so sacred, that the tribes have been trying to protect it since they were first forced off it by the United States government.”

Not everyone rejoiced, however. Within moments of the announcement declaring Bear Ears a national monument, Utah’s congressional delegation began to fight it. Governor Gary Herbert said he was “disappointed,” Senator Orrin Hatch called it an “egregious abuse of executive power,” and Representative Jason Chaffetz said it was “a slap in the face to the people of Utah.” December 28 was also the day these politicians decided that the monument had to go.

Why has Bears Ears, one of a record 29 monuments that President Obama designated during his eight years in office, become such a lighting rod of controversy? To understand that long history and why the fate of Bears Ears may carry even larger future public lands-protection repercussions, you have to go back to July 2015. That’s when members from the five tribes, during meetings within Bears Ears, decided they needed to unite if they ever were going to be able to protect the land they held dear. Each tribe had already been working separately towards this common goal, yet experiencing little success in gaining agreement from local and state government. Together their voice carried far more weight.

“It was the release of the Public Lands Initiative (PLI) that finally made us realize we had to do something,” says Carleton Bowekaty, councilman for the Pueblo of Zuni Tribe. “It ignored many of the issues that the tribes held dear and focused on keeping lands open for mining, ranching and oil exploration.” The controversial PLI, a bill co-sponsored by Utah Reps Rob Bishop and Jason Chaffetz, proposed keeping the Federal Government out of Utah land management. It was the end result of several years of meetings designed to satisfy all interested parties but the tribes still felt ignored.” It blatantly focused on the interests of  [white] settlers who have only been here for 130 years, not the tribes who have called this area home for thousands,” says Maryboy.

In response, the Bears Ears Inter-Tribal Coalition, which grew out of those meetings of five tribes, did something no other Native American group had ever done: They turned to the Antiquities Act to protect their interests. The Antiquities Act was created in 1906 by the 59th United States Congress to preserve precious American landscapes, allowing presidents to declare national monuments to protect significant natural, cultural or scientific features. Teddy Roosevelt first used it to create Devils Tower National Monument, and all but three presidents since (Richard Nixon, Ronald Reagan and George H.W. Bush) have invoked it, often using it at the end of their terms to leave a legacy for future generations.

During the year and a half after its creation, the tribal coalition worked to craft a proposal that would protect the areas surrounding the Bears Ears Buttes—the distinctive geological formation that lends its name to the area. In it, they detailed the ancient villages, pueblos and cliff dwellings their forefathers had built. They catalogued the thousands of petroglyphs, cave paintings and rock art that tell the history of their people. They listed hundreds of sacred plants used for worship, as well as the sites for religious ceremonies. The proposal highlighted the tribes’ knowledge of the area, why protection was crucial, and why respect for the lands they once called home should be the highest consideration for designation. The document included their most important request: Native Americans would co-manage the Monument with the federal government through a five person commission—one representative from each tribe—that would advise on all aspects of the monument. If passed, the future would be unprecedented. Native Americans would finally have a say in how their ancestral lands are managed

President Obama’s final designation was 550,000 acres smaller than the tribes’ original proposal and it slightly modified the co-management plan, but it left the rest unaltered.

“The fact that we now have a say in how these lands are managed is momentous,” says Maryboy. “The local government that has ignored us for so long has no say anymore.”

Yet the pride that he and many of his fellow Native Americans now feel is about to come under attack, and the Antiquities Act itself may not survive the legislative onslaught that appears to be lining up in both the White House and Congress to roll back protections of public lands and emasculate the federal government’s ability to protect them.

Even before Donald Trump took the oath of office, the entire Utah congressional delegation and Governor Gary Herbert asked him to rescind the Bears Ears National Monument designation. Part of the severe response is a hangover reaction from Bill Clinton’s 1996 creation of the even larger 1.7-million acre Grand Staircase-Escalante National Monument. The 24-hour notice he gave the Utah government rankled lawmakers so badly that they became the leaders of the new Sagebrush Rebellion, forever introducing bills to take back their lands from the federal government. All of their efforts have been for naught so far, but that could change under the new administration.

Less than a month after Trump took the oath of office, Herbert and the Utah legislature turned the pressure up a notch when they passed House Concurrent Resolution 11, officially asking the President to rescind the monument. The vote passed both chambers overwhelmingly, mostly along party lines.

“It was not surprising that they passed it, they never really wanted to work with us in the first place,” says Maryboy. “They only care about exploiting the land.”

In repsonse, outdoor industry icon Patagonia publicly announced that it would no longer be attending the massive Outdoor Retailer show that has been held in Salt Lake City for the last twenty years. Arc’teryx, Polartec, Metolius and several other brands followed suit. After a terse meeting with Herbert, Outdoor Retailer itself joined the the exodus when it announced that it would move venues after the summer 2017 show. With it goes the $50 million dollars a year that the attendees spent while in the state.

Utah Democratic Party Chairman Peter Corroon fumed over the loss, bemoaning that, “With one breath, Governor Herbert touts our five, now six, national monuments to increase tourism, and with another refuses to drop the party lines for the betterment of Utah’s economy. After listening to our Utah Republican leadership talk out of both sides of their mouths for years, the outdoor retailers finally put their foot down.”

The national monument fight does not end with Bears Ears, however. With Congress and the White House in Republican hands, the time has never been more ripe for conservative Western reps to introduce legislation to forever recuse themselves from the Antiquities Act. There is precedent. Both Wyoming and Alaska successfully passed bills that require Congressional approval before the Act can be used in their states. And Utah has tried numerous times, as recently as the last Congressional session. The fact that Federal Government owns almost half the land in eleven western states—including 80 percent of Nevada—continues to irk the libertarian-minded, often industry-backed lawmakers of the Intermountain West. They want the feds out.

If some of these states are able to exempt themselves from the Antiquities Act, or the Trump administration engages in a wholesale sell-off of federal land, it could forever change the future landscape of the country. There is a silver lining: Over 30 National Monuments have been elevated to the status of National Parks (Grand Canyon, Pinnacles, and Capitol Reef) by Congress. And the threat of a president using the Antiquities Act has actually spurred conservative states to protect wild places—in 2105 Idaho’s Republican delegation pushed through the 275,655 acre Boulder-White Cloud Wilderness. And no president has ever rolled back a monument designation since the executive office does not like to usurp its own powers (though Trump has been dismissive of precedent).

“The feeling here among tribal leaders, and [with tribes] across the country is that it would be an extreme lack of respect towards us,” says Bowekaty. “We would immediately challenge it in court, and we think we would win. In fact, we hope that more tribes follow the blueprint we have set out here to protect the lands they hold dear.”

So while the country anxiously watches the Trump administration’s next moves on everything from foreign policy to Twitter use, there is one fight that could very well shape how future administrations set out to protect and manage federal lands. If the Native American triumph at Bears Ears stands, it could lead the way forward to celebrations similar to the ones held on December 28. If not, they are prepared to fight, and once-marignialized indigenous voices are proving very effective in conservation battles.

Across the U.S., Native American tribes, in conjunction with sophisticated legal teams, have been battling for the environment. They led the way in the removal of Washington’s Elwha River Dam removal (the largest dam removal project in the world). They partnered with Oregon and California to free the Klamath River of all dams. They also temporarily stopped two pipelines (Dakota Access & Keystone), rallying millions of Americans and the eyes of the media to their cause through peaceful protest, in the last decade. If Trump and the Republicans try to cut down Bears Ears they will have a battle on their hands, one that very well might gain the same national attention as the Dakota Access Pipeline. With the land at stake, the tribes are intent on winning.

Hudson Lindenberger is a contributing editor at Elevation Outdoors and writes for Men’s Journal. You can read more of his work at HudsonLindenberger.com