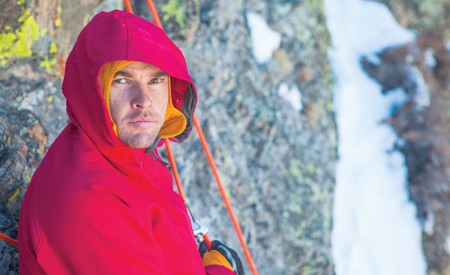 As a kid in New Hampshire, Josh Wharton was taught bold climbing by his dad. Wharton’s father essentially retired from climbing in the ‘60s, but every few years he’d still take young Josh out, tie him to a rope and solo from ledge to ledge as his son followed with the security of a top rope. “I really didn’t like it,” recalled Josh.

During his teens, Wharton regained interest in climbing with friends and immediately experienced “tons of freedom.” His dad, inspired by Josh’s level of enthusiasm, began to influence his son, sharing his modified systems and gear, showing him climbing pics and telling him which routes to climb. Since then, both his parents have died, his mother in 1995 and his dad in 2009.

Today, Josh, 34, boasts a route tick list too long to list in this article, but big highlights include routes in Pakistan such as the Azeem Ridge on Great Trango Tower with Kelly Cordes (VII 5.11 R/X, M6 A2, 7,500 vertical feet), which they climbed for 48 hours without water at an altitude of 20,000 feet, and Under Fire (VI 5.10 X A3 AI 4), with Brian McMahon. They finished that one with 150 feet of unprotected 5.10 to reach the summit. He has climbed V10, M10 and 5.13 in the same week without previous inspection.

Have you ever thought about setting the goal to climb the harder disciplines in a week beyond V10, M10 and 5.13?

I’ve thought about beating that. I haven’t tried to do it yet. It’s a little bit trickier since I moved from the Western Slope. It would be an ambitious goal for me, however, since I’ve only done a few 5.14s and a few V11s.

What did your mom think of your climbing?

I wasn’t really a climber when my mom was alive. She died when I was 16 and I just started to come into climbing. I went to school in Colorado and stayed there. I started climbing all the time in college. I would see my dad a few times a year but not as frequently when I moved.

Do you come from a long line of alpinists?

My dad was an alpinist too. He did all sorts of rad stuff back in the day. He was an artist and a sculptor and he enjoyed working on stuff in his shop. My grandmother and my grandfather were climbers too. I have pics from the ’40s of my family cragging in the Lake District in Wales with a rope tied around their waist while they were wearing nickers.

How do you deal with injuries sustained from being hard on your body?

Part of the deal is getting hurt. If you watch SportsCenter someone always gets hurt.

I came back more motivated since my accident [in fall, 2009 he came unclipped while rebolting a sport route in Rifle and hit the ground breaking his back]. Climbing is a hard sport to be good at all the time. I think when you come back from an injury you’re starting at zero, and otherwise you’re starting at 40 to 60 percent—you aren’t conscious of how much effort it takes to get back to that spot.

What are your thoughts on soloing?

I don’t solo as much as I used to when I was younger. I did the Bastille Crack in 5:40. I did the Yellow Spur in 13 and change. I soloed things in the Park [RMNP] for the [solo of the] Eiger.

How was soloing the Eiger onsight, in a day?

I thought it was an awesome experience. Because it snowed the night before there was a fair bit of post holing when I started. It covered the tracks through ice and snowfields. Having a trail is a big deal on a route like that. Mixed climbing is way trickier when the rock is covered in snow. I was lucky that storm came because there was no one else on the wall. Otherwise there would have been 20 parties on the route.

Good question. As I’ve climbed more and more I’ve gotten snobbier because I’ve got more routes that I’ve climbed. I like good rock with sustained climbing. Bad routes have bad rock and bad experiences. But I’ve done some routes on bad rock where I’ve had a great time, like in the Canadian Rockies.

How do you feel when you’re alpine climbing in the mountains?

I’m more comfortable there. Crazy experiences don’t feel so crazy anymore. When I started climbing in the ‘90s there was this Mark Twight, dark, summit-or-die mentality. I think the whole attitude regarding hard alpinism has gotten a lot healthier. If you feel in danger, then then you’re doing something wrong. [Laughs,] If you feel you’re gonna die, you’re doing something wrong.

I like climbing in those committing situations. It makes things really simple. You only focus on the teamwork and working well with your partner. You get moments like that when you’re cragging. But you get more of that locked in feeling when you get into a big alpine climb.

To make the second free ascent of the Hallucinogen Wall (VI 5.13+ R) in the Black Canyon. Then off to the Canadian Rockies—nothing super specific. There are a few alpine routes up there that I’d like to do like the North Face of Alberta and the North Face of North Twin. North Twin has only been climbed three to four times. I’ve hiked in there a few times but haven’t had the weather. It’s pretty amazing looking.