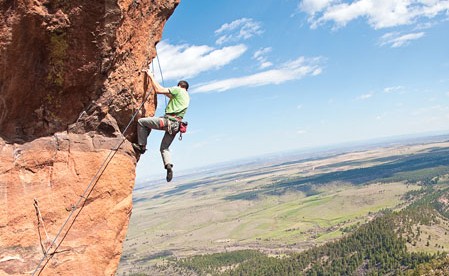 As any good stoner knows, you never throw away the stems and seeds: You hang onto them “just in case.” Because you never know when the next dry spell is coming. With the whole medical marijuana circus and the recent passage of Colorado’s Amendment 64, this has become less of an issue—if you have some ready cash and are bopping around the Front Range, you can’t help but trip over one of the hundreds of dispensaries that have proliferated like weepy tweens at a Bieber concert. It’s just that easy to get your Rocky Mountain High.

I haven’t touched the devil’s weed in a decade—somehow, having jibbering, paranoid seven-hour panic attacks lost its appeal—but I remember those days well. Climbers are not necessarily known for clean living. Anyway, to return to the kush, I’ve long thought that being a pothead and being a climber who’s lived a long time in one geographic area, are the same: First, you cherry-pick the choicest, juiciest buds from the bag—or climb all the classic local lines within your ability level. Then, when the buds are gone and the shake’s run dry, you smoke the stems and seeds—or tackle all the obscure, dangerous, overgrown, ignored, contrived, chossy, wicked-tough, or otherwise mingus routes you’d been avoiding. Never mind that smoking stems and seeds gives you a raw throat, double vision and a nauseated headache, as might climbing said sub-par routes—sometimes you just need to get high.

I’ve been in Boulder since 1991. After that long, even in climber’s paradise, you run out of buds. Yet we keep climbing anyway. Perhaps it’s because climbing has always been a sport of exploration, its main appeal being sampling new climbs, with their new holds, new moves in wild, new places, new techniques you have yet to master and unique mergers of rock and sky. As we age, we’d often rather be out somewhere aesthetic on a “whatever pitch”—a stem or a seed—than ticking a classic in some skanky roadside grotto.

Let’s examine seven categories of “Stems and Seeds,” with local examples of each. As you’ll see, there is even a perverse pleasure derived from unearthing (sometimes, literally) and surviving such climbs. It’s usually for good reason that you haven’t yet done these routes, and why everyone else avoids them, yet their anti-allure is also part of the charm.

My friend Derek and I were recently up in Boulder Canyon, figuring out which route to end our day on, when he pointed up at a discontinuous licheny arête above us. “What about that?” he asked. “The guidebook gives it two stars.” Huh, wow, holy shit. I looked up to see ten shiny bolts in the rock; it was as if a genie had, poof!, that very second put the climb there. While you could write this off to senescence, this was my tenth trip to the cliff and I’d walked under the route as many times. It just hadn’t stood out, in any way, as a rock climb.

Well, good news, friendos: There are hundreds of such “fun once” obscurities around—weirdo, nondescript, thrutchy, semi-contrived, peregrinating C and D grade climbs covered in light-to-heavy layers of moss, lichen, dirt and bird droppings, with nary a dash of chalk to helpfully mark the holds. I have a friend, Chris, who’s so twisted about ticking every route at a cliff that he’ll head out with guidebook in hand, deliberately seeking these unlovelies just to put a little X next to them in the book. Once, Chris and I climbed an arête called Coniferous Types in Eldorado that was two feet from the tempting jugs of a neighboring classic and also hemmed in by an annoying pine tree. Climbing it felt like dry-humping an upturned wheelbarrow, though Chris got his X that day. Choss is a British term for loose rock—the sound, perhaps, that a block makes sliding off a ledge: Chossssssssssssss! Boulder choss comes in three main forms: The diagonalling purple mudstone striations that zebra-stripe across Eldorado Canyon; the light-beige kitty litter sometimes found on the Flatirons steeps; and the booming, barely attached, flakes that loom like scimitars in Boulder Canyon.

When you identify the so-called “chosspiles,” you must make a decision: Is it worth courting injury or worse for that guidebook X? There is an unfinished climb in Eldorado called Psycho Killer, so-named because while attempting the first ascent, “Psycho” Kenny Black pulled off a giant loose block that severed his rope as he fell and killed him. So death is a real consequence. That said, there is also an entire cliff in Eldo called the Rotwand that is nothing but choss—every climb up its ignoble flanks is a spiderwebbed shit-heap of shattered, hollow, unprotectable pastry-skin. “(Rot” is German for “red,” though in this case I’d opt for “rotten.”) Still, a deviant few souls have climbed every route on the Rotwand.

Then there are the routes known for their lack of protection, the ones with forbidding “R” and “X” danger grades, where a fall in the wrong spot might spell a trip to the ER or morgue. It’s easy to procrastinate trying these climbs—or to never do them—and Boulder has plenty. So will I ever sack up, say, to lead the mind-control classic Perilous Journey (5.11c X), a 120-foot pane of unprotected sandstone at Mickey Mouse Wall that is a Boulder hardperson rite of passage? Fifteen years ago, sure, maybe, on a good day; today, with a wife and a kid, and knowing what I now know about gravity, probably not. This particular stem will likely remain unsmoked.

Ah, the short route, that two-bolt, twenty-foot superpile you deride every time you walk by, joking, “What googly-eyed crotch-goblin bolted that?!” Until one day, you have nothing else left to try, and so find yourself shoeing up below a climb barely taller than a parade-clown on stilts. Well, here’s the thing: These climbs are hard as hell, because the technical difficulties are compressed into a miniature package. It’s a bouldering sprint from start to finish. I need only recall Goat Fucker, a two-bolt “5.11d” at Avalon, Boulder Canyon, that took me most of an afternoon.

Climbers are notoriously lazy, so even in the bustling Front Range if you hike more than 15 minutes, even on weekends, the cliffs are generally empty. Of course, what happens with stems and seeds is that the hikes get longer and longer, until eventually two hours uphill, in the sun, through a death gully choked with rattlesnakes, teetering boulders, bears, mountain lions, poison ivy, and unexploded landmines is your standard outing. At which point, your climbing partners call-block your number. To get your death-march on, check out SoBo Buttress, above Eldorado Canyon.

I’ve got a long “to-sorta-kinda-maybe-do” list of these: routes that are hard for the grade or shut down climbers I consider stronger than me. Or that, as bona fide testpieces, will require me to get my fat, old ass in shape before I taste success. Particularly vexing are hard climbs from the 1980s and early 1990s, when the prevailing aesthetic leaned toward featureless faces and micro finger seams with fuck-all to hold onto. For a sampler, try: Eldo’s The Evictor, a “5.12c”  or Beethoven’s Fifth, a “5.12d” in Boulder Canyon.

Finally, there is the route so deep in the bottom of the bag —that black, gnarly, mold-covered seed—that it’s the last thing you’d consider smoking. These routes combine the other six types to produce a perfect storm of unmitigated crapulence. My vote goes to Gash Burn, a “5.11d.” To wit: 1) It’s tucked into a dim, hope-snuffing grotto hidden away below a host of other, better climbs up in the sunlight, 2) It finishes on a friable crack covered in frittered choss like the peelings off an onion ring, 3) With the blocky cave floor so close, you might deck onto your back and be paralyzed, 4) The climb is only eighteen feet long and has but one bolt and involves a V6 dyno, which likely makes it the world’s hardest “5.11d,” 5) It’s way up Dinosaur Mountain, a steep 40 minutes from the car, and 6) it was put up in the 1980s by notorious sandbagger Paul Glover, and took my friend Ted, a 5.14 climber, two separate visits. So there you have it: the last seed in the bag. I have yet to lay fingers to Gash Burn, and maybe I never will. I worry that if I send it, I might have to quit climbing, once and for all.

Matt Samet is the author of the memoir Death Grip.