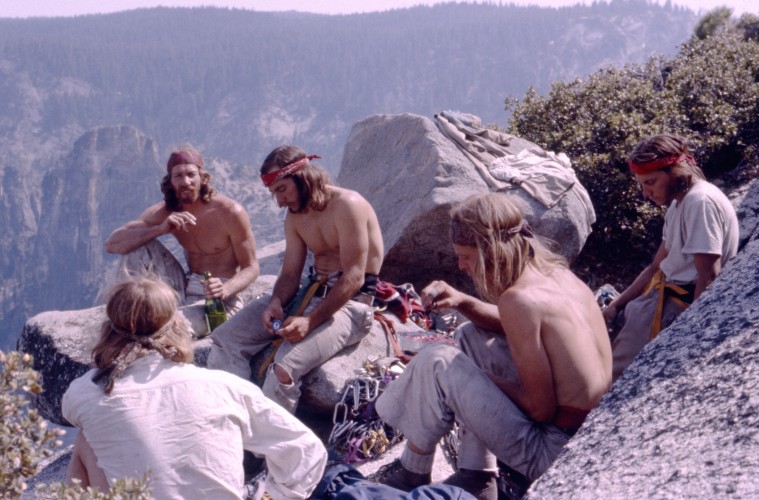 You know you have a dedicated following when on a cold, rainy September night you fill Chautauqua auditorium. It was a night that was more befitting the premier of the latest ski porn—puffy jackets, stocking caps, and rosy cheeks were in abundance—not the latest film from climbing movie mavens Reel Rock.

This was the ninth year for the annual film festival, and this time they only brought one film to show the anxious crowd, not the normal collection of shorts, but I doubt anyone left disappointed — Valley Uprising was excellent.

The film is the latest release from Boulder, Colorado based Sender Films, one of the festivals two founders, so they are allowed to demand the spotlight every now and then. The seven-year in the making film presents the sixty-year old history of climbing in Yosemite Valley, focusing on the colorful cast of characters that have populated this mecca of granite. It breaks the history into three parts, each one with its generation of purist climbers and its rock rebels, both are equally fascinating.

The Golden Age, from 1955 to 1970, presents the valley as an unspoiled gem that was calling to a generation fueled to follow a different pathway than the one offered by Leave it to Beaver and Father knows Best. These were youth driven by the beat generation, Kerouac, and a love of outdoor adventure; seeing the vintage footage of the wholesome fifties and sixties made me realize how boring it must have been, no wonder the cultural revolution of the late sixties happened, but I digress. The spotlight of this group of climbers is turned on two godfathers of big wall climbing Royal Robbins—the purist—and Warren Harding—the rebellious free spirit. As Robbins approached the walls with the reverence of a wayward monk, defining rules climbers follow to this day, Harding assaulted the routes with a hearty supply of booze, babes, and general bacchanalia. Their rivalry was intense and a driving force in early American climbing. Next up was the era of the Stonemasters, so named because of their love of marijuana and climbing, a new generation of climbers that assailed the walls in epic style from 1973 to 1980. This group took climbing to heights never before seen incorporating hard-core training, free climbing, and a fair amount of drugs to push the limits. The leader of this merry band was Jim Bridwell a legend on several continents who challenged his group of Camp 4 friends to follow him as he put up outrageous route after outrageous route. Their confrontations with the Rangers of Yosemite were legendary and mirrored the discontent of that era. The counterbalance to Bridwell was John Bachar a free soling legend who disdained the bolting of routes and the trappings of fame that was beginning to overtake the climbing world and ultimately ended the Stonemasters reign in the Valley.

The final act of the film focuses on the Stone Monkeys the current resident leaders of the Yosemite climbing scene. The enemy that might be insurmountable for this group to conquer is the popularity of the park its self and the 4 million plus visitors that overcrowd the fragile infrastructure. While highlighting the battles between the rangers and climbers, the final section of the film is a testament to the skills of modern climbing legends Dean Potter (free climber, base jumper, highliner) the rebellious thrill seeker and Alex Honnold, the free soloing machine, currently setting new standards that well could stand for years if not decades.

The sound track of the film features an excellent mix of sixties and seventies classics interspersed with modern artists that nicely keeps the film jumping.

Reel Rock much like other travelling film festivals, Banff Mountain Film Festival & Radical Reels to name a few, does not exist to show large profits. It allows the host groups to keep all monies once a licensing fee has been paid to cover operating expenses. This helps explain the popularity of it and the fact that within nine years it has become an event anticipated in cities across the world. They have helped numerous student groups, climbing gyms, and outdoor advocacy groups raise much-needed funds while expanding the reach of climbing across six continents. Last nights showing benefited the Access Fund and tonight’s helps the American Alpine Club.

The party like atmosphere surrounding last nights screening showcased why the local climbing community in Boulder is special. On a night most sane individuals would stay home, Chautauqua was electrified as hundreds packed in to cheer on the colorful characters that have inspired generations before us, and generations to come. If we would have got a foot of snow I bet you could not of kept them away, I for one am happy for that. Crowded house on a rainy night for the world premiere of Valley Uprising.
Photo  Hudson Lindenberger

Tonight is the second night in Boulder and some tickets are still available. Can’t make it tonight then catch it in Denver 9/13, Parker 9/26, Colorado Springs 10/1, Durango 10/9, Ft Collins 10/23, Grand Junction 10/25, and Dillon 11/1. For more information and to see a trailer head to their website here