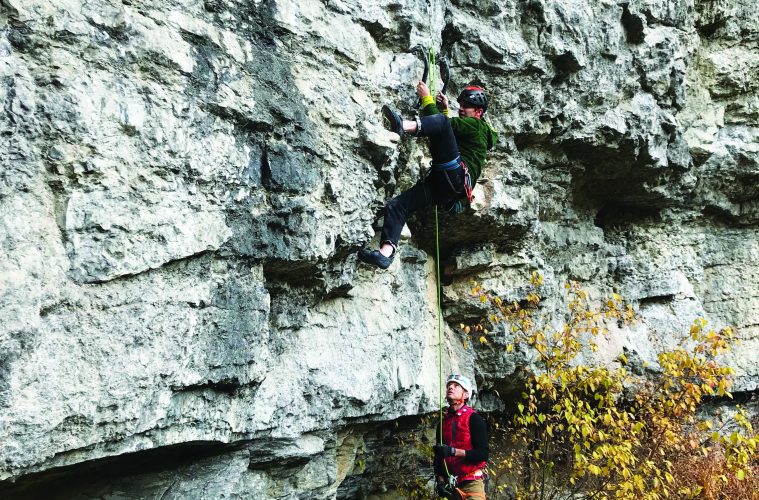 No Ice, No Problem

On the first of December, I was looking west toward the mountains from the top of Eldora Ski Resort. The view encompassed nothing but brown hilltops with specs of green. The warm conditions meant ice hadn’t yet formed at many of the easily accessed spots in RMNP or above Vail, but the warm weather can’t stop a handful of die-hards from taking their ice axes out anyway, to climb ice-free rock. Welcome to dry-tooling.

“For me, ice climbing is relatively straightforward—swing left hand, swing right hand, kick left foot, kick right foot,” says Gypsum-based pro climber Beth Goralski. “And generally, ice will only grow to vertical. Dry-tooling and mixed climbing is the next step up, and takes it from 90 to 180 degrees. It’s so much fun!”

Unlike ice climbing, where picks punch into frozen water sometimes the consistency of Styrofoam, dry-tooling moves are often insecure. A subtle shift in the hips can cause the tip of a pick to slip off an edge in a violent explosion, causing the climber to fall. That makes for a surreal scene—some climbers end up upside-down on roofs and radically overhanging features, their sharp points scraping down the rock until they catch on an edge. The sound of razor-sharp steel sliding over soft limestone sounds like fingernails on a chalkboard.

In mid-December, after cutting through the cottonwoods and zigzagging up a muddy approach with the assistance of guidelines tied between trees, Beth, her partner David Roetzel, and I reached the Designator Amphitheater above Vail. This is where legendary alpinist Jeff Lowe established the first mixed (rock and ice) route in the U.S., back in 1994, called Octopussy. To do the climb, Lowe linked several discontinuous sections of ice together by ascending the rock in between. For the finale, he pulled off several inverted moves out a roof to reach a curtain of ice at the finish.

Since Lowe conceived of mixed routes and dry-tooling 25 years ago, the sport has developed with lighter, easier-to-use gear, drawing ever more athletes to it. These days, dozens of routes surround Octopussy, with most of them bolted as safely as sport climbs. Today, just like back then, most dry-tooling routes in Vail finish on ice.

While dry-tooling is popular in Europe and Asia, there are few spots to practice here in the U.S. However, “it’s growing in popularity and there’s a younger generation doing it,” Beth explains.

That next generation may even get a chance to compete in dry-tooling in the Olympics, as the International Climbing and Mountaineering Federation wants to include it in the 2022 Summer Games in China.