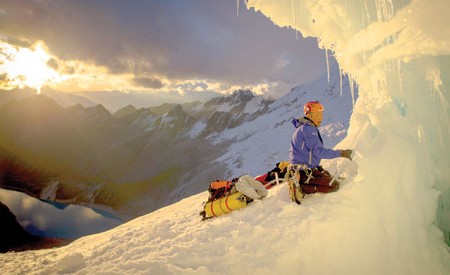 Kickstart Your Expedition on Kickstarter

I’m poised on a delicate filigree of ice, high on the greatest unclimbed face in the Andes—and I’m about to take the plunge. Over the preceding hour, I had picked my way through a minefield of crappy rock, rotten snow and frozen gravel. It’s steep broken terrain, no-man’s land, on a massive wall that’s half again bigger than the vaunted El Capitan, and far deadlier. I hang on a single tool planted in ice with the texture of dried up Swiss cheese. I reach down to place some protection (the first I’ve gotten in a long while). I lean to the left to access a crack… then… click. The tool pops. I’m airborne.

I love expeditions. It’s not just the adrenaline, it’s the life-affirming experience of climbing at the world’s best crags or in the world’s most challenging mountains. I’m lucky. Sponsors pay for these trips every three years or so. The rest of the time—usually once a year—I suck it up, empty my savings, cash in my frequent flyer miles and dive into a purposeful journey through a different culture and up a climbing objective.

Who doesn’t want to make that dream a part of their life experience? For most of us, the desire is the easy part. The issues are usually time and money.

Most climbers can’t afford the $3,000 to $8,000 dollars (per person) it takes to undertake a modest expedition or the dream climbing tour. Those who can afford it are usually locked into a busy schedule. Sponsorship is an option, but most often reserved for elite athletes or tied to social or environmental causes. The answer for all the rest of us aspirant adventurers might be right there on your laptop: Kickstarter.

Start With A Story

This spring, my climbing partner Mick Follari and I were well on our way to shelling out $3,500 each for a rematch with Santa Cruz. He’d just started dating Megan, a lovely girl whose kind heart was obvious the minute you meet her. Things developed fast. One day Mick called and said, “Something’s come up.” From his tone I instantly knew it was serious. I thought, “He’s either been diagnosed with cancer or Megan’s pregnant.”

Happily, it was the latter. Mick, endowed with deep reservoirs of patience and kindness, is great father material. Megan chose to carry on with the pregnancy. Though a gift to their lives, the pregnancy threw a spanner in the timing of an expedition that was already well under way.

The obvious issue in Mick’s mind was the risk of climbing balanced against the gift of an unborn child that fate has placed in his custody. I had no problem cancelling the climb—I’ve stepped out of bigger trips for lesser reasons. But Mick was determined to carry on.

I’ve spent my life avoiding conventions that foment risk to others. Alpinism is a high stakes game requiring deep introspection to discern and draw the line between personal desire and responsibility to others.  But in the unfolding events I saw the seed of a story.

All too often it seems, we hear about tough climbs, successful summits and heroic characters overcoming the odds. But here was something deeper, a story every human with children can relate to. Who among those who’ve had kids did so without personal sacrifice? Most know the tradeoffs are undeniably worth it. But seldom do we hear a story that describes how hard the transition can be.

To tell the tale we turned to Kickstarter. Our goal: Do the expedition and create a film we could share with climbers and non-climbers. The storyline: How an extreme climber handles mortal risk after learning he’s going to be a father.

We titled our program, “Expedition Andes: Something To Live For.”

Something to Live For: When Follari found out he was going to be a father, Takeda was ready to call off the return trip to the Andes. But then the two realized they could tell a deeper story through Kickstarter. Photo: Mick Follari/follari.com

Take It To The People

Kickstarter uses crowd-sourcing to democratize the launch of creative projects. Film, music, games, food, digital apps have all been funded. According to Wikipedia, “As of October 10, 2012, there were 73,620 launched projects, with a success rate of 43.85 percent. The total number of dollars pledged was $381 million.”

Our campaign has just seven days left as I type these words. With current pledges and verbal commitments, we have about 50 percent of our $21,925 goal. Chances are we won’t make it, but the experience can allow me to impart some lessons and encouragement for those of you with a dream to share.

They key is just that: sharing. If you have a product, a story, or a performance you wish to bring to term, Kickstarter allows you to access the public to solicit donations. In the outdoor world, successfully funded projects range from an all African-American climb up Denali to grow diversity in the outdoors to a dude riding a Honda C90 from Malaysia to the UK (see below).

Through Kickstarter you can narrate your story, lay out your project’s value and outline your plan. You also offer “rewards” to donors. For pitching an expedition you’ll need to incentivize donors. Few are going to give their money to fund a vacation. Thus for an expedition, products like a film, images, gear or expedition memorabilia make great rewards.

To start, a great Kickstarter video promo is the best way convey your message. It’s hard to beat a professionally produced video, but simple, sincere amature videos can be incredibly effective. Sincerity is key. Humor helps.

Be persistant and it will pay off. Just as in climbing, you’ll fail as often as you succeed. I’ve tracked a few projects that failed on the first round and succeeded after altering the message, strategy, and goal (see sidebar). A Kickstarter project is a job, sometimes full-time. Treat it as a serious obligation to your donors so you can deliver what you promise and make them feel as if they have been a part of the project.

My fall off Santa Cruz ended with cracked ribs, multiple bruises, and a weird crackle in my elbow that still hasn’t gone away. Though the accident ended our 2012 attempt, it grew into a new story. Mick and I will return with video and a new story. If our current campaign fails to meet its goal we will reboot and start another to pay for editing. If we climb our goal, we’ll have a triumphant tale. If we fail, so be it. But regardless, Mick and I will share a story about real life hurdles played out against the backdrop of the majestic Andes. See you on Kickstarter!

TELL A GREAT STORY: Whether your project is a narrative (film, literature, dance) or physical product, craft the story. Here’s an example of a great story that trumps sleek ptoduction: “Malaysia to UK on a Honda C90, the movie by Ed March”

MAKE A VIDEO: Projects with a video pitch vs. straight imagery and text are the more likely to be successfully funded. As an example, take a look at “Expediton Denali,” a successful big-goal project for a meaningful cause.

SET A REASONABLE GOAL: Projects below $10,000 are the most successfully funded.

BUILD A DEVELOPMENT AND LAUNCH SCHEDULE: Determine your timeline. Plan an extra week of pre-launch lead-time for the mandatory Kickstarter review.

MAKE A MEANINGFUL PRIZE AFFORDABLE: Budget-conscious climbers, skiers and trekkers want tp help, but you need to offer a worthwhile reward at an affordable donation level (hint: if a video is offered, consider the $15-$25 range).

CONTRIBUTE TO KICKSTARTER: Donate to a few projects that catch your eye. It’s good karma and you’ll understand how the process works.

GET HELP: Here’s a link to guide your efforts: kickstarter.com/help/school#making_your_video

Pete Takeda is a Boulder-based climber and writer.