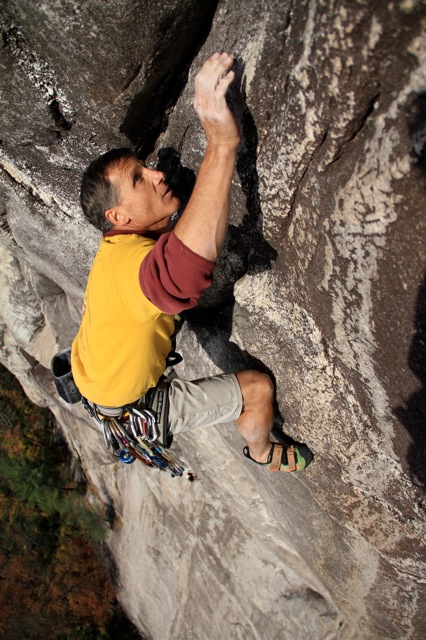 When living in North Carolina nearly a decade ago, I remember waking up in the back of my buddy’s truck and walking out with him to the base of Whiteside Mountain. We followed our way down the trail as thick clouds broke apart in the early morning sun.  At the base and looking up, the wall was huge – it’s the tallest, toughest cliff to climb in the Southeast. The plan for the day was to climb on the well-traveled right side of the southeast face. This meant we had to traverse past the Headwall, which had numerous grade IV 5.11 to 5.12 (or A4) scary, runout routes. All these years later, I still dream to have what it takes to do even one of the Headwall routes. Many of them are the work of Arno Ilgner, a climber since the ‘70s, who, in addition to having beefy forearms and precise footwork has used his own philosophical approach to take on these risky lines.

Ilgner’s written two books on mental strength training for climbers: The Rock Warrior’s Way, $18.95 published in 2003, and Espresso Lessons From The Rock Warrior’s Way, $19.95 published in 2009, which builds on the content in the first book. His books focus on intelligent risk taking but the theories can extend through life. These days, he teaches mental strength clinics full time.

Recently, I caught up with Arno and we setup a time for an interview. He’s not the tallest man, but he stands tall, has slightly bowed eyebrows and keeps sharp eye contact.

Tell me about traveling and teaching clinics?

Mid March I’m going to Mexico for a climbing festival, then the Red Rock Rendezvous [March 30th to April 1]. This is my work. I don’t have another job. All my time is devoted to teaching or giving presentations or working on projects. I’m currently working on a video for exercises that are taught at various clinics and camps. I have some recurring students but most are new. I’m [doing] a 2-week tour to an area, contact gyms, and scheduling clinics. Usually the clinics are open enrollment as opposed to being hired by a university. Being open enrollment can make the cash flow difficult if the clinics don’t fill. Therefore it’s important to work with gyms that truly want to host the training. I’ve contacted plenty of gyms that say “no” to hosting and I don’t convince them to change their minds.

How big are the clinics?

If I’m teaching without an assistant, it’s one instructor to six students.

What are some of the countries you’ve visited for the clinics?

Tell me about what you teach in the clinics.

One of the main points is taking appropriate risks. Ninety nine percent of climbers don’t make appropriate risk decisions. They make decisions based on intellectual knowledge versus experience knowledge. In other words, they only use their intellect to assess risk. We teach the importance of actually experiencing falling. You truly know something when you’ve experienced it.

First, people that start climbing learn how to move up the rock, belay, and lead. At some point they hit a plateau. They progress until their natural talent has maxed out. They’ve done everything they can to keep from falling. Eventually, though, they’ll fall. Yet they won’t be able to respond to the fall effectively because they have no falling experience. The belayer also won’t have experience to give a proper cushioned catch. Essentially they’re experiencing the full consequence of the fall without knowing how to deal with it. Climber and belayer will react by tensing, shortroping the climber and slamming him into the rock.

By practicing falling you’ll understand what is a safe fall based on past falling experience. We begin fall practice on top rope and progress gradually. This is how the learning process works: add a little stress and process it into comfort. Then add more stress. You’re gaining actual experience of what it feels like to fall.

Where did you come up with the idea of intellectual risk management? Was it while establishing routes at, Whitesides?

I would say the Warrior’s Way isn’t intellectual, but rather experiential risk management. On Whitesides I was unconscious of the mental process going on in my mind. I didn’t really know why I was able to do some of the routes. My friends said I could deal with fear. That’s what spurred my interest to investigate it further. I talked with Peter Croft and John Bachar. I asked them how they were able to climb bold routes. I wanted to see if they could tell me what they were doing that helped them deal with fears that most climbers experienced. They said they didn’t know. Bachar would say stuff like “squirrels run up and down the rock, why should we be any different?”

Bachar was taking the metaphor and applying it to his climbing.  I began studying mental training material and digging into it. I wanted to put more consciousness to it. I wanted to create a method for climbers to apply to their climbing so they could perform as well as possible.

You’ve said that you don’t manage fear as well as others. Who are some of the people – southern climbers — who deal with fear well?

I think I deal with fear just fine but I’m not exceptional. My friend In Atlanta, Shannon Stegg, has done a lot of bold ascents on ice and rock. He’s also taken more falls than most climbers I know, on ice too. I’ve never really talked with him about why he’s able to deal with fear well. He seems to have a genuine love for climbing. Though I don’t think his motivation is always as pure as it could be. Part of his motivation could be an escape mechanism for stresses in his life, as it is for most of us.

In your books you write about analytical versus intuitive tendencies. Intuitive climbers under-think and tend to rush through stress. Analytical climbers over-think and tend to stall out in stress. A strictly intuitive approach can lead to dangerous falls. That’s how Shannon is. Climbers like that can be seen as dealing with fear well because they don’t dwell on thoughts and doubts. From an outside perspective it looks like they’re engaging well. But, really, they’re rushing to escape the stress. They rush to get through the stress to get to the next rest stance.

An analytic climber thinks things through?

Yes, more than intuitive climbers. I tend to be like Shannon too. That’s helped me on routes at Whitesides. However, I need to build up my analytic by stopping to think risks through and make sure they are appropriate.

The pump clock is ticking, right? We’ve all experienced that. Think about that – when the pump clock is ticking it means you’re in a stressful situation. The mind doesn’t like stress and it will look for ways to avoid that stress. As I’ve said, for an intuitive climber, the mind wants to rush through the stress to a place of comfort. You might be running it out and not be able to make it through and fall. The analytic climber is opposite. The mind wants to be in that place of comfort so it seeks out the comfort of the stance where you currently are; the comfort of the rest stance. Our minds are constantly motivated by where we’re going to be comfortable.

For many climbers the goal is the top. The secondary goal is to take appropriate risks. The better goal is to be sure you’re taking an appropriate risk. It’s better to go through the risk assessment process at stances where you have protection and get off the route if it’s not appropriate. One of the worst things that can occur is for a climber to commit without doing proper risk assessment, hoping things turn out well, and succeed in making it to the next stance. They learn that that is an appropriate way to engage. Yet one day it won’t work and they’ll take a dangerous fall. Then you’ll injure yourself or worse. Instead of being focused on learning their motivation is that any means justify the end so to speak.

If you become aware of the kind of thinking you’re doing – like let’s hurry up and get this done and get this checked off my list — then your mental process is distracting your attention from taking appropriate risks.

The foundation needs to be learning based. It needs to be an appropriate risk. Otherwise you increase the chance of injury or worse.

Has your ego ever gotten you in trouble while climbing?

Great question [laughs]. When we’re younger we have plenty of ego. Fortunately I have not been injured in my climbing career. My ego got me in more trouble off the climb than on the climb.

In Wyoming, though, a local climber, Pat, put up a first ascent called Modern Problems. It was in the 80s when sport climbing was just beginning and had a lot of bolts on it. It was moderately difficult. I did an ascent of it and also put up a climb next to it without bolts called Modern Solutions. Ego getting in there to show that I was a better climber than Pat because of the type of protection each route had and how I named the route. It took awhile to regain Pat’s friendship [laughing].

I’ve taken plenty of longer, somewhat more dangerous falls but I don’t think it was motivated by ego. At least I can’t think of any at the moment.

One thing I really enjoy doing is first ascents. I think part of that is really ego driven. We’re pushing into new ground. There’s a certain amount of motivation [that] comes from the ego. There’s something about first ascents that is really appealing to me. No one has been there before.

Whatever ego may be in doing first ascent, I really do love climbing. The first day I was exposed to climbing in 1973 in high school at the local limestone crag in Tennessee I just knew I loved it. The position you get into, the exposure, being high off the ground, working with the ropes. It’s difficult to explain it; it just resonated with me and I knew I loved that activity. That’s been persistent throughout my climbing career.

Either through the guide services I work with or gyms that host the training. The best way is to sign up for our eList at warriorsway.com so you get free lessons and updates on training. Some of the guide services I work with are: New River Mountain Guides in West Virginia, Fox Mountain Guides in North Carolina, and the American Alpine Institute in Washington. That’s just a few. We’ll schedule the camps and clinics and then get the word out.