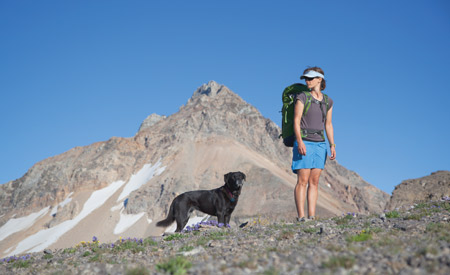 The Road: Discovering Yourself in the Teton Backcountry

We were in the thick of the pine forest, amidst trees bleeding a sweet-smelling, sticky sap when the trail pitched decidedly upward. Megan turned to me with a pensive look that, now that I think back on it was most likely laced with disdain.

We’d been hiking for two-and-a-half hours and had far, far longer to go. Our trail had taken us from a packed parking lot at Jenny Lake in Wyoming’s Grand Teton National Park, on to a crowded loop around the lake, through aspen groves and, now, into the forest.

Since we had left her truck, I’d bombarded Megan with questions, deferring to her expertise as a newly minted NOLS graduate (Alaska, mountaineering) and deprecating my lack of experience (I was hiking in tennis shoes). I wanted to know how long until we reached tree line? What would our campsite look like? Was her tent tough to set up? Did she like those burly Limmer hiking boots? Were they expensive? How much had her NOLS course cost? Did she want to move to Alaska? Was she excited about college? I was nervous about college, not sure I picked the right school, and did she think that was normal? Why was she being so quiet?

Megan studied me. My stomach summersaulted and my heart beat a little louder in my chest. My mind swirled with denial. Friends, I whispered to myself. We’re friends.

Finally Megan spoke, “I forgot the fuel. For the stove.”

“Should we go back and get it?”

“No way. If we do that, we won’t make camp until after dark. We’ll be OK. I had it a lot worse in Alaska. You have no idea.”

About that, Megan was right. I was 17 years old and heading into the mountains for the first time, anxious about the blisters growing on my heels and exhilarated by each breath of high mountain air. My thighs throbbed from the repetition of climbing with 30 pounds on my back.

I had high expectations for our trip. I hoped it would change everything. At home in Colorado Springs, my life was fraught from living with two unhappy parents, one an alcoholic and the other an enabler, who never seemed to have enough money or love or trust to move beyond the tension that had become our weighty normal. I was desperate to be someone else.

I’d latched onto Megan at the beginning of the summer when we both got jobs at a deli in a health food store. In high school, we’d been on the same soccer team, though she’d been the captain while I rode the bench. We both wore Birkenstocks and baggy jeans and declared popularity was overrated. But she had been voted homecoming queen, while I hung out with the outsider crowd. I’d long wanted to be Megan’s friend—actually, I wanted to be Megan—and the deli job finally thrust us together, particularly once our deli co-workers began inviting us to their parties.

About those co-workers. They were all women, and most of them were gay. They were convinced Megan was gay, too, which she adamantly denied. In late June, they invited us to a summer solstice drumming party in Manitou Springs, a hippie outpost at the base of Pikes Peak. The party started in an incense-infused apartment bedecked with gauzy tapestries and lots of potted plants. The small living room was packed with beautiful women with long hair and large eyes and smooth voices who passed around several joints.

Then we migrated outside and up a nearby trail to an open meadow. The moon rose and musical instruments appeared. Bongo drums. Guitars. A ukulele. Someone rolled a cigarette and handed it to me. Someone passed around a bag of hallucinogenic mushrooms, and I ate a handful. As the night went on, the partygoers tried to seduce Megan. They’d caress her shoulders, and she would shrug away their hands. They’d ask her to dance, and she’d scowl and shake her head. I said, “I’ll dance.” But they ignored me.

“Rachel, dear,” one of them said. “You are straight. The straightest girl here.” Somewhere, in the midst of their condescending smiles and my drug-induced haze I had an epiphany: I was invited to the party as bait. These gals were infatuated with Megan and knew she wouldn’t have come without a chaperone, which is why they included me.

The realization stung a little. Then Megan tore me away from the festivities, and we wrapped up the summer solstice under fluorescent lights at an IHOP, chasing away our high with burnt coffee.

“All those women wanted you,” I said.

“I might be… I’ve always been a little curious.”

Megan’s stare bored a hole in me. “Rachel,” she said. “You’re as straight as they come.”

hat was the most personal conversation I ever had with Megan, which isn’t saying much. That we ended up together in the Tetons eight weeks later was a fluke. Our soccer coach volunteered with the World Wildlife Federation each summer and invited Megan and me to join her and a handful of others for a week of camping and counting grizzly bears in Yellowstone. We’d decided to add on this Teton backpacking trip because Megan wanted to show off what she learned in Alaska and I wanted to be Megan.

Now, we were too far in to our hike to retrieve the forgotten fuel. We were screwed. We hadn’t brought a water pump because Megan said it was extra weight and we’d just boil water. Our dinner was to be burritos made with dehydrated beans. Breakfasts would be oatmeal. Even lunch—soup packets—required cooking. I didn’t know squat about backpacking, but I knew that we couldn’t last for three days—our planned duration—with cold tortillas and cheese. Still I didn’t dare get mad about the mishap. In my mind, Megan was omniscient, infallible, practically a god. She did not apologize for forgetting the fuel.

We trudged on in silence. And up. And on. I had the distinct sensation that Megan was angry. I tried to ignore the insecurity brewing in my gut, but that would have been tantamount to ignoring the way the aspen leaves shivered on their branches in the breezy air or the way the pine boughs clustered high above us and blocked the sun from the trail. Impossible. In the silence I could not escape the obvious: I was not Megan and could not be, which left me with the uncomfortable mystery of trying to understand who I actually was. Finally, the forest spit us out into a cirque surrounded by jagged peaks and a flawless sky. The twilight beauty had the immediate effect of distracting me from my troubled mind.

As soon as we reached our camp spot, I dropped my pack, shed my clothes and ran into the impossibly cold lake, diving under the surface. The cold assaulted me, and I yelped and bolted back to the firm ground. I grinned so hard my cheeks hurt. Megan barely smiled. We pitched the tent, rolled some cheese into a tortilla, swigged the remaining water in our bottles, and went to bed before the sun fully set. The next morning, we agreed we couldn’t stay the second night without fuel. So we had another tortilla for breakfast and decided to go on a short hike to the top of a nearby ridge before packing up and heading down.

There was no trail, just a broad hill. The ground absorbed my weight and bounced a little underfoot. There was still more silence than talking, but it didn’t disturb me. It couldn’t. I was too distracted by the shark-tooth peaks, the thin air, the way my face felt as if it were the sun itself. From the ridge, I saw that the Tetons spread for miles in all directions. We were mere specks in the middle of their fold. I felt wonderfully small and insignificant, and I saw that Megan was, too.

We returned to our tent, packed up, hiked down, and headed to Yellowstone.

In the park, we we met up with our soccer coach, Pam, who had been the catalyst for our trip. With her were friends who, like us, planned to volunteer for the World Wildlife Fund for a week of environmental field work. Among them were biologists, writers, and other earnest adults, people who had camp kits stocked with extra stove fuel, a sponge to wash dirty dishes, and biodegradable soap. For the next week, we watched grizzly bears stomp the frost-covered moss and unearth enormous clumps of earth in search of tasty grubs. The adults took care of us like the not-kids, not-grown ups we were.

At the end of the week, Megan and I drove home in 13 hours without stopping and barely speaking. Her spell over me had broken, replaced by an even stronger one cast by the Tetons. It was a relief to feel such kinship with mountains I hadn’t even known existed two weeks earlier. Mountains, I decided, are more consistent than people. Less confused. By the time we rolled into Colorado Springs on a four-lane highway, it was as if the Wyoming dirt had worked its way through my skin, past my muscles and bones, and into my marrow.

Several years later, I would learn that Megan came out and was living with her girlfriend in the Pacific Northwest. I heard the news from my home in Jackson Hole, where I moved after college. And I decided one summer day to hike by myself up to the spot where she and I’d camped. When I reached that broad meadow, I stripped naked and jumped into the lake. The cold sucked the air from my lungs and I rushed back to shore and hopped around until I dried. And I thought of Megan then, hoping that wherever she was, she felt as at home as I did. I hoped she was smiling.

–Rachel Walker lives and writes in Boulder, Colorado, but would move to the Tetons tomorrow if the opportunity arose. See more of her work at spawnandsurvive.com.