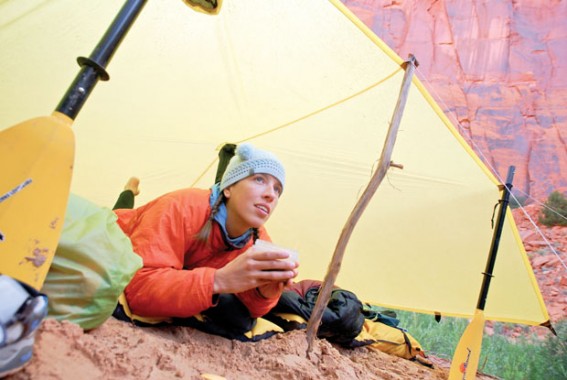 Minimalism has become standard on the trail, but is it always the best idea? We asked our readers whether it was safer to go fast-and-light or über-prepared. Two-thirds of you feel best when you carry less. To argue the fine points of these dueling philosophies we enlisted the opinions of fast-packing Alaskan Matt Hage and EO assistant editor and guide Chris Kassar.

Light-and-fast has become a cliché. The now ubiquitous phrase insinuates that one comes with the other—if you go light, you always have to go fast. Get out there and get ‘er done. No time for flower sniffin’. Go blast that 50-mile trail in a day so you can tick it off the list and do another one on Sunday. Sure, I’ve partaken in my share of peak-bagging weekends, but there’s another side to lightweight backpacking.

On the trail, I’m usually going light and slow. Just because I’m carrying a 12-pound pack, doesn’t mean I have to charge full speed from the trailhead. Breaking the gravity of life and getting into the woods took a lot of planning, coordinating and effort. Why be in a hurry to get back to the pavement? While you’re on your way to camp one, there’s side canyons to explore, creeks to swim and critters to watch. This is easy to do with that wispy ten pound load on your back but not so much hauling that 45-pound behemoth on a death march. Going light allows you to actually enjoy the trip.

Putting together a 10-pound backpacking kit is easy these days. Small, garage operations have really pushed the envelope of weight and durability when it comes to outdoor gear. And even the more mainstream companies have upped their lightweight R&D. Cascade Designs released a posh, 10-ounce Therm-A-Rest that is just as comfortable as the old three-pound models. Guess cold chillin’ at camp ‘lightweight’ isn’t as uncomfortable as you may have thought.

Contrary to what you might have heard, going light isn’t about the gear. It’s actually all about deciding what you can do without. I mean, do we go on a four-day backpacking trip to play with gadgets? The less in your pack, the less time you spend loosing, finding, packing and unpacking stuff. Lightening your load helps you focus on why you’re getting out in the first place.

Now I’m going to blow your mind. Going light is also safer. Are you working up towards that pass all afternoon when it starts snowing on you a couple hours before dark? An ultralight 8-pound kit allows you to quickly motor up and over, descending to a more protected spot for camp. Rockfall on a big scree slope? Move more quickly. Altitude problems? Get down faster. Going to strangle your partner? Get back to the car faster. Our backpacking first aid kit weighs 2 ounces and will stop most bleeding, help stabilize a broken bone and deal with blisters. The grim fact is that if you need more than that, you’re also going to need professional medical help—and that’s when you need to go really fast.

Minimalism definitely seems to be trendy these days—barefoot running, nude backpacking, light-and-fast first ascents. However, unless you’re Bear Grylls and can do things like fashion a wetsuit from a seal carcass, there are certain items you really do need to have with you.

Perhaps, it’s because I’ve been a guide for too long and I’ve seen how quickly things can change. Maybe I’ve been involved in too many rescues that could have been prevented with just a little planning. Most likely, it’s my respect for nature. I’m just another animal moving through and experiencing it, and I better be able to provide for myself just like every other animal does.

I’m not contending that you have to carry 100 pounds of useless crap on a day hike or that using “light” gear isn’t a smart way to make things more enjoyable. Rather, I am saying you ought to be prepared for what might happen.

All too often, I’ll be out hiking a 14er in winter during a crazy blizzard, complete with sustained gusts of 70 miles an hour when some dude wearing only tights, tennies and a t-shirt jogs by me. My first thought is usually: “We know who’s going to be digging through her pack to save his ass in an hour.” And, invariably I become the savior with spare gloves, jackets, Microspikes, food. Sadly, this is an increasing occurrence. Are people getting dumber or is there a false sense of security because of the increased scarcity of truly remote places?

Whether you are day hiking, trail running, backpacking or going on an expedition, there is a level of responsibility that you have by heading off pavement and into nature. Think of it as the backcountry user code: plan for the best, prepare for the worst. This doesn’t mean you should dwell on doomsday scenarios, but you should be ready for what nature might throw your way.

No matter what your take on this issue or what you decide to pack, none of it is as important as using your noggin and the common sense that hopefully resides inside. Be sure not to leave those at home.

“How you do it depends on genes and psychology. OCD+fearful=über-prepared.

Get ready for our next question,
dear readers: Climbing—to gym or not to gym? Let us know and butt heads at ElevationOutdoors.com