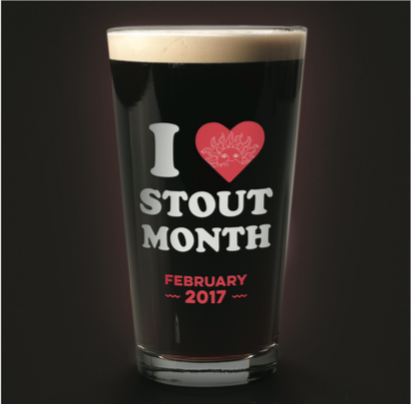 The Return of Stout Month

It’s here. The one month out of the year dedicated to malty, dark, rich, roasty, and damn good cold weather-drinking beers. While the leaders of the Stout Month circus continue to be the Colorado-based Mountain Sun Brewery group, the state is also home to a numerous bunch of stout-loving breweries that are serving up their very best stouts this February. Here’s a look a six stouts to seek out this month.

I get it. There are so many amazing stouts being released this month at Mountain Sun locations all across the Front Range, but the Girl Scout Stout’s minty, and rich chocolate flavors continue to bring all of the boys and girls to the bar. At 5.9 percent ABV, this stout is still fairly sessionable and a delightful way to cleanse your palate as you taste your way through the billion other stouts on Mountain Sun’s stout month menu. mountainsunpub.com

This American Stout holds the high honors of being awarded a silver medal at the 2015 Great American Beer Festival, and a silver medal at the 2014 US Open Beer Championship, so you know it’s good. Balanced and clean brews define this Berthoud brewery’s beer line-up, and the Night Watchman isn’t an exception. The Night Watchman’s roasty flavor is exactly what you want in a big, dark beer, but is complimented nicely with dark chocolate and coffee notes. citystarbrewing.com

If you’ve had the pleasure of drinking this monster of a stout and can still remember the experience, then good on ya. Oskar Blues’ Ten Fidy Imperial Stout has been a staple in the brewery’s line-up for years, but it wasn’t until they started barrel-aging it in bourbon barrels that the beer really started to develop a cult-like following. Espresso, chocolate, caramel, vanilla, and oaky notes are all flavors you can expect to find in this whopper of a beer that weighs in at 12.9 percent ABV. If you can find one, grab one of the 19.2 ounce cans of the Barrel Aged Ten Fidy that the brewery released in the fall of 2016, or pay a visit to the Oskar Blues tasting room where you fill a crowler (or five) of this beauty to take home with you. oskarblues.com

If coffee stouts are your jam, add Boulder Beer Company’s soon-to-be released Irish Blessing Oak-Aged Coffee Stout to your list of stouts to try this month. Brewed in collaboration with Boulder’s OZO Coffee, the final product is a dark stout made with black and chocolate malts, which along with the roasted coffee flavor, give this beer it’s rich flavor. Stout lovers can grab a pint at craft beer bars throughout Colorado beginning in mid February, or at the beer’s release party at the Boulder Beer pub on February 17. boulderbeer.com

It seems like everything this Golden-based brewery touches turns to gold, but it’s not just the lighter styles of beer that Cannonball Creek fans are going crazy for. This February will mark the return of the brewery’s beloved Imperial Chocolate Stout—a creamy and almond-forward dark ale originally created to commemorate the brewery’s anniversary. Stay tuned to the Cannonball Creek website for details on when this speciality brew is pouring. cannonballcreekbrewing.com

One of the more unique stouts on the market, Odell Brewing Company’s Jolly Russian is a huge Russian Imperial Stout aged in rum barrels. This dark beer is incredibly flavorful, with notes of coffee, cocoa, and spiced molasses shining through. At 13.3 percent ABV, this beer will getcha, but it’s so worth it. Pick up a 12 ounce bottle or a fresh pour on draft at Odell’s Fort Collin’s brewery. odellbrewing.com