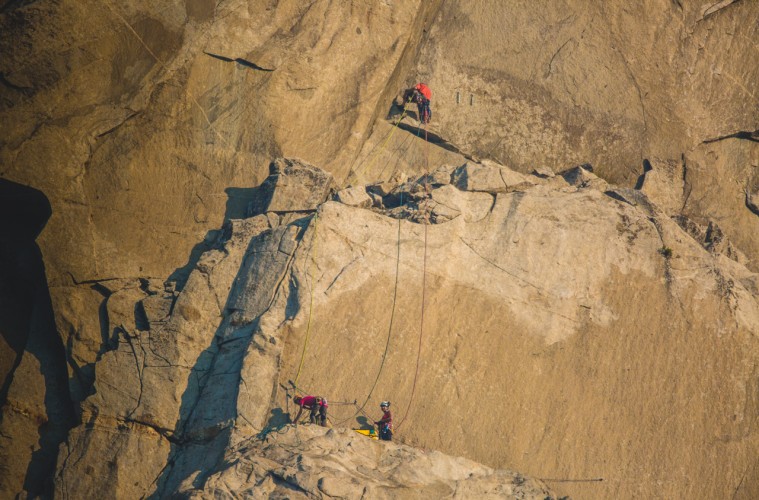 On September 12th, I topped out on The Nose in Yosemite National Park with professional climber Hans Florine. The Nose is the longest continual rock climb on the planet, ascending the 3,000- foot prow of El Capitan, a massive granite monolith. It was Florine’s record-setting 100th ascent. It was my first big wall climb.

Big wall climbing is a head game of epic proportions. During our three-day ascent of El Capitan, every move I made, from where I clipped in at the anchor point, to how I rearranged my harness to go to the bathroom, held the implicit danger of death by plummet. I trusted Hans. I didn’t trust myself. The effect was serious mental fatigue. In fact, I found the mental demands even more exhausting than the physical.

But “the moment”—the one where I feared I’d made the biggest mistake of my life—happened during a stint of relative relaxation. At sunset on the first day, our team of three huddled alongside our supplies on a 4-foot by 8-foot ledge. This was to be our “campsite” for the night. Hans pulled three cans of soup from the haul bag for dinner. We ate them cold.

Back in the horizontal world, soup had seemed satisfactory, comforting even, when we’d originally planned our meals. But after 13 hours of climbing, one can of soup felt woefully inadequate. I checked the nutritional information on the back of the can: 220 calories. That’s when I lost it. “That’s less than a Clif Bar,” I whimpered, fighting back tears.

Meanwhile, inside the haul bag sat another 1.5 days worth of modest portions of food for three people. I spent the rest of the night in the fetal position—fading in and out of dreams that I’d eaten every last bit of food as the others slept.      —Jayme Moye

Hans Florine’s story, On The Nose: A Lifelong Obsession with Yosemite’s Most Iconic Big Wall Climb, will be published by Falcon in July 2016.