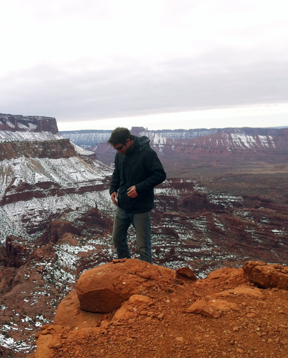 REI’s Edgewood Travel Coat – for casual outings and beyond

I like climbing in the cold. The way I see it, you can always put more layers on when it’s cold out, but can never seem to take enough off when it’s hot.

Over several weeks this winter I traveled to the Fisher Towers in Utah. The gargoyle-esque towers have drawn me there for 15 years and most all visits have been in winter. Looking back, I spent many nights there cold, especially in the early days when I didn’t have the right outdoor equipment.

Climbing rocks in technical outerwear has its place, like long free climbs in Eldo, for example. The Fishers is not one of those places. The course sandstone rubs holes into nearly everything like sandpaper. Compounding the issue, the towers are covered in mud – it’s fun climbing there, really – which rubs into clothes, permanently staining them red.

I took the REI Edgewood Travel Coat up the tallest tower of the Fisher Towers group via the steep south face of the 1,000 foot Titan. I bivied in it as storms threatened overhead.

The best use for this coat is for casual use, like walking around New York City in winter. I could see my dad wearing this as he’s out on his crabbing boat in Puget Sound. I took it hiking loads from base camp to the tower and up the wall. Several trips to ferry gear to the base were required, totaling about twelve miles of steep hiking. The Author climbing in the Edgewood

Temperatures hovered around freezing all day with nighttime temps plummeting to below zero. I brought many layers up the wall to keep warm, the Edgewood as the outermost layer.

The Edgewood’s two-layer polyester, waterproof, breathable and durable shell is lined with fleece and mesh; the outside has a rough finish. It’s two pounds – not exactly lightweight and it doesn’t compress very well — and has a zip-off hood, two chest, two hand, and three internal pockets. This meant I had plenty of places to stuff little crucial items – like the headlamp, gloves, block of cheese, and iPhone. Winds never reached 60 miles per hour, which is the wind rating on the Edgewood, but what wind — and it definitely blew — we experienced did not penetrate the shell.

I liked the straight cuffs on the Edgewood. The hood fit over my helmet but not as snuggly as, say, an ice climbing jacket, but it did stay in place. Technically, this shell isn’t lined with insulation but the heavy fabric helped keep the warmth in.

In the end, we succeeded and the Edgewood made it to the summit and back without damage. This might be a first – most times I review gear I damage it at least a little. Like tearing a hole in something when a thorn brushes my side, shredding a light pack by dragging it up El Cap, or overstuffing a pack until the zippers bust.  Take the “indestructible” inflatable sleeping pad I brought up on the wall for the night – it popped so I got to spend the night directly on the cold, hard ledge. Finally, my partner spilled ramen in the bivy, so I got to sleep with my head in a pile of soup. The Edgewood kept me dry. The author and Adam “Pappy” Papilion on the bivi ledge, about 800 feet up the Titan.