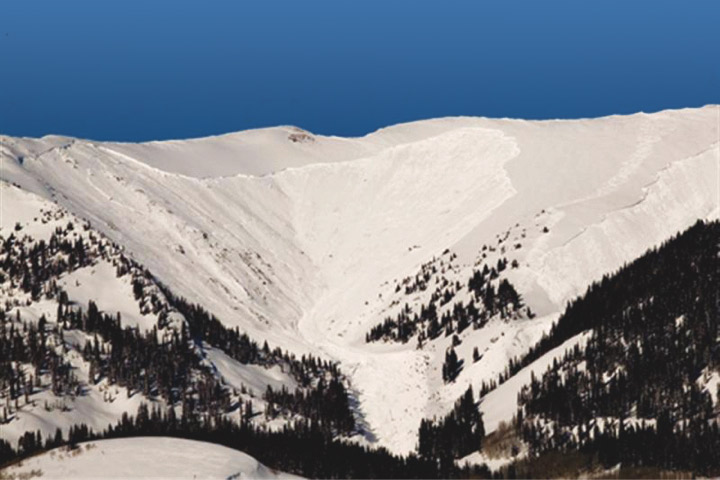 Learn to Understand the Language of Avalanche Bulletins

Colorado leads the nation in lots of good stuff—fittest population and most 14ers to name just two categories—but we’re also tops in avalanche deaths. Part of that is because all these fit people are constantly skiing off the numerous 14ers. A good chunk of that dubious honor, though, is due to our bitchy snowpack. Cold temps, relatively little snow, and plenty of wind make for lots of “avalanche problems.”

“Avalanche problems” is just a simplified term that takes categories of avalanches that might occur and helps us translate them into specific risk-management strategies we can use in the backcountry to minimize our exposure to danger. The Colorado Avalanche Information Center (CAIC) issues daily bulletins that highlight what problem(s) we’re dealing with and then coaches us on what risk-management strategies we can use. Simple, right? Yes and no. Read on.

Several years ago avalanche centers from across Canada, the U.S., and New Zealand began discussing the effectiveness of their public messaging. Academics, forecasters and guides hoped to streamline the language and layout of avalanche bulletins, so when you and I travel to a different venue we find consistent language across zones and borders. When forecasters in Revelstoke warn us of a “persistent slab” problem, it will mean the same thing down on Red Mountain Pass as it does the next state over in the Wasatch.

After a lot of back-and-forth, a bunch of thoughtful discussion, and a bit of arguing, North American and Kiwi forecasters agreed on categorizaions for eight avalanche types. We Americans added a ninth—glide avalanches—in 2012. Building on these types, the “avalanche problem” incorporates factors that include spatial distribution, likelihood and size of potential slides. Now, we at least agree on what we need to talk about in bulletins.

Once the nine problems were adopted, avy centers shared feedback on how these were to be described and what risk-management strategies they could recommended for each. Over the past couple years, the messaging within avy bulletins has grown more consistent, making it easier for backcountry recreationalists to grow accustomed to interpreting the problems and, most importantly, to develop habitual risk-management strategies for each of them.

Writing in The Avalanche Review in 2012, co-authors Brian Lazar, Ethan Greene (both of the CAIC) and Karl Birkeland (of the National Avalanche Center) explained, “The flavor of the avalanches we expect to encounter can be more influential in our risk-management practices than a given danger or stability rating.”

By this they meant that rather than focus on how sketchy conditions are, we could focus on what kind of sketchy they are. Are we dealing with two feet of new snow overnight or newly drifted snow from a couple windy days? Recall two seasons ago, the year of the Sheep Creek tragedy on Loveland Pass in Colorado. The CAIC had identified one of the avalanche problems as a “deep persistent slab” for several days, which led into several weeks. While the danger ratings (often moderate to considerable) weren’t more elevated than other days of that year or previous years, the avalanche problem (that “deep persistent slab”) signifies an entirely different problem than, say, a “storm slab.”

Next time you’re online, visit the CAIC site and click on Forecasts. In the drop-down menu you’ll notice a Help tab. Click that, and you get a page describing all nine of the avalanche problems and some corresponding strategies to minimize your risk. If you read the storm slab problem and compare it to the deep persistent slab, you’ll realize you’re dealing with a different beast entirely, even though the danger rating might be the same on a given day.

Deep persistent slabs are “very destructive and dangerous … particularly difficult to forecast for and manage … destructive and deadly events that can take months to stabilize.” Storm slabs, on the other hand: “… typically last between a few hours and a few days … Storm slabs are most dangerous on slopes with terrain traps, such as timber, gullies, over cliffs, or terrain features that make it difficult for a rider to escape off the side.”

While either avalanche problem can be lethal, the deep slab problem lasts longer, is less predictable and is always more destructive.Storm slabs demand caution, too, but can be more predictable and don’t generally carry the same risk, especially when one is careful to avoid terrain traps.

Now that you’re looking for one of those nine categories, you’ll grow accustomed to the characteristics of each: how long they last, where you’ll find them in the terrain, what sorts of avalanches they might produce. Avalanche bulletins from the Southern Alps of New Zealand to the Chugach in Alaska will describe the problems similarly, using the same language and similar graphic icons to highlight each.

Avalanche centers will coach you on locating and identifying each avalanche problem (what aspects, what elevation, what terrain features), and they’ll also mention specific risk-management strategies to help you stay out of trouble. While you’re browsing the CAIC’s Help page under the Forecasts section, read your avalanche problem of the day, and notice the final bit of the description: what to do to minimize your risk and exposure. Now, you have hit paydirt!

From the storm slab section: “You can reduce your risk from Storm Slabs by waiting a day or two after a storm before venturing into steep terrain.” If you’re dealing with a deep persistent slab, the problem gets trickier. As these are difficult to forecast and predict, your risk-management strategy becomes avoiding these slopes altogether. Doesn’t sound too fun, eh? The best in the business get surprised by these, though, so if you’re in the game for the long haul, outright avoidance might indeed be the best call.

Avalanche problems, you’ve got ‘em, so now what? You’re reading the bulletin closely for information on the problems themselves and what risk-management strategies you can take. Check.

I hope you have a trusted crew with which to slay the gnar. If not, find some reliable, smart, reasonable buddies to join you in the backcountry. Before you step in at the trailhead, though, think about your planning and prep.

“You need a repeatable process,” says the CAIC’s Brian Lazar. “Something you do every time you plan a tour.”

Bruce Tremper, of the Utah Avalanche Center, echoed Lazar’s sentiments in a recent piece in Powder: “We can’t engineer all the uncertainty and variability out of the medium of snow and weather; there’s no way we can make that risk zero,” he said. “But we can get very close by practicing a rigorous system.”

If you don’t have a system or process for your backcountry planning, then consider taking an AIARE 1 course this winter, offered by various providers in Colorado including Kling Mountain Guides, the Colorado Mountain School, and Aspen Expeditions, among others. Check avtraining.org for a list of providers throughout the U.S.

In the meantime, read the bulletin, every day. Focus on the avalanche problem(s) and relate them directly to risk-management strategies. Get in the habit, even on days when you’re not skiing. You’ll soon internalize that part of the puzzle and you’ll be safer for it.

Gear That Could Save Your Life

The bottom line in avalanche safety is avoidance, but we all make mistakes. Just like the air bags in your car, avy gear hedges your bets in case you throw a wobbler and end up on the spin cycle in the Jonny-Gnar Couloir. Here are a few sexy pieces of snow-safety gear you might want to consider for the upcoming season.

2. Ortovox Kodiak 3.1
Hardened 6000-series aluminum in the shaft and blade, a rubberized grip, D-ring handle, and the ability to use it in “hoe” mode—the 790-gram Ortovox Kodiak 3.1 is a great shovel. How great? I paid full retail for the damn thing on my ski exam in Canada. Why? Part of the ski exam entails a crevasse-rescue drill, so one must dig a ski anchor before hauling off of it. A friend on the exam had a Kodiak and was crushing with it, saving minutes on his digs. I took the bait… and you might want to as well. $100; ortovox.com

3. BCA Tracker 3
The Tracker 3 builds upon the reliable, intuitive Tracker 2 beacon, adding a signal-suppression function, while shaving weight (215 grams, 40 less than the Tracker 2) and size (it’s now the thinnest multi-antenna beacon in the world). You’ll never get the stand-and-wait-and-lose-valuable-time “hand icon” so commonly seen on other beacons, too, due to BCA’s commitment to keeping the Tracker 3 simple and focused. $335; backcountryaccess.com

4. Alpine Threadworks Ski Guide Rescue Tarp
A rescue sled? Damn staright. I hope to never use it, but I’ll be psyched if I have to. Handmade in Calgary, this rescue tarp sled has pre-sewn haul points, as well as siliconized nylon at the perimeter, so you can burrito-wrap a patient easily. Marry it with an inflated Exped pad on the inside, and you can move somebody to an LZ, the hut, a snowcave, or down to the car for tall boys. If you’re backcountry skiing, you should have a plan for an evac. You don’t? Well, now you do. $241; alpinethreadworks.com

—Rob Coppolillo is an IFMGA-licensed, AMGA-certified mountain guide, and an AIARE instructor.