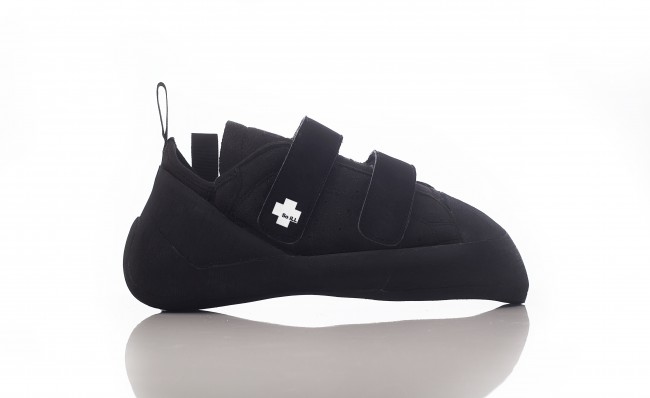 The crew at So iLL definitely live their passion. They make inspired climbing holds, opened and operate one of the coolest gyms in the country, and you should get a look at the climbing shoes they’re designing and building. Until March 31 you can pre-order these phenomenal-looking shoes at a discount through So iLL’s Kickstarter campaign, or wait until June and pay full retail.

They’re offering a range of shoes, from kid models to entry-level to aggressive, downturned shoes geared for senders. No matter the model, though, they all look like no climbing shoe you’ve seen. They draw on vintage track shoes, retro hipster kicks, and even bowling shoes–but seeing is believing.

The rubber–and it always comes down to the rubber–is brand new. Originally developed for Navy SEAL’s, the “Dark Matter” is sticky, but also takes color. You’ll understand when you scroll down. They say the stuff’s sticky and high-performance, so buckle up and get ready. These things could change what’s possible in terms of design.

Browse the So iLL website and check out the design vibe, from their offices to their holds to the rock gym and to the shoes. These guys are on to something.

I had a chance to chat briefly with So iLL owner, Dan Chancellor, via e-mail. He explained, “we have six models available for pre order on Kickstarter.  They range from beginner shoes, to highly advanced (soft and downturned).  It was important for us to keep the beginner shoes high design, and to have beautiful aesthetics like the advanced models. The shoes can look amazing but have to perform.  We have had a series of professional athletes climbing in the shoes during the entire process.  They have pushed us beyond what we thought was possible while marrying both function and fashion.”

Apologies for the brevity, friends and readers … but I’m in the middle of a five-day guiding binge and headed to Vegas Saturday for two weeks of rock climbing–psyched! I wanted to get something posted on So iLL before their Kickstarter campaign ends on the 31st. Consider helping to fund this project–looks totally cool!

And if you’d like to check out a bit more about the shoes: