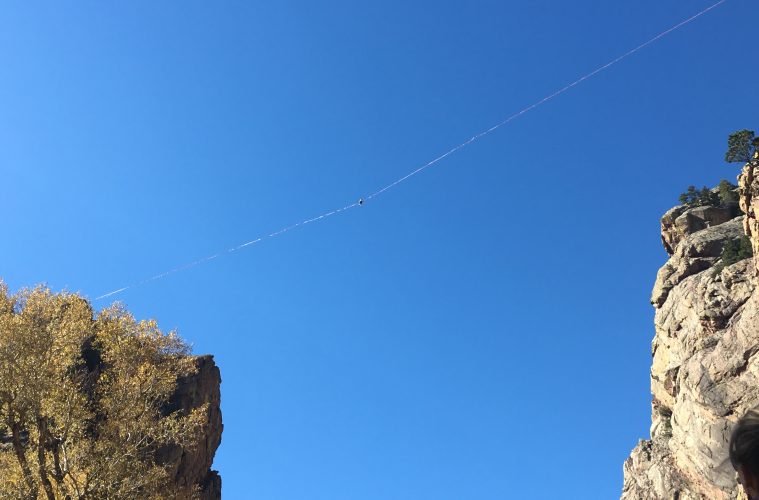 Over 100 spectators filled Eldorado Canyon State Park on Saturday, October 15, to watch a re-creation of the infamous Ivy Baldwin highwire act. Taylor VanAllen, a professional slackliner sponsored by Slackline Industries, became the first person to walk the span between the Bastille and Wind Tower formations since Baldwin’s last walk in 1948. Gusty winds mared VanAllen’s first try at the 560-foot walk. The 24-year-old fell repeatedly—though he never came on to his tether. Each time, he arrested himself on the slackline—as the wind whipped through the canyon. After VanAllen arrived at the Bastille, at the southern end of the slackline, the wind suddenly calmed and he returned for another go. This time, he nearly walked the entire distance, before the wind recommenced and buffeted the athlete. Brands like LaSportiva and Slackline Industries had demo booths, while the Action Committee for Eldorado (a climber’s advocacy group) and Colorado State Parks shared information on the Park and their work.

Proceeds from the event will go towards maintaining and rebuilding trails in “Eldo,” a world-famous destination for rock climbers.