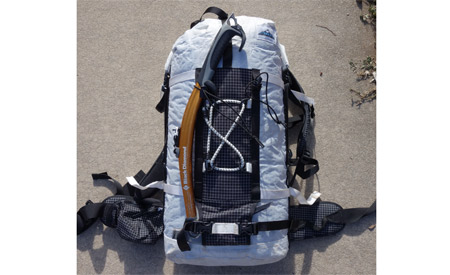 Rob CoppolilloJanuary 11, 2014
Master of None0 Comments 0 Full disclaimer, yes, I did “score” the thing to test/use. That said, I’m going to buy the smaller rock version (Summit Pack, 30L, $148) because I’m thoroughly sold on the fit, fabric, and function. Read on.

Hyperlite builds out of a couple varieties of “Cuben” fabric, essentially a polyester laminate (non-woven) incorporating the strength of Dyneema/Spectra fibers. The resulting textile is waterproof, 50-70 percent lighter than Kevlar and four times stronger. It also doesn’t lose strength through flexing or packing.

I hauled, sketched, chimneyed, and bushwhacked with my Ice Pack (built of 50d Cuben) for the past four months, beating the daylights out of it. I’d originally wanted it for my advanced alpine course this past September, but I’ve continued to use it, even for day-cragging, just to get a feel for it.

Eight hours of spindrift and sitting in the snow on Longs Peak’s Diamond didn’t touch the thing. In fact, the only moisture that entered was because I left the roll-top closure gaping into the skies just as a spindrift bomb hit us–note to users, roll the thing shut, because once inside, the snow/water’s got nowhere to go, as the Cuben’s weatherproof. My fault.

All my hauling, talus surfing, and sitting atop the pack resulted in a single matchhead-sized hole in the l ower body. I didn’t try to damage the thing, but I also didn’t baby the pack as much as I might normally. Good results for the abuse I perpetrated upon it.

Ultralight packs made of funky materials are the rage these days, fair enough. What gets tricky, though, is the function and fit. My last day guiding with the Ice Pack I carried two 60m ropes (an 8.7mm inside and a 9.5mm across the top), eight screws, my harness, a helmet, a liter of water, belay jacket, a half-rack, two pair of crampons (I was checking out the new, awesome, badass, gorgeous Cassin Blade Runners and wanted a backup, just in case), a set of belay gloves, and some food. Comfortable, period.

I spent about 30 seconds bending the two aluminum stays to “customize” the fit when I first got it, but nothing more. Beyond the stays, there’s an amply padded waist belt, four compression straps on the sides (two per) and one “Y” strap over the top. That’s it. No weird diagonal straps, not much to adjust, but somehow the thing rides really, really well. I also carried the pack on a couple huge days into Longs Peak, so I think I’m speaking with enough experience. The stays remove in seconds and the waist belt in 45. Stripped as such, the Ice Pack rides like an 18L bullet pack. I know, every single manufacturer uses the word “versatile,” but HMG certainly deserves to. Seriously, you could do a couple hours in Eldo as happily as an overnight with the Ice Pack. Though it carries loads into the 40-pound range, it also stows just a bottle and jacket without being overkill. Love the thing.

One potential downside–and summertime will tell–is the Cuben fabric doesn’t breathe a bit. On a very hot day in the sun, I bet it will feel clammy against the back, but we’ll have to wait and see. For now, in winter, it’s been great and I haven’t objected to the back material.

Fit bleeds into function, but let me hit some detailing that I’ve liked (and a couple I’m iffy on) on the Ice Pack.

The rolltop is fast, watertight and easy to use. I miss the organizational happiness a top-lid brings, but using a superlight sil-nylon zippered bag allows me to stash small stuff and chuck it in the main compartment. Pretty easy to adapt. The rolltop streamlines the pack (not to mention saving weight), especially when you cinch it down for climbing, which in part delivers the versatile/comfortable “bullet pack” feel. An interior, zippered pocket helps with the organization, but it’s fixed and when stuffed, I feel like it gets in the way. I’d rather use the above mentioned stuff sack/organizer and cut out the pocket. This way I can overstuff the main compartment without worrying about breaking glasses in the pocket or having to work around it. Give it a couple weeks with the pocket and see what you think.

Dual daisies on the sides not only allow you to clip gear, but also bump the closures for the rolltop up and down. I haven’t adjusted ‘em yet, but it might be a nice option when overstuffing the pack.

The crampon patch works just fine on the outside, though given the space I’ll usually put the spikes inside, within their own bag. I don’t like having all that weight so far from my body, as it increases the swing weight/feeling of weight on the pack. The pre-installed shock cord is plenty reliable for securing crampons, but it’s also a bit clumsy–I’ll probably remove this, too, and just use webbing straps when/if the time comes. Tool attachments (thank the good Creator above…or at least the HMG guys) are new-school and secure. I’ve got two BD packs I really like–save for their flimsy, rattly, wobbly, tool attachments. The HMG Ice Pack, despite its featherweight and minimalist design, offers secure, quiet, solid attachments via a sleeve through the base of the crampon patch (a ripstop, 210d Spectra-reinforced material), with two Fastex buckles. You won’t notice using them, which means they’re exactly what they should be: easy and secure.

Moving down, the bottom is double-layered 150d Cuben, which has withstood plenty of dropping and scuffing, with a full load. So far, so good; it remains unblemished.

The back panel is lightly padded, which feels good, but I would much, much prefer an empty sleeve into which I could put an almost-flattened NeoAir or foam pad. It’s a tiny detail, sure. The vast majority of users probably prefer the foam, but I think climbers would prefer the option of a) losing the weight and b) having a bivy pad available in their system.

HMG will customize the hip belt to your specs. I chose a small, zippered pouch on one side (big enough for a bar, small tube of sunscreen, and a lip balm) and a gear loop (with clipper slot) on the other. The whole belt hook-and-loops to the pack body behind a lumbar pad, making removal relatively fast and easy. I’ve taken to just clipping the belt behind and through the ice-tool slots when climbing and haven’t noticed it a bit.

HMG makes stripped-down, thru-hiker packs, a minimalist rock pack (the Summit), tarps, stuff sacks, accessories, and shelters, too. I haven’t messed with their other gear yet, but a buddy of mine has already gotten the 3400 cu. in. “Porter” pack and the Summit. He loves them and reports great results in terms of durability and fit. You can find some of their packs at Neptune Mountaineering, if you’re local.

Kudos to HMG for nailing it, across the board. I hear they’re working on a ski pack, too, so stay tuned.