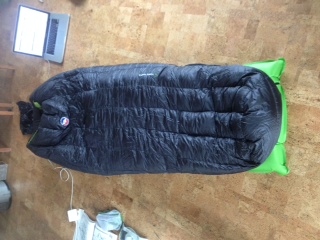 Rob CoppolilloOctober 30, 2013
Master of None0 Comments 0

Jargon, marketing, diagrams…it’s all for naught if you don’t get a good night’s rest. I thought twice before packing a Big Agnes Horse Thief 35 (852g; 1.8 lb.; $370) for a couple nights on Mount Shuksan. Despite having 800-fill down, the Horse Thief–like all of Big Agnes’s bags–has no insulation in the bottom of the bag. Makes sense on paper…but in the field, on my advanced alpine course…was this a good idea? Turns out it was a great idea! My only gripe was not trying to score an even lighter model from Big Agnes…but hey, there’s always next year, right?

I’ve known of Big Agnes products for years, but just haven’t gotten around to trying ‘em. The idea that put ‘em on the map, not using insulation beneath the sleeper, seemed logical to me. You crush your insulation, particularly down, and it quits working…so why use it? Good question. To keep the sleeper warm, Big Agnes bags feature a sleeve along the bottom into which a sleeping pad slides. You’re literally locked onto the top of the pad, meaning you’ll never slide off of it and onto the cold ground. Second good idea.

More than a decade later and I’ve tried it out. Makes me want to sell my other bags and convert ‘em all to Big Agnes. I mean, seriously–why are all these other manufacturers stuffing the underside of their bags with expensive (and ultimately useless) goose down and synthetics? You’re better off with a quality pad beneath you and putting some of your insulation across your top.

The Horse Thief falls into Big Agnes’s “Divide Superlight” category. No hood, 800-fill down, Pertex Quantum shell fabric. I still found it roomy enough in the shoulders (I’m 5’10”, wear a 41R suit jacket, 165 lbs.) and I begged for a long model, so I’d have room to dry socks in the bottom. They call it a “mummy” bag, but it sleeps more like a rectangular rig. Mission accomplished and I dozed like a baby.

BA builds these bags with more vertical channels/chambers for the insulation, rather than horizontal. They call it “Insotect” construction, but whatever the case, it’s plenty warm. I slept in my skivvies several nights in the Cascades, into the 40s and I was just fine in the Horse Thief. I’d have liked to try the next bag up, the Pitchpine 45, a lighter, quilted-construction model. Next time.

I like the pillow pocket on the Horse Thief, too–just a thin, nylon pouch that’s sewn into the head of the bag. I stuffed my pants and baselayer into it and slept like a baby. The sleeve might add a few grams at the most; simply done, unobtrusive, and workable.

I’ve only spent a week or so in this thing, but I’m thoroughly happy with it. Crazy light, compresses really well, plenty comfortable, and as warm as it’s rated/advertised–a rarity these days. The Pertex shell material hasn’t shed any down yet. Zippers are all YKK, smooth, snag-free. Great bag, psyched to use it some more!

Big Agnes also sent me their “Air Core SL” pad to use and the thing is comfortable and warm–BUT, it’s heavy (561g; 1 lb. 4 oz.). So much so, I took my NeoAir (371g; 13 oz.) on my alpine course, rather than the BA pad. In fairness, it’s almost twice as thick as the NeoAir, but still…alpine climbing and the long walk into Shuksan…no dice. Backpacking, I’d probably lug the BA model, but it’s simply too chubby for climbing. The loft/height is impressive, so I imagine it’s warmer than most others (though I’ve heard too much height/airspace leads to conductive cooling). So in summary–so far, so very good. I just pulled out the bag to shoot some expert (read: lame iPhone) photos and discovered there is a bit of down in the bottom/ground-side of the bag. I was under the impression there is none at all, but it seems there’s a bit. Why? That’s about my only question mark, though. All in all, the Big Agnes bag delivers on its word.

As for the pad–slim it down to NeoAir dimensions and I wonder if it’d be just as comfortable, but more durable than the competition. The shell material seems a little tougher than the NeoAir, so I’d love to see a lighter version and give it a fair comparison. Beyond that, though, I’m impressed with the Steamboat Springs-based company’s product. Love to try a heavier set up down the road. Maybe for my ski exam in February? Rob Coppolillo is a freelance writer based in Boulder, Colorado. He’s the author of Holy Spokes: A Biking Bible for Everyone and a contributing editor at Elevation Outdoors. He’s also an AMGA/IFMGA aspirant guide in the rock, alpine, and ski disciplines, as well as an AIARE 1, 2, and 3 avalanche professional.