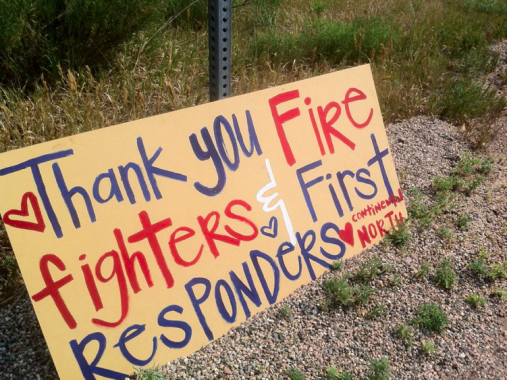 Riding through the aftermath of the High Park Fire

Just shy of 100 miles, the Poudre Canyon to Horsetooth Reservoir loop provides a tour of the area damaged by the  recent High Park fire, the second largest fire in Colorado history.

Heading west on CR 14 and starting at an elevation of approximately 5,000 feet, the ride weaves and climbs to about 8,500 feet, as it follows the course of the Poudre River. Broken cliffs of granite, gneiss and schist line the canyon walls. Every few miles a general store or house appears near the road. Rafters play in the cool whitewater.

10 miles into the ride, soon after the green, rolling hills turned to spots of burn like an animal with mange, I pulled into my first rest area. I leaned my bike against a log fence and walked over to a man and a woman sitting under the shade of the store and RV park. Through the front window in the wood cabin a red neon sign was suspended from a single hook, reading ‘open’ at ninety degrees. I asked if I could join their shade and eat the breakfast I’d packed along. They obliged. The ground beneath their white plastic chairs was speckled in cigarette ash. They were drinking cans of Busch beer at 9:30 in the morning. I wolfed down sausage, veggies and rice. The woman, the owner dressed in an oversized T-shirt, talked about the impact the fire had on her business. The man, heavyset and with a graying beard, had lost his home in the blaze and was now living on her property. He talked about his lost photographs. At one point he walked away and returned with the few items he’d been able to recover. He opened a white paper towel to reveal a flattened puddle of gold. “I bet that’s worth some money,” said the woman. This, and a few silver dollars melted together like pepperoni on a pizza, were his only physical reminders of his home, and previous life. Soon visitors from the RV park joined our scene. Beer cans popped open, cigarettes were lit up and soon my little nook of shade began to resemble a bar. I got back to the ride.

I pulled back on the road, tightly following the narrow white fog line. Sometimes trailers closely brushed past me. Rafting guide services, their rafts filled with occupants in blue helmets, navigated the waters below, as small and heavy clouds began to form overhead. At around mile 30, past the Poudre Park campground, on the right and on the same side of the road as the river, I passed the Mishawaka restaurant and concert venue.  Such acts as Gregory Alan Isakov, and The Samples have played here. For safety and shortage of parking, the ‘Mish’ as it’s called for short, provides a shuttle service for its shows. I’d recently seen a show here. The scene is like adult camp, where drinks and food are served as live music fills the canyon. No one in the crowd is responsible to navigate the tight canyon back home. Some attendees wade and swim in the water. On the left of the venue was a sign reading ‘Employee Parking Only;’ behind it was a lime green Volkswagen bus, its sliding door ajar. Employee quarters peppered the hillside. Parts of the mountains were burned. Turning left up CO RD 27, Stove Prairie Road, I instantly feel like I’m driving into a fireplace that had been doused with a bucket of water. The air smells of ash, and everything turns gray and black. Adding to the destruction are signs of a flashflood. The sides of the road have been displaced by heavy machinery. The storm clouds, now completely formed overhead, open up. Water splashes on my sunglasses and mud splatters on my jersey as I ride into the heart of the destruction. The steep hillsides and cliffs have few spots untouched by the fire, while some trees are brown, looking like beetle kill.

Junction to junction, from CR 14 to W City Road 52E, or about 15 miles feels like an unending, steep climb. I pass prairies and a few cabins. I rest at the entrance to a ranch and sit in the sharp weeds and lean back against the log fence. Eating Newtons, I reflect on the sights of the ride. I’d passed dozens of ‘Thank You Firefighters’ signs. Each one hand painted and personalized in some fashion, like replacing Firefighters with ‘FF’, or ‘Thank You for Protect’in’. Despite the fire getting very close to many of the properties, I had yet to see one burned structure.

Road 52E marked the highpoint of the ride. In front of me was a bending ribbon of asphalt cutting down a jagged canyon.  The rain had stopped, and clouds broke open to blue sky. I accelerated down the ribbon. Wind roared past my ears as speeds reached 45 mph. When the steeps were replaced by bucolic hills, signifying the dwindling, eastern tip of the Rockies, I took shelter under a bush. Using a small knife, I stabbed open a can of salmon.

I left the char and ash behind and descended away from the mountains into historic Masonville, a tiny town decorated with steel scenes of the Wild West. Two rusty figures were faced off for a duel. Cutting left, I climbed up W CO RD 38E towards Horsetooth Reservoir and the town of Stout, on the southwestern banks of the reservoir. I passed the town sign, stating population 47 1/2.

Dakota sandstone walls and steep ridges surrounded the landscape extending from Stout to the western end of Horsetooth Reservoir. Heading east and surmounting the final climb, the view dropped off to endless flatness. I roared down the final descent and headed home.

I’d set out to ride 100 miles that day and had fallen short of the mark by nearly 10 miles. On the way, I’d met a few people whose life was forever changed by the fire. I passed mountain cabins, and many properties barely spared by the raging blaze. The smell of ash was replaced by the scent of afternoon showers. I thought back to the countless signs of gratitude to the firefighters. They read like messages to fallen comrades – the hillsides may be burned, but thankfully many of the homes were spared.