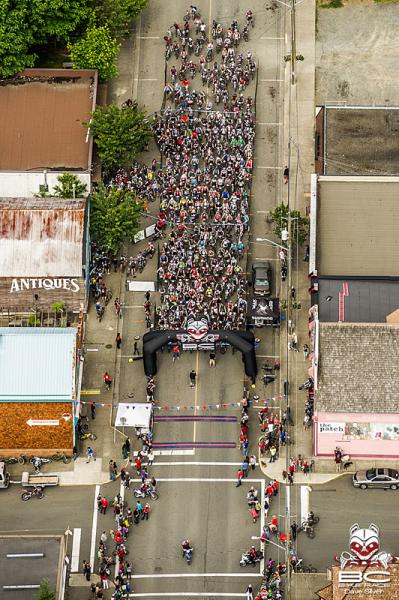 Stage 1 was here. I didn’t know what to expect, so I simply expected myself to put out my best effort.

I was pleased that I was able to stick in the lead group on the road at the start. Wendy Simms took off in front of me. I had no expectations of staying with her, so I settled into my own pace. I was riding comfortably in 2nd place. The trail was rooty, but manageable on the hardtail. I knew my body would be fresh for day 1, but it was clear that I’d be taking a serious beating from the BC singletrack. The first Gravity Enduro section was pretty exciting. As a side note, each stage had 2 timed downhill sections called “Gravity Enduro.” I think this is such a great idea for those DH oriented folks! I just tried to get the hell out of the way. There were some pretty big rock faces to ride down and some steep, narrow mud sections. I started heading down a gravel descent, following the guy in front of me. I wasn’t particularly looking for course tape. At the bottom of the gravel, there was singletrack with course marking tape. It didn’t seem right, but the course was marked so I kept going. That’s when the first disaster of the week struck. There was a guy named Jake (who is actually an Olympic rower). He was riding toward me on the singeltrack. I instantly knew I took a wrong turn. He clarified the fact and I followed him. I tried not to get frustrated and to accept that it happened and there was nothing I could do to change it. We picked up another guy who I actually knew from the Brasil Ride the first day I rode it – Roger. There were forks in the road and we explored each one trying to find our way back to where we went off course. I was so thankful to have Jake and Roger there or I still might be out there trying to find my way back! “oh great, am I going to have to use my whistle on day 1? I wish I brought my phone.” Somehow Jake found his way back to the course. At that point, about 20 minutes had gone by and the fast girls in my field.

I was extremely discouraged to start a stage race this way… 20 minutes down. I tried to think positive and blasted through the rest of the course. In the end, I finished in 6th place, and a good 15 minutes out of 2nd place. I tried to joke saying the course wasn’t long enough for me and I wanted to do some extra miles. Inside, I wanted to punch a pillow. The announcer came up to me after and said, “We were waiting for you at the finish line to do an interview, but you never came.” I hoped to give them a different story in the days to come.

I’ve come back from the bowels of adversity before, and I wasn’t going to let day 1 defeat me. That night, I heard the pitter patter of rain in my tent. It was raining…and still raining when I woke up to start Stage 2.