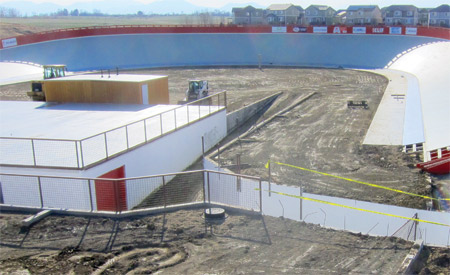 Fresh off Cyclocross Nationals held at the Valmont Bike Park, the Front Range is welcoming another permanent addition to the local cycling scene. The Boulder County Velodrome opens this summer after Mother Nature took a couple of swings at the project last year. In August severe storms caused the collapse of the entire eastern side of the track followed by the record rains in September. The crews building the rapid-fire racetrack hunkered down and are delivering a gem to all cyclists in Colorado.

Doug Emerson founder of University Bikes in Boulder and Frank Banta one of the founders of The Buff Bike Classic are the brain trust behind the nine-year project. The cycling bug bit the two CU grads back in the Red Zinger days and drove their passion for bringing a European favorite to the Front-range cycling community.

Velodrome racing offers a cardio blast unique in sports coupled with a thrill ride few ever experience. With top speeds approaching 30 miles per hour the track will be one of the fastest in the United States. The facility will be open to anyone after successful completion of an eight session training class taught by their roster of elite level coaches that includes ex Olympians, world championship coaches and elite level racers.