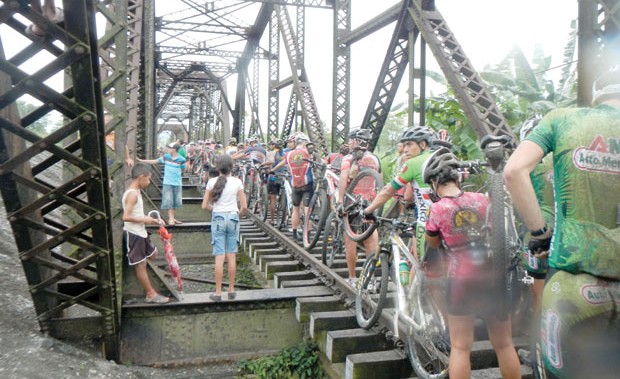 Picture railroad tracks on a bridge the length of a football field perched hundreds of feet above a crocodile infested river.  At first glance, the bridge doesn’t seem so bad. But soon, you are gingerly stepping across wet ties in stiff cycling shoes, carrying your bike and dizzy with vertigo. One slip on the dicey bridge would result in severe consequences. You wonder if anyone has ever fallen. If a train ever shows up. The bridge is so long, you can’t see the end, just a line of similar, gingerly stepping racers carrying their bikes in front of you… and stretching back behind you. There are tense murmurs in various foreign tongues. The only thing you can do now is laugh because you are deep, deep into to La Ruta.

La Ruta de los Conquistadores is a coast-to-coast mountain bike stage race across the country of Costa Rica, touted as one of the toughest races on the planet. For the 20th anniversary of the race in 2012, La Ruta reverted from a four-day, 240-mile, 39,000-vertical-feet sufferfest back to the original three-day, 160-mile, 20,000-plus-vertical-foot epic. I had heard about the miles of mud and the jungle, and I could not wait to roll into the heat of competition. For me the race presented not just a challenge when it came to racing—I have competed in brutally hard mountain bike stage races everywhere from Brekenridge to Nepal—but a chance to experience the country from the saddle.

A triathlete and record-holding distance swimmer named Roman Urbina first dreamt of La Ruta in 1981 and pulled it off a year later. “I had read a few history books and thought it was really amazing how the Spanish Conquistadors had crossed the country,” he says. “So I looked up the author of the books, met him and got his help mapping the course. Then, every weekend I would go out and ride parts of it until I had a clear idea of the whole thing. I thought it would also be a new thing to do since MTB was just starting in Costa Rica and it would help raise awareness about conserving and protecting the rainforest and rivers.”

Twenty years later in the Pacific Coast town of Jaco, the start line is blaringly chaotic at dawn as I vie for position in the start chute along with hundreds of racers from 30 different countries. Stage 1 promises 68 miles and 12,000 feet of elevation gain across some very difficult terrain, not to mention blistering hot and humid temperatures. And the pain begins at once—the first climb is a shock to the system. I’m carrying far too much water and the hill is tougher than I had anticipated.

If the whole race is this steep, I’m in big trouble, I grumble to myself as I fall back in the field.

ventually I settle into a rhythm, and we arrive in the Carrarra section in the jungle. We head downhill, but the descents are greasy, steep and slick with red mud. I let the brakes go a few times and just let the bike find its way. But it’s not long before I crash. And again. After a few more slides, I do what other racers are starting to do—run with my bike. And I begin to realize something about the mud, which is either red or white. The red mud allows for traction. The white mud is like trying to ride on ice. Hike-a-biking doesn’t bother me after some of the other big adventure-style mountain bike races I’ve done, but it’s tricky in this slop. I try to take in the beauty of the jungle, looking for a sloths and parrots in the bright green foilage.

It’s not long before, my bike sounds like a cement mixer thanks to sandy mud junking up the drivetrain. But at each river crossing, I dunk the bike in the water and try to wipe off at least some of the grit. The rumor was that La Ruta is almost all riding in the muddy jungle but it turns out that it’s only an hour and a half of it—I’m oddly disappointed because the next, more insidious, obstacle, the extreme heat and humidity, is taking its toll on me. I’m melting as I flog myself up the vertical roads.

I try to use the lion’s breath that I learned in yoga, sticking my tongue out with a roar of an exhale. It’s supposed to help dissipate heat, but, at this point, I think it probably just scares everyone around me. The breathing does give me a bit of my composure back, but I’m nauseous from the heat. Finally, I reach the end of the stage, somehow taking second place for the day with a race time of seven-and-a-half hours.

Not long after the finish, my stomach feels like a toxic balloon. Some discomfort morphs into exploding bowels. Montezuma has put his claws in me. I can’t sleep. I crawl on my hands and knees to the bathroom all night, telling myself that somehow I will have the strength to start Stage 2 in the morning. I sip weakly on water, wrestling with the decision: should I race in this state? The shrill sound of my alarm reminds me that it’s already 4:00 a.m. Stage 2 features a ride to the top of 10,000-foot Irazu Volcano outside Turrialba and I don’t want to miss that. And I definitely don’t want to miss the rocket descent to the finish (though it’s supposedly heinous). There’s only one way to know. I pull on my bike kit and try to eat some toast.

Stage 2 doesn’t start well. I’m so weak I can barely turn the pedals. I only make it six miles. Six miles that include 3,000-feet of climbing. I’m reduced to stumbling next to my bike while the entire field leaves me in the dust. I’m too weak, too sick to ride.  It’s over.

After a long argument with myself, I decide to watch the rest of the stage from a support car instead of finishing my Costa Rica trip in a hospital bed. Bitterly disappointed, I try to make the best of it. Watching the looks on my fellow racers still in the game—there’s lots of determination on those faces but also looks of defeat and anguish. And as they near the top of Irazu in foggy cold conditions after 9,000-feet of elevation gain (much of it surprisingly on pavement), there are weary expressions of relief. It’s tough to be out of the competition but those are the breaks in this sport and at least I can soak in Costa Rica instead of just grunting through pedal strokes.

The next morning, I feel somewhat normal and decide to try to ride the final stage of the race. There’s an optional rafting trip this morning before the stage starts but I figure I should just focus on riding if I’m going to get back out there. The organizers cut some nasty sections from Stage 3 compared to previous years—it’s mostly flat spanning over just 43 miles—so I think I can manage. But it starts in a sketchy neighborhood of Turrialba and I’m further deflated as I look out on a steady drizzle, but I step outside and the rain is warm. It begins to pour but it’s not sharp and painful like the cold mountain rain I’m used to back home.

Since I bailed on Stage 2, I’m out of contention for the race, so I take the opportunity to ride at a more leisurely pace near the back of the pack and snap a bunch of photos. It’s a luxury I rarely have in a race like this and I begin to enjoy it. The course is fast with a few sketchy river crossings. By the time I get to those infamous railroad bridges, there’s a 20 minute pile-up of people as we bottleneck onto the bridge. Onlookers and racers are yelling in Spanish. Anxious racers carefully step from wet plank to plank trying not to look down at the river 200 feet below. I do the only thing I can do—just keep moving.

Once our feet are back on solid ground, we have to ride down jarring railroad tracks. My eyes shake in their sockets. Specks of mud hammer my eyes. My seat jackhammers my butt with each railroad tie. My back protests. At last, we tear across beach-y terrain that parallels the teal of the Caribbean. The stage has taken just two-and-a-half hours. Despite missing the chance to podium and stomach illness, I feel joyous.

As I pedal onto white sand and make my way to the finish line, I’m greeted by a horde of zealous racers who have survived this three-day quest across the country. We share stories over Imperial, the national beer of Costa Rica, and I remember why I love adventure-style mountain bike races. No matter the results, they are always more than bike races.

Yoga is an essential part of my training, not just to keep me flexible, but also to keep me sane and grounded. I like to do a short sun salutation sequence when I’m traveling or at a race to keep my body feeling fresh and healthy. Before bed, I do a figure four on the floor, supine twists, then a final shavasana (corpse pose). And then there’s the lion’s breath, that got me through the worst of La Ruta: stick your tongue out, cross your eyes and exhale out the mouth forcefully (scare those around you). If you are not on a bike, the traditional way to practice this is in simhasana, or lion’s pose. You kneel with your right ankle over your left and your heel into you perineum (um, the taint). You then press hands to knees and splay out your fingers. Now go ahead and roar.

The founder of La Ruta expounds on 20 years of the conquistadors’ race course.

How did it feel to see the 20th race?
It felt fantastic to see over 500 racers from 30 countries sharing the joy of mountain biking, exploring and challenging themselves.

What is the biggest challenge for racers?
The total elevation gain in a single ride. Most single day races or rides do not climb 12,000 feet in 100 K, so there are some hard hills.

How does La Ruta help Costa Rica?
Costa Rica is now known abroad in the cycling community, people hear about the race and it plants a small seed of interest. It’s a great example for the youth of Costa Rica to see so many people mountain biking. This year’s winner, Paolo Montoya, was just a very young boy when his father twice won La Ruta. Paolo got picked up by an international pro team from Italy after his first win a few years ago and was able to race in Europe for a few seasons, later he went to the Olympics. Also, racers have many economic needs like hotels, food, transportation. So many dreams are born that benefit our economy in more ways than you can imagine.