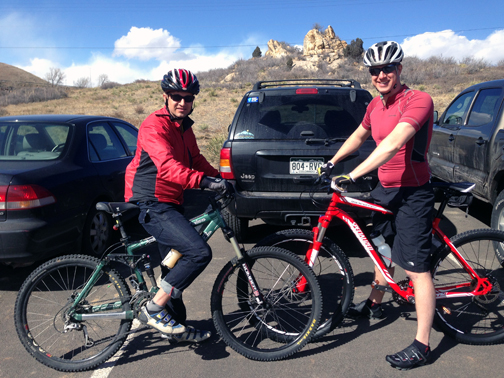 “Nice jeans,” scoffed an onlooker cyclist as I chugged my way up Lookout Mountain in Golden, Colorado.

I could tell this guy, dressed in full-length spandies, thought I was just a chuffer riding the 2,600-foot climb in a pair of straight leg Levis. That’s part of what makes the Novara Cragmont denim bike pants so appealing. They’re specifically designed for cycling but can be worn in the city or out to a casual dinner.

Features include stretch cotton, reinforced gusset with Schoeller® fabric to protect sensitive areas, reflective spots on the rear pocket and roll-up cuffs, and articulated knees. The reflective panels and thin strip of reflective thread are unnoticeable until light is reflected off them in which case they shine back. They’re warmer than thin spandies, which is great, because it was threatening to snow that day. The next day after riding I got another comment, this time at the crags at North Table Mountain. “Do you always climb in jeans?” asked one of the members of the group. I replied that these weren’t just any old jeans, and I proceeded to hip scum, knee bar, high step, and heel hook over the lip of a roof. The stretchy pants moved with me.  I’ve been climbing in them for the past month and they’ve showed no noticeable damage from grinding them against the rock.

Later that day I took them on a mountain bike ride around Red Rocks. The jeans cut the wind – it was blowing hard – and I was glad to have added protection of denim in case of a fall or when brushing against bushes or sandstone boulders.

The only setback to these jeans is that they’re skinny. This means I’ve had to adjust my style preferences when wearing them. Next thing you know I’ll probably start wearing Wayfarers and carrying a courier bag.