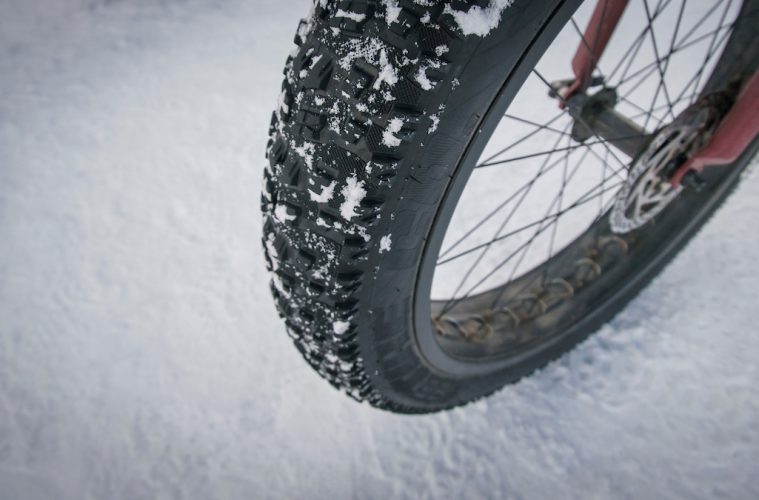 Fat Biking is Here to Stay: A Road to Coexisting

In the last ten years, fat biking has taken both the cycling and snow sports industries by storm. For avid cyclists, it’s a way to extend the cycling season. For bike shops, a way to make ends meet in the winter. For some, it’s simply a quick and efficient way to commute in a ski town, and for others it’s just a new way to recreate in the winter. Designed for riding across snow, fat bike tires have twice as much tread as most mountain bike tires, ranging from 3.5 to 5 inches wide, and a tire pressure often below 10 PSI. The extra rubber on the ground maintains traction on slick terrain and lower air pressure results in flotation over the snow.

“Since 2007 it’s really exploded,” says Sterling Mudge, president of Cloud City Wheelers, a cycling club in Leadville. “Back then, you hardly ever saw them, now all the racers have a fat bike in their fleet.” What many deemed as just another “crazy cycling fad” a few years ago is now on a fast rise to the forefront of the cycling industry. More and more manufacturers are coming out with their own model and fat bike festivals and races are popping up all over the country. The growth is exponential. The Fat Bike frenzy has the cycling community stoked, but the addition of another cross country winter activity is creating more traffic on the trails. Being a relatively new sport, there aren’t many trails maintained exclusively for fat bikes at this time. Most fat biking is done on multi-use trails, shared by snowshoers and cross-country skiers. Firm, cold conditions are ideal for fat biking and when it warms up too much the tires can disrupt the carefully groomed Nordic tracks.

In an effort to adapt to the surge in fat biking, some Nordic centers and cycling clubs have begun to groom trails specifically for bikers in an attempt to eliminate problems between recreationalists on the trail. Cloud City Wheelers grooms 8 miles of single track in Leadville, and Devil’s Thumb Ranch in Tabernash has designated 15 kilometers of their Nordic trails for bikers.

While bike-specific trails have helped alleviate tension in certain areas, the land available for winter biking is limited. As of right now, bikes are only allowed on Forest Service land during the summer season, from May 21 through November 22. Approved in 2011, the Travel Management Plan for the White River National Forest prohibits the use of all mechanized and motor vehicles on trails in the winter. This eliminates a large portion of trails for bikers, pushing them onto overcrowded Nordic trails. “When the Forest approved our travel plan in 2011, fat biking wasn’t that popular, so it hadn’t been taken into account. As it’s grown so much, things have changed and we’re reevaluating” explains Kay Hopkins, recreation planner for White River National Forest.

The International Mountain Bicycling Association (IMBA) has been working with the National Forest to propose a list of routes to be considered for winter fat bike use on Forest Service land. The proposal aims to open up a huge amount of land for bikers in the winter season. “Processes like these involving so many different parties can take a while,” says Hopkins, “but I’m confident we’ll land in a place that will work for everyone.” To encourage proper etiquette on the busy trails, IMBA recently released a list of best practices for winter fat biking — which highlights courtesies such as staying out of classic tracks for skiers and yielding to other trail users. Even with more trail space for fat biking, it’s inevitable that multi-use winter trails will still see a lot of overlap between skiers, bikers and snowshoers. “There are always growing pains figuring out how to deal with something new,” says a representative at Devils Thumb Ranch. “I would say for the most part it’s pretty smoothed over as people learn how to use the bikes correctly.”

It’s been a long road to thoughtfully introduce fat biking to the winter sports community, but there’s no denying it: the sport is here to stay.