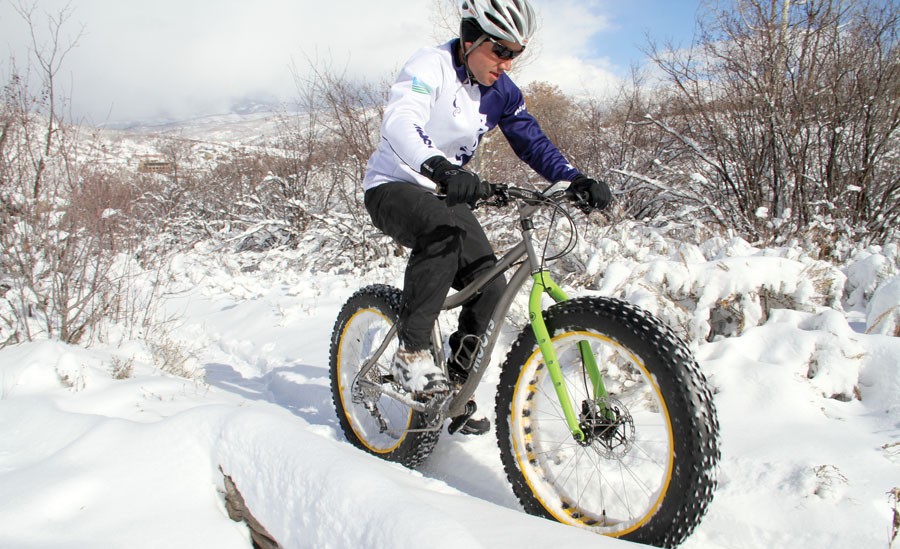 Fat Bikes: Large and In Charge

It’s been a while since mountain bike season had a beginning or an end. Clever, desperate cyclists have been adapting their equipment for some time in order to extend the riding season year-round, and the latest result has been a cartoonish rig that looks more fit for clown college than Colorado. Fat bikes, if you hadn’t already heard, are all-terrain bicycles with a tire width of up to five inches, which can handle tire pressure in the single digits. Low pressure increases the size of the tire’s “footprint,” which makes it easier to ride over soft surfaces like snow and sand.

Fat bikes have already become fixtures on groomed, public multi-use trails and mining roads throughout Colorado during the winter, but this year a few Nordic ski centers will cautiously try out fat bikes on their trails and even host races. The question is whether including fat bikes on traditional ski trails will grow the sport, or cause a clash of skiers versus cyclists.

Lake Catamount Touring Center, Breckenridge Gold Run Nordic Ski Center, Snow Mountain Ranch Nordic Center and Devil’s Thumb Ranch will all be giving fat bikes a whirl this winter. Howelsen Hill Ski Area, which is owned and operated by the city of Steamboat Springs, was also recently approved for fat bike use, but its success during this inaugural season will depend largely on the cyclists who use its groomed trails.

“We are counting on an educated user group to be responsible about when to ride, realizing that conditions need to be right for them to enjoy the trails and not damage them,” said Craig Robinson, Howelsen’s facilities supervisor.

Robinson added that Howelsen will be working with local bike shops to have them help educate new riders about opportunities for riding on the groomed trails, how to purchase a required Nordic ticket, and other riding opportunities in town. Will it work? “Fat biking is so new that not that many Nordic centers currently have trail use now for us to have much anecdotal information to study,” said Chris Frado, executive director of the Cross Country Ski Areas Association. “We are currently surveying our membership as to their present policy in regard to fat tire bikes on the trails in the winter. It’s certainly on our radar but there’s no consensus and, for many operations, it’s not even on the radar. That’s our job—to pave the way, to embrace new user groups while still serving the skier market. I anticipate that more areas will experiment with fat bikes in the next 3-5 years. Where it goes from here is anyone’s guess.”

Since the courtship between fat biking and Nordic ski centers is just starting, strong dissent has yet to emerge, but if haters are gonna hate, then concerns include destructive behavior that will ruin trail conditions and a lack of respect for other trail users. Frado explained that snow conditions have to be hard enough so that the tires don’t damage the trail by making deep tire ruts on the groomed surface or obliterating the groomed tracks. She added that there also has to be good communication between the Nordic center and the bikers so that the trails can be used responsibly. This means that tire pressure maximums will need to be communicated according to conditions, and that trails that are off-limits to bikes are respected.”

Trail conditions are key for fat biking. This isn’t a powder sport.

“Ideal conditions for fat biking would be packed or groomed trails,” said Nate Bird, sports and outdoor sales manager for Honey Stinger in Steamboat Springs. “If there’s more than a few inches of snow, it’s pretty dang tough to move. Or, and this is more in the springtime with consistent freeze/thaw cycles, crusty conditions where you’re not sinking through the snow can also be ideal.”

Of course if you can ride it, then you can race it and, since sometime in the mid-90’s, mountain bike racers have been heading to Leadville each winter for the Winter Mountain Bike Race Series put on by Leadville’s Cloud City Wheelers (CCW). But Chris Plesko was the first rider to race a mass-produced fat bike when he showed up on a purple Surly Pugsley at a CCW race back in January 2008.

“The Pugsley was the only real production snow bike at that point,” Plesko said. “I was running 3.7-inch wide Surly Endomorph tires at about 10 psi, sometimes down to two or three psi if the snow was really soft.”

Plesko finished second in that race but went on to win the other two plus the series title. The other racers, who were equipped with so-called fat tires that measured at most 2.7 inches in width, couldn’t match Plesko’s performance and, whereas they sank in the snow and lost all momentum, Plesko, an already formidable racer, virtually floated over the surface to land on the podium over and over again. Fat bikes have certainly infiltrated winter races. The CCW race series, set to kick off this January 18, 2014 at Copper Mountain with the Copper en Fuego, has been compelled to feature a category for racers not on fat bikes. Alaska has its famous Iditarod Trail Invitational, a 350- or 1,000-mile bike-foot-ski race across Alaska’s southwestern region. The 2014 edition, which starts on February 23, sold out of entries in early May 2013 and 41 of the 50 racers will be on fat bikes. The Midwest, which most people agree is the epicenter for fat biking in North America, features an eight-race fat-bike series spread across Minnesota, Wisconsin, and Michigan. New England is getting into the game with the recently announced Moose Brook Fat Bike Race, scheduled for January 26 in Gorham, New Hampshire.

Back here closer to home, the Abominable Winter Fat Bike Race on January 25 in Como has been selected as the 2014 Colorado Fatbike Championship, and two of the four Leadville races plus the Abominable race were chosen to be part of the Mountain Fatbike Series, which feature events in Colorado, Wyoming, and South Dakota. Crested Butte’s second annual fat bike race will fall on the same weekend as the annual Alley Loop Nordic Marathon. The biggest driver for the trend, though, may, oddly enough, be its accessibility. “Fat bikes aren’t very expensive,” explained Sterling Mudge, chair of the Cloud City Wheelers and one of the race series organizers. “You can get a good fat bike for $1,300 or $1,400 so a lot of people are investing in fat bikes, and it’s quadrupled since the whole thing started.”

Increasing numbers of bike manufacturers offer some version of a fat bike, from a stock frame in steel, titanium, or carbon fiber to full custom. In Colorado, Moots has found success with its “Frosti” and exclusive manufacturers of fat bikes, like the Fat Bike Company in Colorado Springs, whose debut model, the Borealis Yampa, rang up sales to the tune of $1 million in its first three months, will be launching its fatbikesupply.com website next summer. 2014 marks the first year in which big brands like Trek and Specialized have bought into the trend.

Beyond the bikes, though, it’s the riding itself that fuels the fat bike craze. Extending the bike season opens up the joys of exploring the wild in winter to more than skiers. Now having legitimate places to ride, like Colorado’s Nordic centers, seem to confirm that the trend’s traction may just go big with the mainstream.

Want to get  in on the action? These Colorado nordic centers will allow fat bikes.

YMCA of THE ROckies—Snow Mountain Ranch: Will allow fat biking at their discretion. Day pass is $15. ymcarockies.org

Wendy Booher is moved by mountain biking, literally. She left her New England roots (and rocks) to move to Spain, where she writes about mountain biking in English and Spanish.