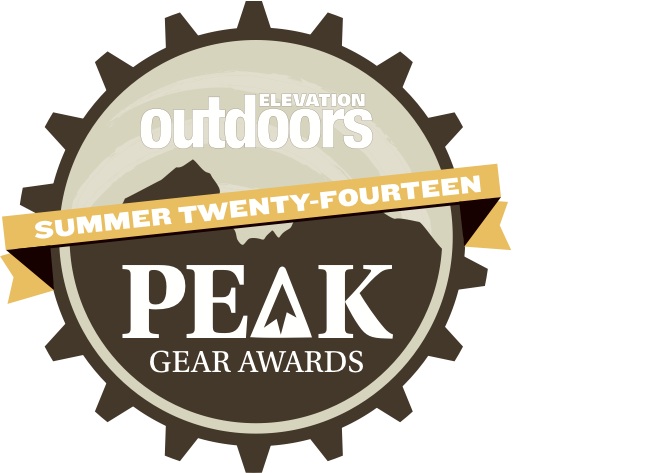 We introduced this accolade over the winter and it was a hit with readers and gear manufacturers alike. The key here is authenticity. This gear got used. Battered in fact. The philosophy behind how we chose the winners was simple: We asked our top contributors—who, we are proud to admit, spend far more time hiking, backpacking, biking, climbing, paddling, etc. than they do “working”—what was the best gear you used over the past year? What gear can’t you live without? What gear changed your life?

$250–$440; sierradesigns.com
Sierra Designs reinvented the basic principles of how a sleeping bag works in this series that includes a wide range of mens’ and womens’ models that feature the choice of either 600- ot 800-fill DriDown and two- or three-season options.

Why It Won: This was the sleeping bag that those of us who toss and turn in the usual mummy design have been waiting for—part bag, part quilt, part puffy jacket, it allowed us to sleep the way our tired, tossy-turny bodies wanted to sleep. It also adapts to the conditons: toss open the quilt on balmy evenings or batten down when it gets chilly. And the hot sleepers among us simply used it more like a blanket than a bag. We featured it in our May 2014 Festival Guide, since it’s ideal for car camping, but we also found it a perfect bag for the backcountry.

$200; mountainhardwear.com
This synthetic insulator—that works just as well as mid-layer as cold-day shell—weighs in at a silly 9 ounces. It’s stuffed with Mountain Hardwear’s warm Thermal.Q Elite 60 gram insulation, which retains its insulating properties even when wet.

Why It Won: The Thermostatic managed to stand out above a very impressive crowd of technical jackets. The extreme lightweight and packability pleased the minimalists on staff and out in the mountains—but we also could run errands and commute around town in it without feeling like we looked too techy. Most importantly, it offers up a surprising amount of protection from the cold. Plus, many brands seem to skimp on the zipper, but the silky smooth action here made it easy to operate, even with numb hands or mittens.

Where We Took It: Thru-hiking the Colorado Trail. Car camping in Salida. Longs Peak. Big day hikes in the Gore Range and Indian Peaks.

$220; us.icebreaker.com
This long-sleeve hoody represents the peak of merino wool’s evolution in performance clothing. It has all the temperature-adaptive, comfy properties of merino, plus a bit of stretch and nanotechnology to ward off spills and rain squalls.

Why It Won: One word — Versatility. This baby is both a layering piece and a shell and it features a tremendous comfort range in a variety of temperatures and weather. The water-resistant treatment worked. The hood, thumb loops, and full-zip were just enough features without overloading it. And even though you can work out in it, you don’t look like a jock dork wearing it around town. We ended up choosing this piece more than any other layer day after day, no matter what we were headed out to do.

Where We Took It: Where didn’t it go? Vail. Moab. Hikes in the Flatirons. It even went to Disney World. One contributor wore it running to work and then out for dinner that night. He swears his date didn’t think he stunk.

$120; projectemotion.pearlizumi.com
Pearl Izumi has found the sweet spot between speed and support in this minimalist that weighs in at 9.9-ounces with a 4mm drop, this lightweight, low-profile shoe has enough oomph for long ultras but is still nimble and lively for gnarly local trails.

Why It Won: It’s a trail runner that can do everything well: it had no problem eating up rugged, rocky, root-strewn singletrack with mud, slickrock and creek crossings. It digs in for steep climbs and descents. One contributor has also taken them on the road and, hey, won some races. They’re quick enough to notch personal records but burly enough to handle the toughest trails.

Where We Took It: Boulder Mountain Parks. The pavement. Telluride. The mountain tops and river bottoms of southern Appalachia.

$135; scarpa.com
This do-it-all clmbing shoe combines a self-molding suede upper and padding in the tongue for comfort with active randing and a VibaramXS Edge sole for stable performance on the rock.

Why It Won: The Force X shatters the myth that to climb hard and well your feet must endure horrendous pain. The Force X crushed it on a wide variety of routes (trad and sport) and different rock across the country and they’re somehow as comfortable as a climbing shoe can be.

Where We Took It: From sending runout 5.10 to cruising all-day 5.8, the Force X was our go-to shoe. They handled sessions at the Boulder gyms. They endured 15 pitches in a day in Red Rocks, Nevada. And they onsighted 10c R, a slabby 5.6, hand cracks and thin faces.

$160; salewa.us
With a Gore-Tex liner and weighing just 14 ounces this approach shoe works well as a daily hiker, too.

Why It Won: Durability. This shoe gave us the support we needed on rocky hikes that demanded it—without all the bulk of a classic hiker. Our climbers loved how it handled on the rock and appreciated that it had more structure than a traditional approach shoe. The Wildfire is sticky enough for exposed approaches and crazy comfortable for those hateful descents. That meant it made long Lumpy Ridge or Red Rocks descents a sightseeing tour rather than a death march.

Where We Took It: Busting up to the Flatirons, around town, running through the airport in Denver. It’s proved its mettle on casual hikes up Boulder’s Gregory Canyon and Green Mountain, boulder hopping up to Western Spaces wall and speed-hiking into Solar Slab. We even used it on a backpacking trip in Utah slot canyons.

$85; sogknives.com
This innovative, easy-to-grip blade features six powerful LED lights that project 37 lumens—which make it a camp flashlight as well as a knife.

Why It Won:  What dude doesn’t want the ultimate big boy toy? This is one blade (and flashlight, of course) that we use now on an almost daily basis, whether we are cooking around a campfire, working on our truck in the dark or looking for our dog in the bushes. It came in handy in countless situations. Plus, the design of the case is sleek and functional, making it easy to carry everywhere, every day, whether we thought we were going to need it or not.

Where We Took It: Campouts, backpacking trips and adventures from Yosemite National Park to Summit County to the mountains of Virginia and Tennessee.

$85; outdoorresearch.com
Named after one of Yosemite’s most legendary climbs, the nylon Astroman shirt serves up UPF 50+ protection and stretches, wicks and breathes.

Why It Won: Our significant others don’t like this shirt anymore—because we never take it off. Indeed, it never seems to stink, wicks sweat and rain, feels breezy and will tackle everything from sun-exposed climbs to mountain biking to desert hikes to chilling on the EO cruiser ride to Upslope Brewery. It’s the perfect pack-light road trip shirt.

Where We Took It: Absolutely everywhere—from Asia to Ireland and Moab in between.

$310; hyperlitemountaingear.com
Built with nigh-indestructable Cuben fiber, which was first developed for the sails in America’s Cup racers, this roomy hauler weighs a scant 2 pounds.

Why It Won: For such a durable pack, it’s shockingly light and unbelievably comfortable, even while hauling a full 45-pound load. It offers up everything we wanted in a multi-day or thru-hike pack and nothing that we didn’t. The 3,400 cubic inches (plus another 600 in the mesh stuff-it pockets), meant one thru-hiking tester was able to fill it with a lightweight three season set-up of sleeping gear and apparel, 10 days’ worth of food, stove, fuel and four liters of water in the hydration sleeve and still had room to spare under the velcro, roll-down storm top. As if that were not enough, the Cuben fiber material is also fully waterproof.

Where We Took It: A record-breaking thru-hike attempt on the Colorado Trail. Indian Peaks alpine trips. Utah slot canyons.

$25 for single/$120 for five-pack; camp-usa.com
With a featherweight and ultra compact Nano 23 biner on the gear end, full-sized Photon Wire on the rope end and connected with a 10mm Dyneema (the same super-strong material the military uses for helmets and battle armor) runner, these alpine-draws are compact, versatile and handle exceptionally well.

Why It Won: On route, they allowed us to extend pitches without experiencing bad rope drag and without weighing us down (they tip the scales at just 2.6 ounces each). Besides being incredibly strong, Dyneema also sheds water, which means the slings work just fine in foul weather, and that makes them ideal for committing alpine routes. They’re the lightest, most compact, full-sized, extendable quick draws on our rack.

$110; ospreypacks.com
Osprey’s new Rev series of panel-loading packs was designed with speed in mind. At 12 liters, this version weighs in at 1 pound, 10 oucnes with a reservoir (included). That made it ideal for all our favorite cardio activites, from speed hiking to mountain biking.

Why It Won: Effective minimalism: The pack is very simple and noticeably light, but that does not mean it doesn’t have some smart little features that we put to use on the trail as well. There’s a GPS pocket on the shoulder strap, an expandable food pocket on shoulder strap and side-loading mesh pockets that we could actually access with the pack on. But the thing that sealed the deal was the intuitive bladder and pack integration system that kept the bladder from morphing into a big, fat water balloon on our backs.

Where We Took It: All-day epic mountain bike rides in Sedona. Moab.Hikes in the Flatirons.

$1,149; wavesport.com
With continuous rocker and a unique distribution of volume, this boat was built for raucous water.

Why It Won: The Recon 83 was super-comfortable right out of the wrapper—we truly appreciated that we didn’t have to go through the dull process of cutting hip and foot pads to make it fit. But most importantly, it is one of the best handling  boats we have put to the test in a long time. That maneuverability—and its bombproof construction—made us more confident when we hit big water.

Where We Took It: It held up to everything we could throw at it on rock-strewn, Class IV-V Fish Creek near Steamboat, as well as Gore Canyon.

$3,950–$6,186 (depending on build); ibisbicycles.com
The suspension and surrounding geometry is the key to this 120mm-travel carbon 29er trail bike that will climb just as well as it bombs descents. It employs a dual eccentric take on the DW-link suspension that has been so effective in keeping plush bikes rigid when pedaling uphill.

Why It Won: This bike does it all. The Ripley 29 is light enough to race but burly enough to shred. Plus, those big wheels rolled over obstacles and let loose on open singletrack. And it never felt like a big bike, staying nimble when navigating switchbacks or rolled down drops. Meet the bike our contributors would buy if they had to buy just one (and didn’t get to ride ridiculously expensive test bikes).

$460; brooks-range.com
This 40-square-foot tent was made for backpacking minimalism.

Why It Won: At just three pounds, it is incredibly light for a three-person tent. Sure, it’s not free-standing, but it stood up to blustery wind and driving rain.