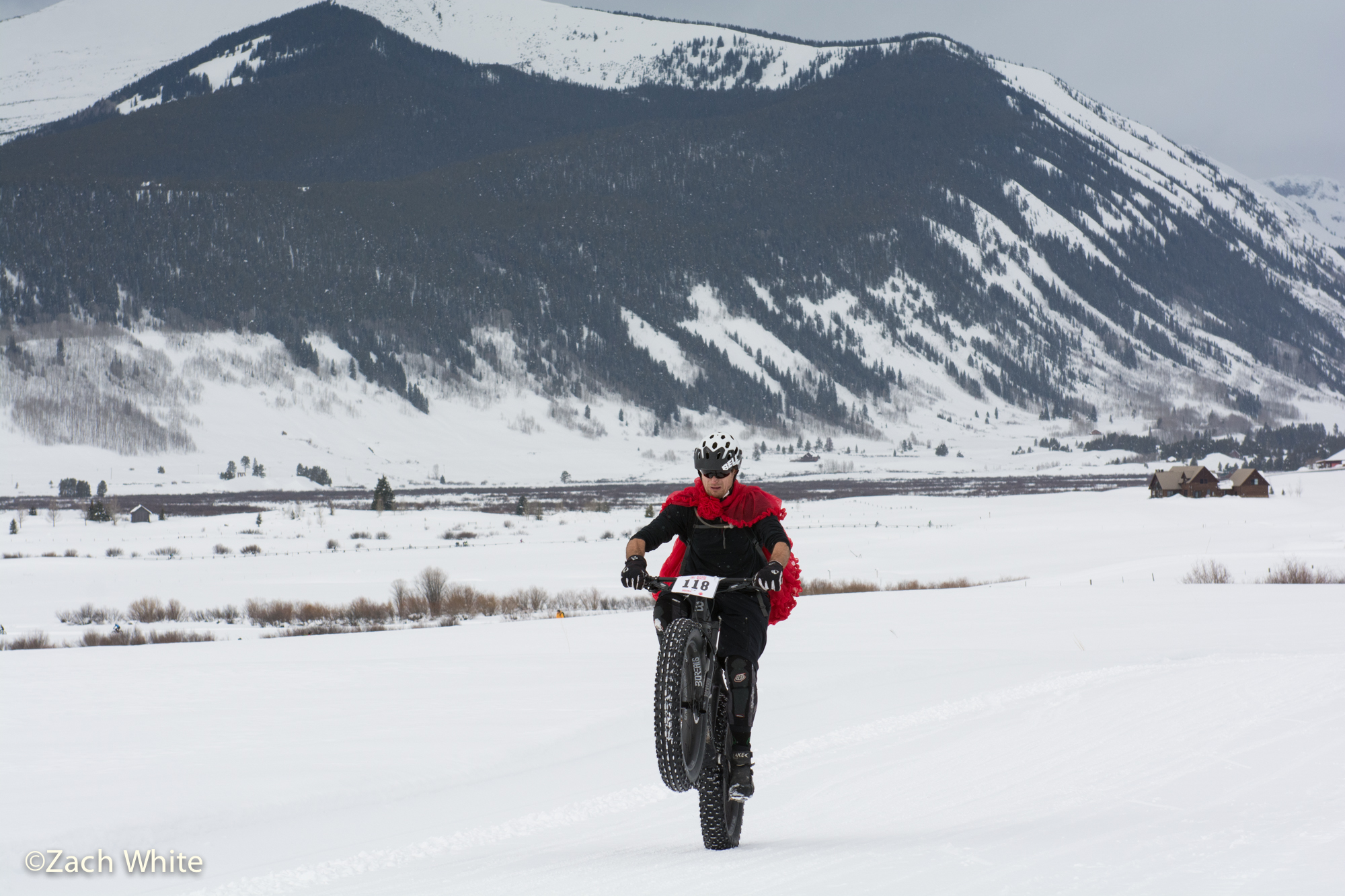 Crested Butte’s inaugural – and unofficial – Fat Bike World Championships was reported to be a touch-and-go event that almost had the plug pulled due to lack of pre-registered racers. But, in the week leading to the race, numbers grew from a mere 30 racers who’d signed up between October and December, to 260 riders lining up for several laps on Crested Butte’s wide, groomed and rolling nordic trails.

A mix of riders and attitudes from different cycling niches created an interesting event on the outskirts of the small, snow-blanketed mountain town. Some followed the promotor’s lead in attempting to create what seemed like want of a winter version of Single Speed World Championships, complete with a last-second idea to have the winners branded with the race’s logo. But, the 5-lap, 30-mile, singletrack-free course drew much more of a racer crowd than a rowdy one. And, all but one amateur winner opted for the branding – which happened somewhat stealthily behind the burger stand after awards.

The vanilla course catered to pro road racer, Robbie Squire, who won the men’s division, but had only ridden a fat bike a couple of times before the race. This seemed to be a theme sprinkled throughout the field, as many riders admitted to racing on a borrowed bike for the event, giving the impression that veteran fat bike riders like the legendary Travis Brown(who placed third) were the minority in the field.

Temperatures hovering in the 20’s, with cloudy skies threatening to unleash what was forecast to be a heavy snow, kept most clothing choices more functional than fashionable, by comparison of Single Speed Worlds. But, a solid handful of racers opted to bring their own flavor to the event, with such ensembles as a Reno 911 cop uniform, a Cookie Monster costume, and numerous fairy wings and ironically aero helmets.

In addition to Saturday’s main event, Crested Butte held a demo day, an untimed pre-race, and a Fat Bike conference, which allowed the opportunity for bike industry folk to discuss the state of the quickly-growing segment. Much of the discussion was about the winter-specific variations to decades-old dilemmas mountain bikes have in regard to access. Instead of concern about hiker conflict on singletrack, fat bikes are having difficulty gaining acceptance from the nordic community, and therefore their groomed trails that offer the packed snow conditions ideal for fat bikes. Some ski resorts are discussing grooming fat bike specific trails, while others are open to allowing them to mix into their nordic trails with skiers.

Sunday’s downhill event was an “untimed race”, which essentially got cancelled due to heavy snow that made the courses all but impossible to ride. Apparently, while fat bikes are synonymous with snow biking, they don’t actually do very well on anything but packed snow.

Overall, the event seemed like a great start to what has potential of becoming an annual race in Crested Butte. It’ll be interesting to see if other fat bike events attempt to compete with the self-claimed and unofficial “World Championship” title, or if the fat bike community will honor Crested Butte’s claim.