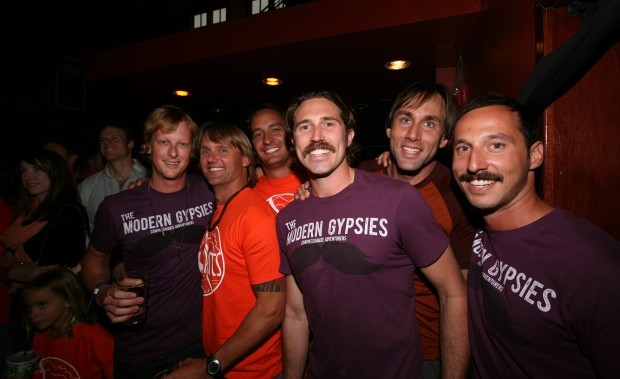 Team No Limits from Boulder hosted a huge party at the Lazy Dog Bar & Grill on Thursday night to watch the final episode of ABC’s Expedition Impossible TV competition show. No Limits was one of four teams to make it to the final episode as teams were eliminated over the previous few weeks. Also in attendance were The Gypsies the winners of the show.

Over 600 people purchased tickets to attend the event at The Lazy Dog and the proceeds, along with the silent auction, private donations and a percentage of beer sales, went to the two charities of choice, No Barriers USA and Free the Children.

Jeff Evans from Team No Limits spoke to the crowd as the episode started to air on the East Coast and implored everyone to stay off of Facebook and their mobile devices not to spoil the ending before or while the crowd was watching it here in Boulder. Each of the members of No Limits as well as The Gypsies had a chance to speak to the sea of fans gathered at the Lazy Dog to express their gratitude for everyone’s support. Some roasting went on as well as Jeff played a series of clips to highlight the athletic prowess of teammate Erik Weihenmayer. Erik got his revenge though in pointing out how he had perfect form on the Leap of Faith while Jeff had limbs going in every direction.

The Gypsies each took a turn expressing how the show and the making of it became much more than they expected by gaining such good friends in the members of Team No Limits. Expedition Impossible’s Executive Producer, Lisa Hennessy, was also in attendance and when she had the microphone she shared an email from a mom who used the show and Team No Limits as a character building moment for her son. In short, when the mom asked her son what he gained from watching the show he said he would strive to be brave like Erik, strong like Ike and compassionate and helpful like Jeff.